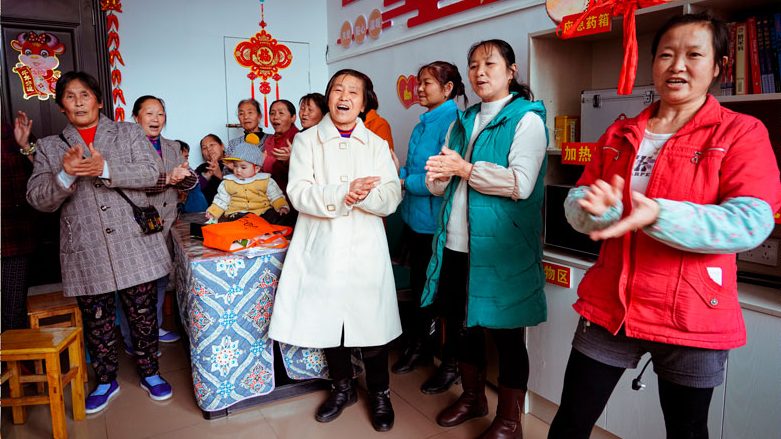 The Eradication Of Extreme Poverty In China

Above photo: Women who migrated to the Wangjia community participate in local activities at the community centre in Tongren City, Guizhou Province, April 2021.

The Greatest Anti-Poverty Achievement in History.

On 25 February 2021, the Chinese government announced that extreme poverty had been abolished in China, a country of 1.4 billion people. This historic victory is a culmination of a seven-decade-long process that began with the Chinese Revolution of 1949. The early decades of socialist construction laid the foundation that was deepened during the reform and opening-up period. During this time, 850 million Chinese people were lifted and lifted themselves out of poverty; that is to say, 70 percent of the world’s total poverty reduction took place in China. In the most recent ‘targeted’ phase that began in 2013, the Chinese government spent 1.6 trillion yuan (US$246 billion) to build 1.1 million kilometres of rural roads, bring internet access to 98 percent of the country’s poor villages, renovate homes for 25.68 million people, and build new homes for 9.6 million others. Since 2013, millions of people, state-owned and private enterprises, and broad sectors of society have been mobilised to ensure that – despite the pandemic – China’s remaining 98.99 million people from 832 counties and 128,000 villages exit absolute poverty.[1]

In 2019, as China entered the last stages of its poverty eradication scheme, UN Secretary General Antonio Guterres said, ‘Every time I visit China, I am stunned by the speed of change and progress. You have created one of the most dynamic economies in the world, while helping more than 800 million people to lift themselves out of poverty – the greatest anti-poverty achievement in history’.[2]

While China has been fighting poverty, the rest of the world, especially the Global South, has experienced a downward turn. United Nations agencies report a great reversal in poverty elimination outside of China: in 2020, over 71 million people – most of whom are in sub-Saharan Africa and southern Asia – slipped back into poverty, marking the first global poverty increase since 1998.[3] It is estimated that the economic crisis accelerated by the pandemic will drive a total of 251 million people into extreme poverty by 2030, bringing the total number to over one billion.[4] That China was successful in combatting poverty in a time of such reversal is neither a miracle nor a coincidence, but rather a testament to its socialist commitment. This stands in contrast to capitalist societies’ indifference to the needs of the poor and the working classes, whose conditions have only worsened during the pandemic.

This study looks into the process through which China was able to eradicate extreme poverty as a fundamental step in constructing socialism. Based on a range of Chinese and English sources, the study is divided into five key parts: historical context, poverty alleviation theory and practice, targeted poverty alleviation, case studies, and the challenges and horizons ahead. Tricontinental: Institute for Social Research also conducted interviews with leading Chinese and international experts and made field visits to poverty alleviation sites in Guizhou Province, where the last nine counties lifted out of poverty are located. There, we visited poor villages, industrial projects, and relocation sites. We spoke with peasants, Party cadres, business owners, workers, youth, women, and elders who have been directly impacted by and have participated in the fight against poverty. Woven throughout the text, their stories are just a few among the millions who have contributed to this historic process.