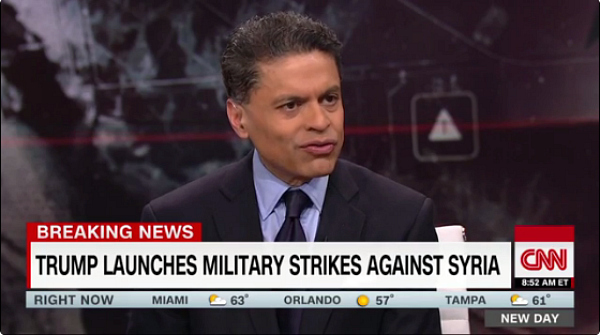 Above Photo: Fareed Zakaria: Presidents “don’t need to go to a pesky Congress every time they want military force.”

“I think Donald Trump became president of the United States” last night, CNN host Fareed Zakaria said when asked about the significance of Trump’s airstrikes on Syria (New Day, 4/7/17). “I think this was actually a big moment.”

His explanation is worth quoting at length for its distillation of the classic pundit attitude toward presidential violence:

Because candidate Trump had said that he would never get involved in the Syrian civil war. He told President Obama, you cannot do this without the authorization of Congress. He seemed unconcerned with global norms.

President Trump recognized that the president of the United States does have to act to enforce international norms, does have to have this broader moral and political purpose. President Trump realized, as every president has for many decades now, that presidents always believe they have inherent legal authority as commander in chief. And they don’t need to go to a pesky Congress every time they want military force.

So I think that what is interesting is even the way in which he justified his actions, President Trump did–for the first time, really, as president, he talked about international norms, international rules, about America’s role in enforcing justice in the world. It was the kind of rhetoric that we have come to expect from American presidents since Harry Truman, but it was the kind of rhetoric that President Trump had pointedly never used, either on the campaign trail nor in his inaugural.

So I think there has been an interesting morphing and a kind of education of Donald Trump.

Note the assurance with which Zakaria insists that a military attack on a sovereign state, unauthorized by the United Nations and unjustifiable in terms of self-defense, signifies a new respect on Trump’s part for “global norms” and “international rules.” Clearly, for Zakaria as for most pundits, the norm is that international law does not apply to the president of the United States–a doctrine that is usually referred to by the euphemism “American exceptionalism.”

Note, too, the contempt with which Zakaria dismisses the idea that a “pesky Congress” should constrain a president’s ability to make war; who needs a constitutionally mandated declaration of war when you’ve got a “broader moral and political purpose”?

Zakaria’s remarks recalled the comment by CNN‘s Van Jones (2/28/17) after Trump celebrated the widow of a Navy SEAL who died in a botched raid in Yemen that killed nine children: Trump “did something tonight that you cannot take away from him. He became president of the United States.” They also recall the prediction made by Alex Pareene (The Concourse, 3/1/17) after the pundit reaction to that speech:

Now that Trump has learned that there is a direct relationship between a president’s body count and how “presidential” the mainstream political press considers him to be, the whole world is fucked.

But Zakaria also evoked a voice from an earlier generation of war punditry, the New York Times‘ R.W. Apple (12/21/89), who said after the elder President George Bush invaded Panama that Bush had completed

a presidential initiation rite [joining] American leaders who since World War II have felt a need to demonstrate their willingness to shed blood to protect or advance what they construe as the national interest…. Panama has shown him as a man capable of bold action.

Apple (8/12/90) later praised Bush as “tough,” “determined” and “statesmanlike” after Bush warned following the Iraqi invasion of Kuwait that “American soldiers and American hostages may have to die.” “In forceful terms, Mr. Bush sought to prepare the whole American nation for the prospect of bloodshed,” was how Apple put it.

Zakaria was not the only talking head striking nostalgic notes as he commented on the US’s latest violence. Brian Williams, reporting the breaking news on MSNBC (4/6/17), rhapsodized about the beauty of the Tomahawk missile:

We see these beautiful pictures at night from the decks of these two Navy vessels in the eastern Mediterranean. I am tempted to quote the great Leonard Cohen: “I’m guided by the beauty of our weapons.” And they are beautiful pictures, of fearsome armaments making what is, for them, a brief flight over this airfield.