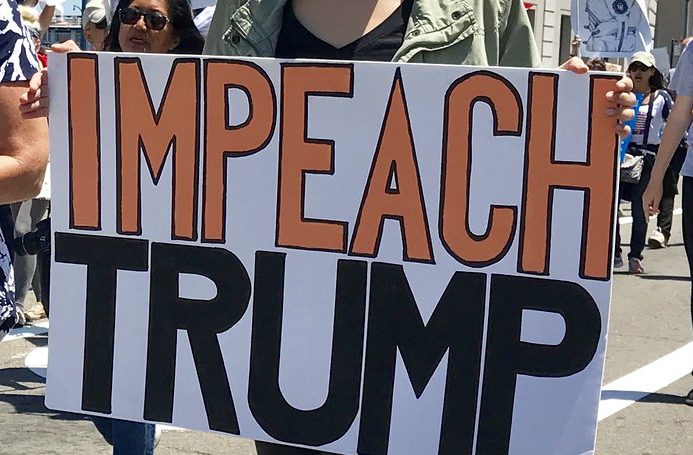 The Failure Of Trump’s ‘Coup’: A Victory For The US Empire

Above photo: From the Connecticut Mirror.

But the Left gets on their bandwagon.

The Democrats’ second trial of Trump ends like the first: the outcome known in advance, the entire process designed to sell to the anti-Trump masses that the Democrats were leading some progressive counter-attack. Both impeachments enabled these politicians to present a national diversion to avoid addressing real issues the US people suffer from: the pandemic, lack of vaccines, no national health care program, increasing homelessness, closed schools.

The Democrats’ first impeachment over Trump’s phone call to Ukraine aimed to sully his name for the benefit of the 2020 Democratic presidential campaign. they purposely did not address Trump’s actual crimes: his cruelty to Latino immigrants on the border, his indifference to  police abuse of Blacks and Latinos, his racist attacks on non-white US citizens and residents, his neglect of the threat of global warming, funding the genocidal war against Yemen, bombing other countries, such as Syria, illegal and cruel sanctions on Cuba and Venezuela.

The second impeachment, for the vague charge of “incitement of insurrection” sought to permanently ban Trump from “holding any office,” removing him as an election opponent in 2024. The Democrats reduced themselves to presenting as “evidence” of inciting insurrection Trump’s statement “’if you don’t fight like hell you’re not going to have a country anymore.” However this insubstantial statement could easily be used to indict any progressive social change movement, much as the Smith Act of 1940 had been used against leftists. The Democrats conveniently avoided mention that Trump in his January 6 speech explicitly told protesters to “peacefully march to the Capitol.”

The second impeachment also charged Trump with refusing to accept the November 2020 election results. However, the Constitution states Congress must officially certify the Electoral College votes and the presidential victor, giving Trump the constitutional right to challenge these votes in Congress. The articles of impeachment concluded “Donald John Trump, by such conduct, has demonstrated that he will remain a threat to national security, democracy, and the Constitution”. Whatever our opinion of the man, this only continues the Democratic Party-national security state McCarthyite campaign against Trump begun in earnest in 2016. Trump’s second acquittal marked a setback for this McCarthyism the Democrats have been pushing.

Trump’s “coup” and the Democrats’ “coup”

Trump’s attempt on January 6 pales in comparison to the Democrats’ well-orchestrated lawfare coup operation set in motion in 2016. As Consortium News, The Grayzone, Stephen Cohen, Glenn Greenwald have documented,  by late 2015 the Democrats were working with national security state officials to paint Trump as beholden to Putin – including stories of Putin’s alleged ownership of “pee tapes” of Trump with prostitutes in Moscow hotels. The Democrats funded the Steele Dossier fabrication, beginning a years-long fact-free story of Trump collusion with Russia to steal the election.

While Democrats charge Trump with propagating his Stop the Steal story, they have not renounced their own fake Trump-Putin collusion story. In fact, it set the stage for their first impeachment. House Speaker Nancy Pelosi even tweeted – after Congress certified the 2016 Electoral College vote “Our election was hijacked. There is no question. Congress has a duty to #ProtectOurDemocracy & #FollowTheFacts.”

The continuous Democratic Party double standard and hypocrisy in relation to Trump explains a great deal of his supporters’ anger. As Scott Ritter noted, “For the supporters of Donald Trump, the events of Jan. 6 did not occur in a vacuum but were rather the culmination of what they believed to be a four-year campaign to undermine the legitimacy of the president they voted for and, by doing so, disenfranchising not only their vote, but by extension their role as citizens.”

The second impeachment show intended to divert the 81 million Biden voters from their expectations and demands for progressive change, given the Democrats have won the presidency and both houses of Congress. It stifled any budding movement demanding the Democrats take action for a national health care program, a bailout for the people, a jobs program, a Green New Deal, etc. Their impeachment spectacle sought to vilify Trump and his supporters, as well as solidify what Glenn Greenwald describes as the new alliance of the national security state, Wall Street, Silicon Valley, Bush era neo-cons, and mainstream corporate media with the neoliberal Democratic Party.

Who were the Trump voters

Central to the Democratic Party – and even leftist – spin is that Trump supporters are racist, sexist white men, the “deplorables.” This prejudiced stereotype hardly explains why 9 million Obama voters switched to Trump in 2016. Nor explain why, after four years of hostile mainstream media coverage, he won 10.5 million more votes in 2020.  A look at the 2020 election voter breakdown contradicts their condescending stereotype.

The group where Trump lost vote share involved white men, even though he won 35% more of the white working class vote than Biden. In 2016, Trump won 65% of the white men vote; in 2020 it fell to 61%. This hardly squares with liberal and pro-Democrat mythology that a Trump supporter is a racist white man.

The US leftist movement co-opted by the Democratic Party

Despite the November election choice coming down to two corporate neoliberals disliked by the great majority of the US population, more than 159.6 million Americans turned out to vote. The corporate rulers’ effort to neutralize popular opposition to their two parties and lure in social movements was so successful that the election turnout marked the highest percent of  voter population in 120 years, 66.7%. Even leftist groups capitulated, dressing this up as “fighting fascism” as they climbed aboard the two corporate party bandwagon.

Typically, every four years the liberal-left, in order to justify a vote for the corporate Democrat presidential candidate, tries to paint the Republican candidate as a herald of fascism. In Fascism? First Two Months in Power: Hitler vs. Trump, I wrote:

“Leftists recognize corporate America owns the two parties, yet many still vote Democrat. Every four years, we must first defeat the fascist, then build our movement. So is the story we are told. This has been an effective strategy to trap us in the Democratic Party. It has worked for generations. Not only does it reinforce our domination by corporate America, but it seriously miseducates people about fascism.

“Needless to say, so long as corporate America has the liberal-left tied to their two party system, they have no need for fascism. They need fascism only when their customary method of rule breaks down and they face a very direct threat of losing control to revolutionary forces. The historic function of fascism is to smash the radicalized working class and its allies, destroy their organizations, and shut down political liberties when the corporate rulers find themselves unable to govern through their charade of democracy.  No such problem here.”

This capitulation to the corporate Democrats, including by self-described leftist groups, was hard to imagine just earlier in 2020, with the massive Black Lives Matter protests and the anti-neoliberal Bernie Sanders movement.

While the vast majority of voters for both parties voted for their version of the “lesser evil,” the record election turnout for this charade was a great victory for corporate America irrespective of who won.

The Democratic Party, liberals and leftists claimed Trump was planning a coup, a fascist coup even, on January 6. We are supposed to be grateful this alleged fascist insurrection was put down. But to play along with this coup story, if it were successful, the result would ignite massive nationwide protests by anti-Trump voters. After Trump’s election in November 2016, there were large “Not My President” protests in over 20 cities and many universities around the country. In 2020 between 15-26 million are said to have mobilized in Black Lives Matter rallies. Between 3-5 million participated in the anti-Trump Women’s Marches in 2017. Trump and his supporters have also shown they can turn out their base not only in large rallies but in armed protests.

Murders by individuals in both camps have already occurred in Charlottesville, Portland and Kenosha. Both anti-Trump and pro-Trump protesters firmly believe they are the ones defending US democracy and freedom against their opponents, that their own candidate legitimately won the presidential election. Rightwing Trumpers fear socialists will take over the US, while the anti-Trump left fear fascists will.

Nationwide confrontations and mobilizations by these opposing forces following a successful Trump coup could seriously damage the overall political stability of the US system for some time. This would weaken the US empire’s ability to sell its “freedom and democracy” image and political leadership role abroad. It would undermine US capacity to assert its military and world cop ideological power around the world.

Consequently, the best result for the US empire would be for Trump to lose the election, his “coup” to fail, and he be banned from running for political office. The US rulers achieved almost all that agenda. US leftists, declared opponents of the empire, must ask themselves why this very agenda was also their own agenda.