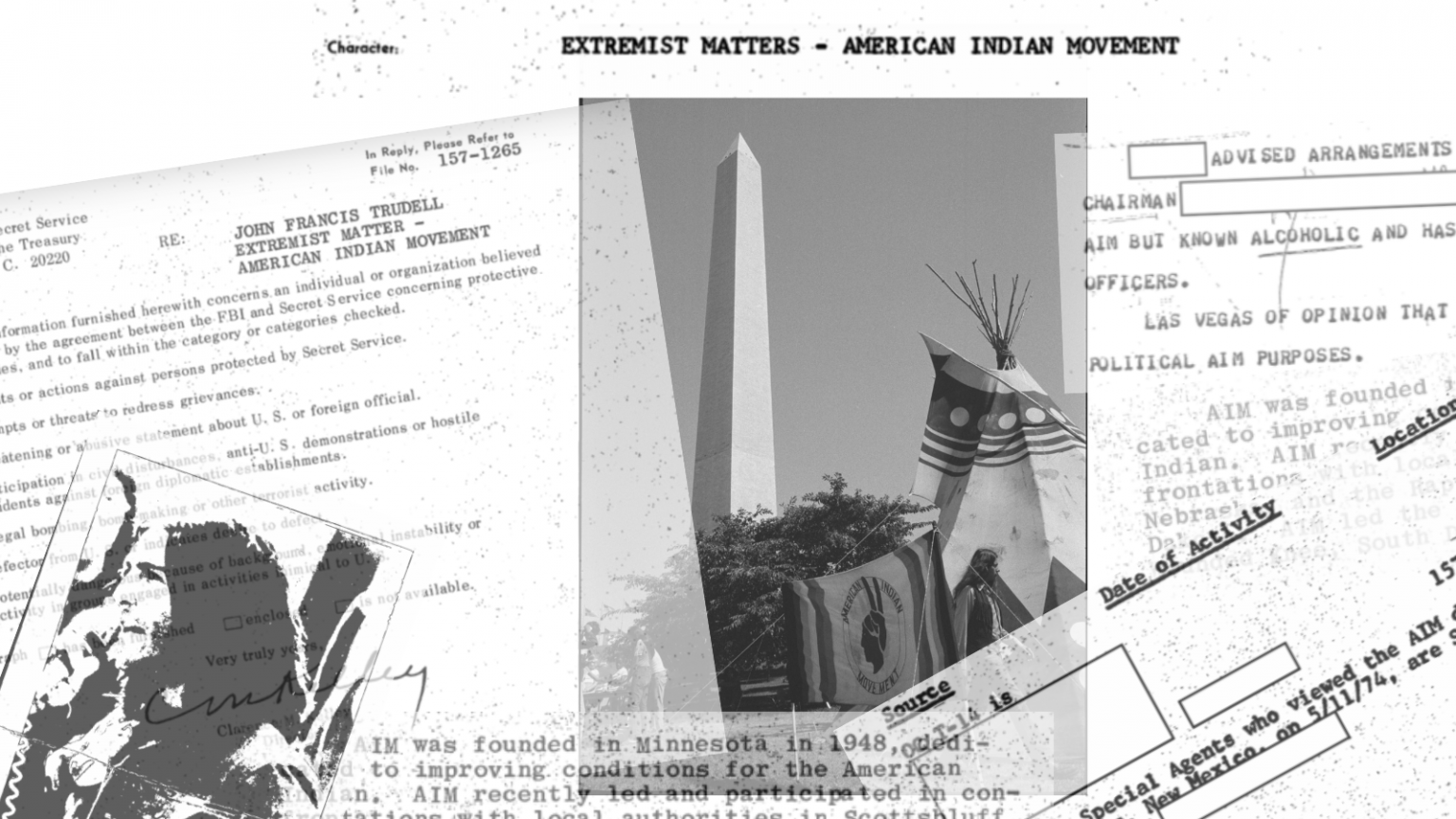 The FBI Is An Enemy Of Indigenous Liberation

Above Photo: On Indigenous Peoples’ Day, we remember how the FBI surveilled and repressed AIM and other indigenous liberation movements.

In 1969, American Indian Movement (AIM) activists occupied Alcatraz Island, invoking the Sioux Treaty of 1868, which grants unused federal lands to indigenous groups. Over the next several years, AIM also occupied the Mayflower. And Mount Rushmore. And the Bureau of Indian Affairs. And Wounded Knee. And other sites across the United States emblematic of the ongoing refusal of the American government to fulfill treaty obligations.

In the late 1960s and early 1970s, AIM became the vanguard of indigenous liberation. They fought back against police violence, illegal seizure of land, and the economic marginalization of indigenous people. Through direct action, formation of patrols documenting police abuses, and other confrontational tactics, AIM brought media attention to long-neglected issues relating to indigenous sovereignty and abuses at the hands of the state. Their activism emboldened less confrontational indigenous advocacy groups, including the National Congress of American Indians and the National Tribal Chairman’s Association, to become more emphatic in their demands. AIM awakened Americans to the realities of indigenous suffering in the United States and invigorated a nascent indigenous liberation mass protest movement.

Predictably, AIM also caught the attention of the FBI and law enforcement.

Law enforcement continually reacted disproportionately to AIM’s confrontational tactics, bringing the brunt of state power down upon activists. At the end of the Trail of Broken Treaties caravan, churches planning to host AIM activists in Washington DC revoked offers of housing. Reasoning that the Bureau of Indian Affairs should belong to indigenous people, AIM activists decided to occupy the building. As AIM leaders held a press conference outside, police in riot gear attacked the activists inside. What started as an impromptu occupation escalated to a siege. Trapped inside the building, AIM members dropped a banner rechristening the Bureau of Indian Affairs the “Native American Embassy.” They also liberated documents, which they would use to argue that the Bureau of Indian Affairs engaged in rampant fraud, theft, and abuse. The media attention this occupation received, combined with the severity of the law enforcement response, set the tone for future confrontations between authorities and AIM activists. Escalations between law enforcement and AIM continued. The Secret Service came to categorize AIM members as “potentially dangerous because of…activity in groups engaged in activities inimical to [the] US.”

Behind the scenes, emboldened by AIM’s militancy, the FBI conducted an elaborate surveillance campaign. Using confidential sources and secret agents, the FBI spied on AIM meetings, internal deliberations, and demonstrations. In addition to scrabbling for evidence of illegal behavior, FBI files include extensive notes about speeches relating to matters of policy and public concern. At one point, the FBI instructed its Los Angeles office to conduct a criminal background check on someone to determine whether they were a possible AIM sympathizer. The FBI further attempted to discredit AIM through affiliations with other militant groups and communist influences, going so far as to label the guns AIM members carried as “Communist automatic assault rifles.” FBI analysts tried to link AIM Press Secretary George Christopher Robers to Mexican-American militant groups and Symbionese Liberation Army (which kidnapped Patty Hearst) with little success.

In addition to surveilling AIM, the FBI also attempted to jail its members. In a publicity stunt, AIM activist John Trudell held up the Duck Valley Trading Post. Trudell shot a bullet into the wall behind the trading post clerk before demanding receipts from the till. Trudell tore up the receipts and demanded that the trading post lower prices within thirty days so that indigenous elders could afford food. Despite concluding that Trudell likely staged the stunt by intentionally tipping off members of the media, the FBI recommended that Trudell be charged with assault with a deadly weapon.

Infamously, the FBI targeted AIM leader Leonard Peltier Peltier was convicted in the death of two FBI agents during a shoot out on the Pine Ridge Reservation that also left an AIM member dead. The FBI had been engaged in a ruthless war on AIM, similar in intensity as its violent campaign against the Black Panthers. Four men were originally charged in the deaths of the two FBI agents (no one was ever charged over the death of the AIM member). One had all charges against him dropped due to lack of evidence. The other two, who were tried separately from Peltier, were acquitted when a jury found they had acted in self-defense.

The FBI, which long had Peltier in its sights, directed U.S. attorneys to pour resources into prosecuting Peltier. Peltier was convicted of the murders and sentenced to two consecutive life sentences, despite the intimidation of key witnesses (three of whom later retracted their testimony) and withholding of ballistic evidence failing to link the bullets fired to Peltier’s gun. Even one of the prosecutors who helped put Peltier behind bars later called for his release. Eventually, with many of its leaders in prison, AIM disbanded in 1978.

Unfortunately, surveillance of indigenous protesters lives on. During the Dakota Access Pipeline protests at Standing Rock, law enforcement contracted with a security firm to pilfer through activists’ social media and surveil protesters using drones. Predictably, the FBI defaulted to allegations of terrorism, sending Joint Terrorism Task Forces after Water Protectors. An FBI agent showed up in the hospital room of one protester as she was about to be wheeled into surgery and confiscated evidence needed in a lawsuit against police. Another protestor pleaded guilty to charges relating to the firing of a gun owned by an FBI informant infiltrating Standing Rock.

Law enforcement crackdowns and FBI surveillance of indigenous liberation movements are continuous constraints upon the power of organizers. It remains a black mark upon our history – and present.