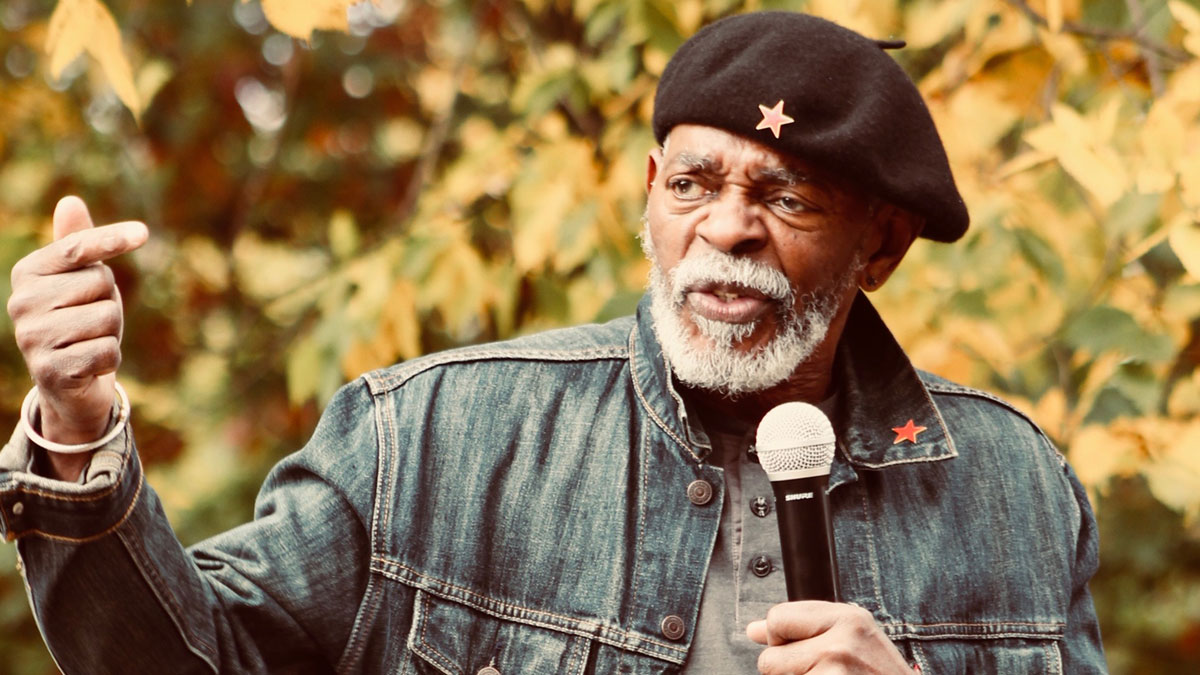 Put the colonial state on trial! We will win!

There are strong indications that in early 2023, I, Omali Yeshitela, Chairman of the African People’s Socialist Party (APSP), founder of the Uhuru (“Freedom”) Movement, will be indicted, along with other Uhuru leaders and members, by the federal government of the United States.

Using the bogus and slanderous charge that we are “Russian agents,” the U.S. government and its “Department of Justice” will attempt to put us on trial and imprison us for fighting for the liberation of African people in the U.S. and around the world.

But they will fail. We will win.

I am 81 years old. My political work for the last 60 years or so is influenced by the fact that in my entire life, nearing 100 years, I have not known a single day when my people were not experiencing oppression, exploitation and humiliation.  For most of my life, I have worked to build the movement for freedom for black people in the U.S. and around the world, most significantly beginning with my work as an organizer with the Student Nonviolent Coordinating Committee in the 1960s.

Since 1972 I have organized and led the African People’s Socialist Party and the Uhuru Movement, a worldwide organization fighting for the self-determination of African people everywhere. Our organizational presence extends to nearly every continent. We exist throughout the U.S., Europe, the U.K., Africa and the Caribbean.

Our Party presides over more than 50 institutions of economic development and self-reliance for the African community including numerous projects in north St. Louis, Missouri known as the Black Power Blueprint.

On July 29 of 2022, the FBI violently and militarily raided my home in north St. Louis, Missouri where I live with my wife, the Deputy Chair of the African People’s Socialist Party, Ona Zené Yeshitela, along with six other homes and offices of Uhuru Movement leaders.

Now the U.S. government is attempting to discredit our righteous struggle to free our people from the perpetual immiseration we face in this country stemming from America’s unresolved “original sin” of slavery and colonialism, a sin whose existence was given testimony by U.S. president Joseph Biden on December 15 of this year.

Their “case” against us is baseless and ridiculous. Our case against them is backed by an undeniable history of centuries of ongoing atrocities against our people and our movement by the U.S. government, who have often used the FBI and Department of Justice as their political weapons against us.

When they put us on trial, we will put them on trial.

The U.S. government must be made to explain this attack on us in light of the well-known history of COINTELPRO and other covert and overt acts of surveillance, harassment, imprisonment and/or assassination of leaders such as Martin Luther King, Jr., Marcus Garvey, W.E.B. DuBois, Paul Robeson, Fred Hampton and many others.

The U.S. is attempting to hide this blatant attack on black people by saying that it is an attack on Russia, not the African Liberation Movement.

How will they defend this absurd notion against the overwhelming evidence of the criminal colonial assaults by the FBI and Justice Department against African people historically, often using the specter of “the Russians” or “the Communists” as their legal cover?

This case is not about whether or not I went to Russia, or whether or not I have a position around the war in Ukraine that was the same as what the Russians had. This attack was perpetrated against us because we have always fought for the liberation of Africa and African people everywhere.

The legal statutes the U.S. will use to execute this political attack will include the so-called “Foreign Agents Registration Act (FARA),” which they also used in 1951 to construct their indictment of W.E.B. DuBois on nearly identical charges of working for “the Russians.”

This is selective prosecution. The American Israel Public Affairs Committee and other Israeli lobbying organizations are seemingly immune from prosecution under the FARA law despite their obvious public function as agents of the Israeli government. The “Foreign Agents Registration Act” is almost never enforced unless it is used as a tool against Africans and other colonized peoples.

We will raise up our supposed legal rights to freedom of speech, freedom of association and freedom of assembly, but more importantly, the government must be made to answer for their oppression and terror against black people historically.

Beginning in the 1970s, our Party laid out a strategic approach to winning the freedom for black people that included building relationships with people all around the world to support the struggle for African self-determination in the U.S.

At our First Party Congress held in Oakland, California in 1981, we received solidarity statements from organizations and governments from around the world, including FECOPES in Colombia, Casa El Salvador, the Pan African Congress of Azania (South Africa), the FSLN government from Nicaragua, the New Jewel Movement-led government of Grenada, Casa Chile, the Revolutionary Workers’ Party of Argentina, the Association of Vietnamese Patriots in the U.S., and the National United Movement of Barbados.

This helps to give lie to the notion that our connection to a Russian NGO is evidence of an illicit relationship that we would have with a “foreign” power.

I traveled to Ireland more than 40 years ago to meet with the Irish Republican Socialist Party (IRSP) at a time when the Irish people were engaged in a struggle for their independence from British colonialism.

In 1983 The Burning Spear newspaper published an article covering how we won the Irish Republican Socialist Party to support our demand for reparations. They held a press conference with us in Belfast, Northern Ireland. The IRSP came out and said that they didn’t want any monetary donations from any Irish people in America who were not supporting the liberation struggle of black people in the U.S.

Our Party has a half-century long historical trajectory that precedes anything that the U.S. government is talking about now in terms of Russia. I was in Nicaragua representing black people after the Nicaraguan Revolution, based on our relationship with the Sandinista National Liberation Front with whom we worked closely in San Francisco leading up to their victory in 1979.

In 1982 we held the first World Tribunal for Reparations for Black People in history. We indicted the U.S. government based on international law and the right of an oppressed people to wield our own state power.

One aspect of the international law used for the Reparations Tribunal was the question of the United Nations Convention on the Prevention and Punishment of the Crime of Genocide.

An international panel of judges ruled at the end of two days of testimony that the United States is guilty of genocide against African people. It took another 40 years for the United States to ratify this genocide convention, and only in a fashion that freed itself from any possible trial or repercussions.

The reason the U.S. wouldn’t ratify the Genocide Convention was because they wanted to evade responsibility for their treatment of the colonized African and Indigenous peoples in this country.

The U.S. government and the FBI’s attacks on the Uhuru Movement did not begin in 2022. It goes back decades.

In 1996 more than 300 militarily armed police attacked the Uhuru House in St. Petersburg, FL, with airplanes and helicopters. They pumped the entire reserve of tear gas in the city into the Uhuru House where a mass meeting was going on following the police murder of an 18-year-old African teen. This was the same Uhuru House they just invaded and raided again on July 29.

As I mentioned earlier, Biden himself, when he was trying to win the loyalty of people in Africa, had to confess the “original sin” of this country: the stolen labor of African people on the stolen land of the Indigenous people, the foundation on which the United States rests.

After the FBI raids on seven offices and homes of the Uhuru Movement in two cities in the pre-dawn hours of July 29, 2022, there was a tremendous amount of interest, support and outrage coming from literally millions of people and organizations throughout the U.S. and the world.

Numerous organizations and individuals including St. Louis Alderman from Ward 18, Jesse Todd, Zaki Baruti, President-General of the Universal Afrikan People’s Organization, New York councilpersons Charles and Inez Barron, Marsha Coleman-Adebayo, Nellie Bailey and others sent messages of support, all of which are cited on our website HandsOffUhuru.org.

But as indictments loom, now is the time to escalate the campaign to mobilize massive public support for the Uhuru Movement, the African People’s Socialist Party, its leaders and members and the right of African people everywhere to organize and advocate for our liberation.

Resources are urgently needed for our legal defense and campaign work. We are recruiting into our legal support team. We urge all supporters to sign the emergency response pledge form in preparation for political actions once the indictments come down: HandsOffUhuru.org/Emergency-Response

Our victory will be won in the streets. Join the movement. Put the colonial state on trial. Turn the tables. Win broad mass support from African people and other forces inside this country and around the world.

Join the Hands Off Uhuru! Hands Off Africa! Defense Campaign and get involved wherever you’re located. Build a committee. Donate. Hold a fundraiser. Be a part of making history and winning a landmark victory for the African Liberation Movement that will forever change the world.