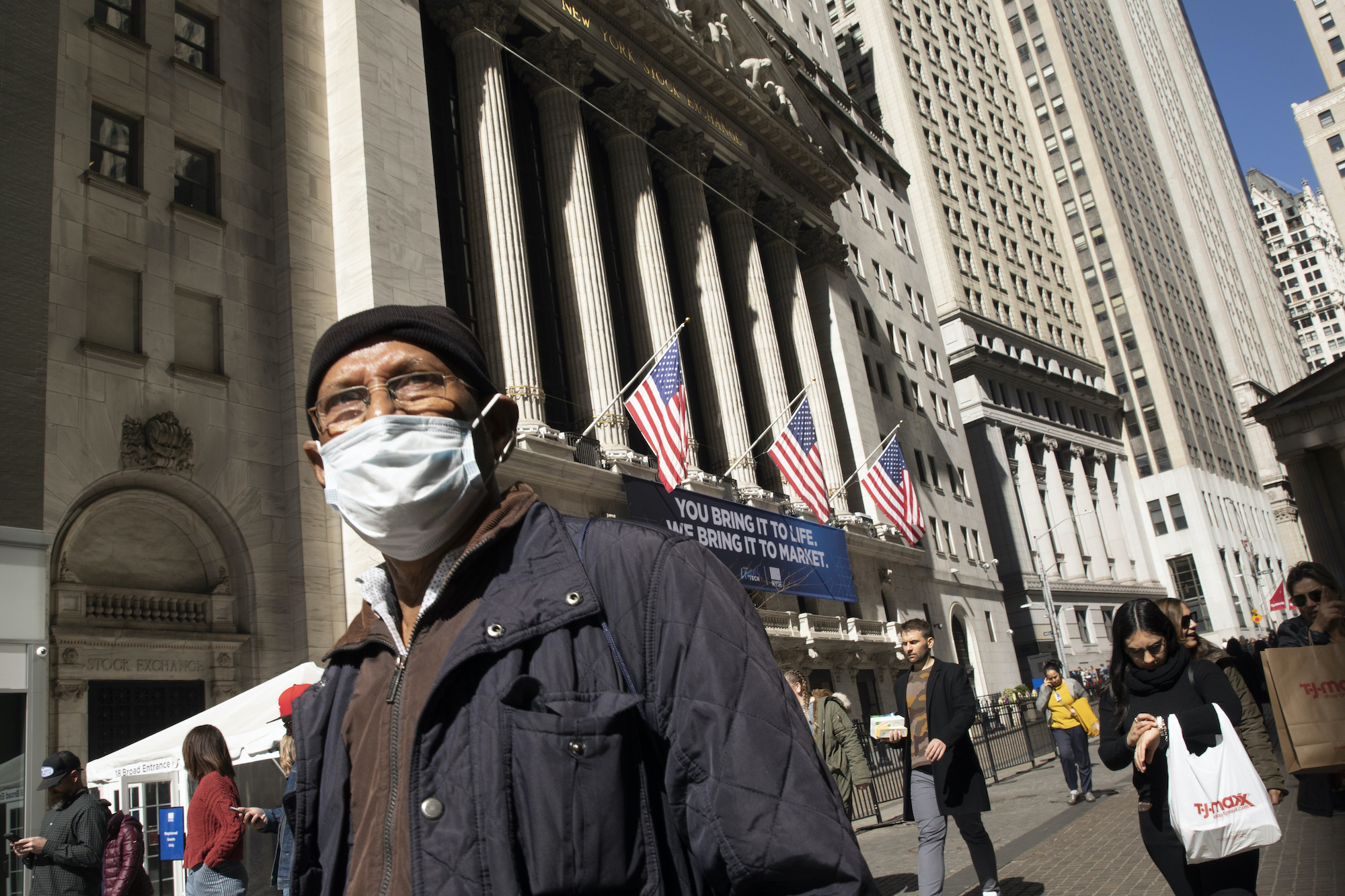 The Fed’s Baffling Response To The Coronavirus Explained

Above Photo: A man taking precautions amid the coronavirus outbreak walks past the New York Stock Exchange. (Mark Lennihan / AP)

When the World Health Organization announced on Feb. 24 that it was time to prepare for a global pandemic, the stock market plummeted. Over the following week, the Dow Jones Industrial Average dropped by more than 3,500 points, or 10%. In an attempt to contain the damage, the Federal Reserve on March 3 slashed the fed funds rate from 1.5% to 1.0%, in its first emergency rate move and biggest one-time cut since the 2008 financial crisis. But rather than reassuring investors, the move fueled another panic sell-off.

Exasperated commentators on CNBC wondered what the Fed was thinking. They said a half-point rate cut would not stop the spread of the coronavirus or fix the broken Chinese supply chains that are driving U.S. companies to the brink. A new report by corporate data analytics firm Dun & Bradstreet calculates that some 51,000 companies around the world have one or more direct suppliers in Wuhan, the epicenter of the virus. At least 5 million companies globally have one or more tier-two suppliers in the region, meaning that their suppliers get their supplies there; and 938 of the Fortune 1,000 companies have tier-one or tier-two suppliers there. Moreover, fully 80% of U.S. pharmaceuticals are made in China. A break in the supply chain can grind businesses to a halt.

So what was the Fed’s reasoning for lowering the fed funds rate? According to some financial analysts, the fire it was trying to put out was actually in the repo market, where the Fed has lost control despite its emergency measures of the last six months. Repo market transactions come to $1 trillion to $2.2 trillion per day and keep our modern-day financial system afloat. But to follow the developments there, we first need a recap of the repo action since 2008.

Repos and the Fed

Before the 2008 banking crisis, banks in need of liquidity borrowed excess reserves from each other in the fed funds market. But after 2008, banks were reluctant to lend in that unsecured market, because they did not trust their counterparts to have the money to pay up. Banks desperate for funds could borrow at the Fed’s discount window, but it carried a stigma. It signaled that the bank must be in distress, since other banks were not willing to lend to it at a reasonable rate. So banks turned instead to the private repo market, which is anonymous and is secured with collateral (Treasuries and other acceptable securities). Repo trades, although technically “sales and repurchases” of collateral, are in effect secured short-term loans, usually repayable the next day or in two weeks.

The risky element of these apparently secure trades is that the collateral itself may not be reliable, because it may be subject to more than one claim. For example, it may have been acquired in a swap with another party for securitized auto loans or other shaky assets — a swap that will have to be reversed at maturity. As I explained in an earlier article, the private repo market has been invaded by hedge funds, which are highly leveraged and risky; so risk-averse money market funds and other institutional lenders have been withdrawing from that market. When the normally low repo interest rate shot up to 10% in September, the Fed therefore felt compelled to step in. The action it took was to restart its former practice of injecting money short-term through its own repo agreements with its primary dealers, which then lent to banks and other players. On March 3, however, even that central bank facility was oversubscribed, with far more demand for loans than the subscription limit.

The Fed’s emergency rate cut was in response to that crisis. Lowering the fed funds rate by half a percentage point was supposed to relieve the pressure on the central bank’s repo facility by encouraging banks to lend to each other. But the rate cut had virtually no effect, and the central bank’s repo facility continued to be oversubscribed the next day and the following. As observed by Zero Hedge:

This continuing liquidity crunch is bizarre, as it means that not only did the rate cut not unlock additional funding, it actually made the problem worse, and now banks and dealers are telegraphing that they need not only more repo buffer but likely an expansion of QE [quantitative easing].

As financial analyst George Gammon explains, however, the crunch in the private repo market is not actually due to a shortage of liquidity. Banks still have $1.5 trillion in excess reserves in their accounts with the Fed, stockpiled after multiple rounds of quantitative easing. The problem is in the collateral, which lenders no longer trust. Lowering the fed funds rate did not relieve the pressure on the Fed’s repo facility for obvious reasons: Banks that are not willing to take the risk of lending to each other unsecured at 1.5% in the fed funds market are going to be even less willing to lend at 1%. They can earn that much just by leaving their excess reserves at the safe, secure Fed, drawing on the Interest on Excess Reserves it has been doling out ever since the 2008 crisis.

But surely the Fed knew that. So why lower the fed funds rate? Perhaps because it had to do something to maintain the façade of being in control, and lowering the interest rate was the most acceptable tool it had. The alternative would be another round of quantitative easing, but the Fed has so far denied entertaining that controversial alternative. Those protests aside, QE is probably next after the Fed’s orthodox tools fail, as the Zero Hedge author notes.

The central bank has become the only game in town, and its hammer keeps missing the nail. A recession caused by a massive disruption in supply chains cannot be fixed through central-bank monetary easing alone. Monetary policy is a tool designed to deal with demand — the amount of money competing for goods and services, driving prices up. To fix a supply-side problem, monetary policy needs to be combined with fiscal policy, which means Congress and the Fed need to work together. There are successful contemporary models for this, and the best are in China and Japan.

The Chinese Stock Market Has Held Its Ground

While U.S. markets were crashing, the Chinese stock market actually went up by 10% in February. How could that be? China is the country hardest hit by the disruptive COVID-19 virus, yet investors are evidently confident that it will prevail against the virus and market threats.

In 2008, China beat the global financial crisis by pouring massive amounts of money into infrastructure, and that is apparently the policy it is pursuing now. Five hundred billion dollars in infrastructure projects have already been proposed for 2020 — nearly as much as was invested in the country’s huge stimulus program after 2008. The newly injected money will go into the pockets of laborers and suppliers, who will spend it on consumer goods, prompting producers to produce more goods and services, increasing productivity and jobs.

How will all this stimulus be funded? In the past, China has simply borrowed from its own state-owned banks, which can create money as deposits on their books, as all depository banks do today (see here and here). Most of the loans will be repaid with the profits from the infrastructure they create, and those that are not can be written off or carried on the books or moved off the balance sheet. The Chinese government is the regulator of its banks, and rather than putting its insolvent banks and businesses into bankruptcy, its usual practice is to let nonperforming loans just pile up on bank balance sheets. The newly created money that was not repaid adds to the money supply, but no harm is done to the consumer economy, which actually needs regular injections of new money to fill the gap between debt and the money available to repay it. In all systems in which banks create the principal but not the interest due on loans, this gap continually widens, requiring continual infusions of new money to fill the breach (see my earlier article here). In the last 20 years, China’s money supply has increased by 2,000% without driving up the consumer price index, which has averaged around 2% during those two decades. Supply has gone up with demand, keeping prices stable.

China’s experiences are instructive, but borrowing from the government’s own banks cannot be done in the U.S., because our banks have not been nationalized and our central bank is considered to be independent of government control. The Fed cannot pour money directly into infrastructure but is limited to buying bonds from its primary dealers on the open market.

At least, that is the Fed’s argument, but the Federal Reserve Act allows it to make three-month infrastructure loans to states, and these could be rolled over for extended periods thereafter. The repo market itself consists of short-term loans continually rolled over. If hedge funds can borrow at 1.5% in the private repo market, which is now backstopped by the Fed, states should get those low rates as well.

Alternatively, Congress could amend the Federal Reserve Act to allow it to work with the central bank in funding infrastructure and other national projects, following the path successfully blazed by Japan. Under Japanese banking law, the central bank must cooperate closely with the Ministry of Finance in setting policy. Unlike in the U.S., Japan’s prime minister can negotiate with the head of its central bank to buy the government’s bonds, ensuring that the bonds will be turned into new money that will stimulate domestic economic growth; and if the bonds are continually rolled over, this debt need never be repaid.

The Bank of Japan has already “monetized” nearly 50% of the government’s debt in this way, and it has pulled off this feat without driving up consumer prices. In fact, Japan’s inflation rate remains stubbornly below the BOJ’s 2% target. Deflation continues to be a greater concern than inflation in Japan, despite unprecedented debt monetization by its central bank.

The Independent Federal Reserve Is Obsolete

In the face of a recession caused by massive supply-chain disruption, the U.S. central bank has shown itself to be impotent. Congress needs to take a lesson from Japan and modify U.S. banking law to allow it to work with the central bank in getting the wheels of production turning again. The next time the country’s largest banks become insolvent, rather than bailing banks out, Congress should nationalize them. The banks could then be used to fund infrastructure and other government projects to stimulate the economy, following China’s model.