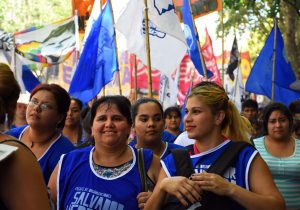 The Feminist Spring And The Patriarchal Counter-Offensive

One of the most relevant contemporary political events is the positioning of feminism as a transforming force of global scope, achieved both by its contributions to the mobilization of ideas to learn the reality and act on it, and by the political and strategic action that, as a central piece for all change, is deployed from multiple scenarios.

From Buenos Aires to Manila, from Cape Town to Sao Paulo, from Delhi to San Juan and in every corner of the planet, a multiplicity of structural situations and data delineate the variegated cartography of patriarchal power relations, while broad mobilizations, demands, and resistances reveal the historical character, therefore reversible, of that power.

These political and theoretical advances have shown that the transformation of women’s socioeconomic reality has a dialectic relationship with changes in the general structure of society. Thus, in a context in which the concentration of goods and resources is condensed and levels of geo-economic exclusion are multiplied, feminism places the capital-life contradiction as a category of analysis that is indispensable for explaining phenomena such as the tendency to exponentially discard women and others affected by structural inequalities. The capital-life contradiction becomes more acute as the reproduction of global capitalism aims at the commodification of life – of all spheres and all needs – while its expansion rests on the intensification of the exploitation of nature and people.

On the basis of the recognition of the sexual division of labor formulated in the 19th century and the value of domestic work conceptualized in the 20th, feminist economics has ventured into the formulation of alternative and systemic economic horizons, which aim at the sustainability of life, from an approach of economic diversity in which the capitalist market is the dominant power, but only that. This perspective appears in recent conceptualizations such as the economy for Good Living, which places the reproduction of life and not that of capital at the center of society’s projects. Similar proposals are outlined in other perspectives of alternative economies, such as the care economy, which “include various production, exchange and income-generating activities that are not governed by the logic of the capitalist market and which are associated with the satisfaction of basic needs for food, housing, clothing, and basic infrastructure. They involve knowledge, practices and technologies that are part of the cultural assets of various societies and communities”.

With creativity and with multiple questionings of the dominant discourses, their omissions and assumptions, feminism has revealed a heterogeneous, diverse and contradictory reality, which in turn appeals to renewed dialectic views on the future and history, which include dimensions previously considered specific, as is the case of sexuality and reproduction, now under debate in spheres of public policy and international regulation, as well as in the streets, in economic and political scenarios, in the media and others.

For its part, the patriarchy, mimicking the power reconfigurations of global capitalism, shows muscle and presents mechanisms readjusted to circumstances and times. The symbiosis between patriarchy and global capitalism is present in the dispute for the control of the world by transnational, financial, communicational and military powers; it is in the struggle for technological hegemony, which is peremptory for the exercise of power in surveillance capitalism; it is in the geo-economic issues and the ‘territorial reordering’ inherent in the control of ‘natural’ resources and land; as well as in the managerial designs for the management of societies ‘outside politics’, and others.

The transition from a multilateral world project, based on the existence of states, countries, and cultures, to one based on private corporate interests, with supranational, all-embracing and factual powers, is no less significant. Globalization, which crystallized in the last quarter of the 20th century, produced an important dispute of meanings, not only because of the resistance of peoples and cultures against homogenization, but also because its extraterritorial model, under the predominance of transnationals and financial capital, implied an intense violation of economic, social, and collective rights, among them labor rights, in order to reorganize production on a global scale, with forms such as labor delocalization, flexibilization or global production chains.

Women are in the majority of flexible and often unhealthy production chains, in key areas for the new moment of capitalism, for example, that of digital technologies, not to mention the well-known free zones or those of transnational agricultural production, to mention a few. Moreover, socio-economic margins have developed where women, together with powerless people, such as the undocumented and others, form geopolitics of survival on a global scale. Saskia Sassen characterizes the submerged, informal and even illegal economies as structural to the system so that labor prevarication not only coexists but also sustains high salaries, rights and dignified jobs for a few.

But we are also facing a transnational of patriarchal violence since at the same time as public and private male violence has intensified, the doctrines of control and practices of spoliation of personal data associated with surveillance capitalism have also been positioned, and worse still, the symbols and realities of war have entered into everyday life.

With the great waste of power exhibited by the Military-Industrial Complex -of the United States and its partners-, the restructuring of a political economy of violence is on the table, in addition to a renewed version of the international and sexual division of labor of destruction and war, which ranges from the inclusion of women as military or paramilitary to their enrolment in prostitution and other activities associated with entertainment, which militarization encourages. But there are also workers who, exposed to chemicals or in precarious conditions, leave their health in the manufacture of chips for drones or other weapons.

Paradoxically, in these unhealthy contexts, stereotypical ‘subcultures’ of femininity and consumption patterns are also reconstituted, with everlasting debts, while imitations of acquired ‘global’ brands have very short expiration dates and disappear. But these disappointments also happen to countries that get into debt to participate in the dynamics of security and defense of other hemispheres or of the world, while it is known that weapons are spent in the South to plunder the territories and resources of the indebted.

The Military-Industrial Complex, as a global factual power, exhibits a militarization ad infinitum approach, which commits capital directly linked to the profits of financial capitalism. In turn, through these dynamics, transnational corporations have the guarantee of being able to multiply -manu militari- their profits also to infinity.

In the transition towards patriarchal and capitalist globalism, with the symbolic and cultural production and the communicational scenarios under hegemonic control of the transnational corporations, operates both the re-edition of sexism in the codes and practices and the re-adaptation of the patriarchal and hierarchical vision of the social relations in all the scenarios.

By resorting to seduction, they seek to fill minds and hearts with the symbols of success associated with financial power, they hope to create an illusion with the allegories of undeniable progress that typify the image of the transnationals, and they even try to awaken a sense of the need for militarization, to safeguard private business interests with weapons and technologies, as if they were their own.

Along these lines, the trivialization of violence also stands out. The incessant display of anger, sexist reprimands, pugilism, shootings, repression, and war, leads to an imaginary of violence and subjugation. The growing culture of militarization and the militarization of culture have a decisive influence on the production of values and meanings.

A high-intensity feminism proposes, acts and disputes future horizons in Latin America and the Caribbean, where an unprecedented historical process of changes raised since the beginning of this century, put into perspective proposals for the common good, redistribution and rights, with scope in national and even regional scenarios and the South. Concomitantly, a multiplicity of slopes, currents and tendencies of the feminist movement managed to raise a significant mass mobilization, with demands ranging from the right to abortion and for a life without violence to the struggle for agrarian reform, against poverty or global warming.

But there is also its antithesis, the so-called ‘conservative restoration’, “…whose disciplinary responses leave no loose ends, rather, as part of a systemic pattern of control, they apply an all-encompassing strategy, with multiple and heterogeneous mechanisms, to establish the project of the world elites as immovable and to ensure that the factors of financial, military, mercantile, communicational, transnational and national power return to the absolute control of the destinies of the region, there are even certain temptations to become a spearhead of so-called global fascism. In this scenario, feminist proposals are under suspicion, rights and freedoms are frozen, and the feminist agenda must go on the defensive.

In this dispute of meanings and horizons, the interrelationship between the scenarios of change and the possibilities for the realization of feminist initiatives is irrefutable. In Bolivia, now under a neo-fascist dictatorship, the historical initiative of decolonization of the State -that is, the deconstruction of the macho structures of institutions and society-, undertaken by the government of Evo Morales, has been suspended. Not to mention the viability of various redistributive and equality-based economic initiatives.

For his part, President Bolsonaro intends to take Brazil back to remote times, replacing the feminist-inspired public policies put in place by the governments of Lula and Rousseff with those inspired by the Inquisition.

Likewise, with the return to neoliberalism, various economic policy priorities have been disappearing from the agenda in Ecuador, making visible the need to pay for care. Several issues corresponding to economic policy have been returned to the welfare heading, while budgets for action against male violence, among others, have been reduced to a minimum.

But power relations are also dialectic and from anti-victimization perspectives, women resist, as is the case in Chile and other countries.

Ways of managing life and wisdom other than the anti-ethics and anti-aesthetics of patriarchal capitalism are also evident. Among them stands out the historical enunciation of feminist socialism formulated by Hugo Chávez in 2006, with the correlative challenge of its construction in the middle of blockades and threats. Likewise, Cuba only surpasses itself with the deepening of cultural changes in society, towards a full and unprecedented equality for its senses of humanity.

Feminism has spread its call to place the sustainability of life at the center of a new project for society, free from patriarchal and capitalist powers, stripped of corporate neo-colonialism and the dictatorship of the market. It is a project for peace in the world and in daily life, which calls for the formation of a broad movement to change the world.

In the words of Magdalena León T.: “Geographic expansion goes hand in hand with the projection of the strategic scope of feminism: it is about transforming the world, promoting a radical change in the hegemonic system, leaving behind predatory capitalism, the patriarchal order and all forms of domination, exploitation and violence. An urgent transformation before which women are already at the forefront moved by a commitment to life that, in various ways but continuously, they have sustained throughout history. Building material conditions from a logic of care for life, fighting for equality and justice, are at the base of experiences that already make feminism a solution for a world in crisis.