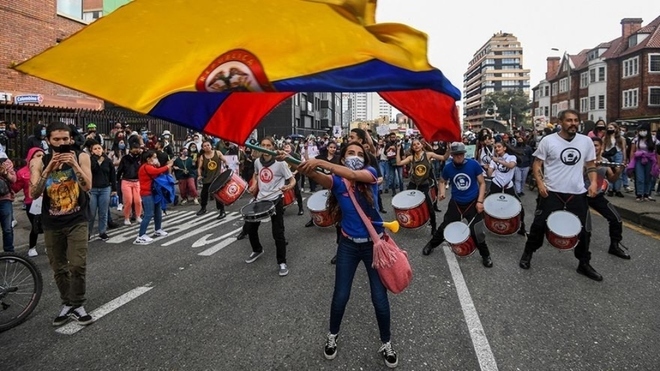 The Fight For A New Colombia

The latest round of protests against Colombia’s right-wing government have seen a brutal crackdown, leading to at least 43 deaths.

But the mass movement for social change is only growing stronger.

On 28 April, Colombian trade unions and social movements staged a new round of Paro Nacional (National Strike) protests, the latest in an ongoing series of mobilisations to address the litany of problems impacting Colombian society.

Opposition to a planned tax reform – which strike organisers said would unfairly target the middle and working classes in what is one of Latin America’s most unequal countries – was the central issue, particularly in the context of the global pandemic which has pushed an estimated five million Colombians out of work. Calls to repeal the tax reform were aligned with longer-running demands around growing poverty levels, addressing the human rights crisis affecting much of the country and properly advancing implementation of the 2016 peace agreement.

Since the National Strike movement was launched in November 2019, protesters have become accustomed to the police crackdowns of President Iván Duque’s right-wing administration. Yet even by recent standards, the spread and duration of the violence unleashed since 28 April has been extreme. For over three weeks of daily protests across Colombia, Colombian security forces – especially the notorious riot police unit, the Mobile Anti-Disturbance Squadron (ESMAD) – have committed massive human rights violations as Duque’s government seeks to suppress anger towards his government.

As befits the camera phone era, social media has told the story of Colombia’s social revolt. Thousands of images and videos have spread virtually, with several standing out for their exhibitions of social unity or poignant solidarity: mothers bearing improvised shields join youthful protesters on the frontline to face off against militarised police; statues of colonisers are toppled and replaced with likenesses of victims of state violence: music, art and dance energise crowds whose voices rise as one to demand a fairer Colombia.

While the official organisation of the National Strike movement comes from trade unions together with peasant, indigenous and other established social organisations, the protests have been characterised by the mobilisation of young Colombians from poor urban neighbourhoods. In cities across the country, most notably in Cali, this new generation of political protesters have become the so-called ‘front line’ resisting ever-increasing levels of police brutality.

Social media has also exposed the horrific violence inflicted on protesters by security forces. In one harrowing video, as four ESMAD agents drag her into a police station in Popayán, 17-year-old Alison Melendez shouts that they are removing her trousers. The next day, after reporting they had sexually assaulted her, she took her life. Footage filmed in the town of Madrid in Cundinamarca shows a tear gas canister fired at protesters from an armoured police vehicle. The projectile hit 24-year-old Brayan Niño in the face, killing him despite the efforts of those around him.

By 18 May Colombian human rights organisations had registered security forces apparent responsibility for more than 2,300 acts of violence, 43 killings (including four minors), 18 sexual assaults and 30 cases of eye injuries. Men in plain-clothes have been filmed firing at protesters as uniformed police officers stand alongside them and do nothing, particularly alarming given Colombia’s long history of state collusion with paramilitary terror.

There has been widespread international condemnation of the Colombian government’s response to the protests. The United Nations High Commissioner for Human Rights said it had witnessed the use of ‘excessive force’, while the US Embassy in Bogota called for ‘restraint’ from Colombian police to avoid ‘additional loss of life’.

55 Members of the US Congress signed a letter calling the human rights situation ‘out of control’, while British and Irish trade unions demanded justice for victims of police violence. The Inter-American Commission for Human Rights has requested permission from the Colombian government to investigate abuses. For its part, the British government, which has training programmes with the Colombian police, has not directly criticised the state violence.

Opposition to the planned tax reform comes at a time when more than five million people are estimated to have lost their main source of income due to the global pandemic and poverty levels increasing to over 40 per cent. Coronavirus has particularly impacted the many Colombians eking out a living in the large informal sector, which accounts for roughly half of the labour force in roles such as transport workers, domestic staff and street vendors.

National lockdowns, coupled with an absence of state support, pushed many Colombians into even deeper conditions of precarity. Although Duque repealed the tax reform after five days of intense unrest, it was far too late. His government had spilled too much blood.

In the midst of the killings and brutal violence being carried out by state agents, and far from calling for the abuses to come to an end, government officials issued repeated stigmatising statements against the protesters. On 3 May, defence minister Diego Molano said ‘Colombia faces the terrorist threat of criminal organisations,’ while Vice-President Martha Ramírez implied that indigenous organisations were funded by illegal drug money.

The use of smears to delegitimise popular movements is by no means a new tactic – trade unionists and activists have long been labelled as ‘guerrillas’ or ‘terrorists’. During the recent weeks, however, and in the context of a peace agreement now signed with the country’s largest and oldest guerrilla organisation, the attempts to stigmatise appear to have largely strengthened the resolve of the protesters.

Anger over economic injustice sits alongside major concern for human rights and peace. The 2016 peace agreement brought the curtain down on decades of armed conflict between the Colombian state and the FARC. The peace process has seen important advances, such as the FARC’s reformation as a political party and the development of an internationally acclaimed transitional justice system which has begun investigating crimes committed during the conflict.

In one of its most significant findings so far, it found that between 2002 and 2008 – during the government of former president Alvaro Uribe – the Colombian military murdered 6,402 civilians and falsely presented them as guerrillas killed in combat.

Since its inception, however, the Colombian right has made efforts to undermine the peace process. Indeed, Uribe, who continues to wield significant political power and whose support for Duque was fundamental to his successful presidential campaign, has been the lead voice in that opposition.

Duque’s electoral campaign was based on antagonism to the peace agreement and a promise to make fundamental changes. Since 2018, when Duque was elected, Colombia has depended on a political movement hostile to the peace process. The protests have given voice to a major rejection of the ongoing influence of uribismo in Colombian politics and its attacks on human rights and peace.

Furthermore, since the agreement was signed, more than 1,000 social activists and community leaders have been murdered across Colombia, with violence concentrated in regions historically impacted by conflict, structural poverty and state abandonment. The FARC’s agreed withdrawal created power vacuums in areas the state has failed to secure. Paramilitaries and other illegal armed groups now vie to exert control over territories or illicit economies, targeting local leaders and displacing entire communities.

Additionally, more than 270 FARC former combatants have been murdered since putting down their weapons. The UN Verification Mission in Colombia warns that violence towards social activists and FARC former combatants is the main threat to the peace process. The Duque government, however, has sought to downplay the human rights crisis and denies that killings reflect a systematic targeting of specific groups.

With elections scheduled in 2022, the protests could prove pivotal in determining who takes the presidency. The pro-peace movement enters electoral campaigning in a position of strength but whether it will be able to successfully coalesce around a single candidate could prove decisive. Left candidate and 2018 runner-up Gustavo Petro currently leads the polls and his supporters will be confident that the intensity of the protests reflects a widespread desire to fundamentally reshape Colombia’s social, political and economic model.

The multitude of factors underpinning popular discontent in Colombia has now exploded to the fore. In meetings on 10 and 16 May with government officials, the National Strike Committee presented demands to resolve the crisis, including an immediate end to the violence. Human rights organisations have called for drastic police reform, which involves removing police jurisdiction from the Ministry of Defence and disbanding the ESMAD. However, with the Duque government still committing flagrant human rights abuses, there is little indication resolution is close. The Colombian people have shown they do not plan to back down any time soon.

Hasan Dodwell is the director of Justice for Colombia.

Nick MacWilliam is the trades union and programmes officer at Justice for Colombia.