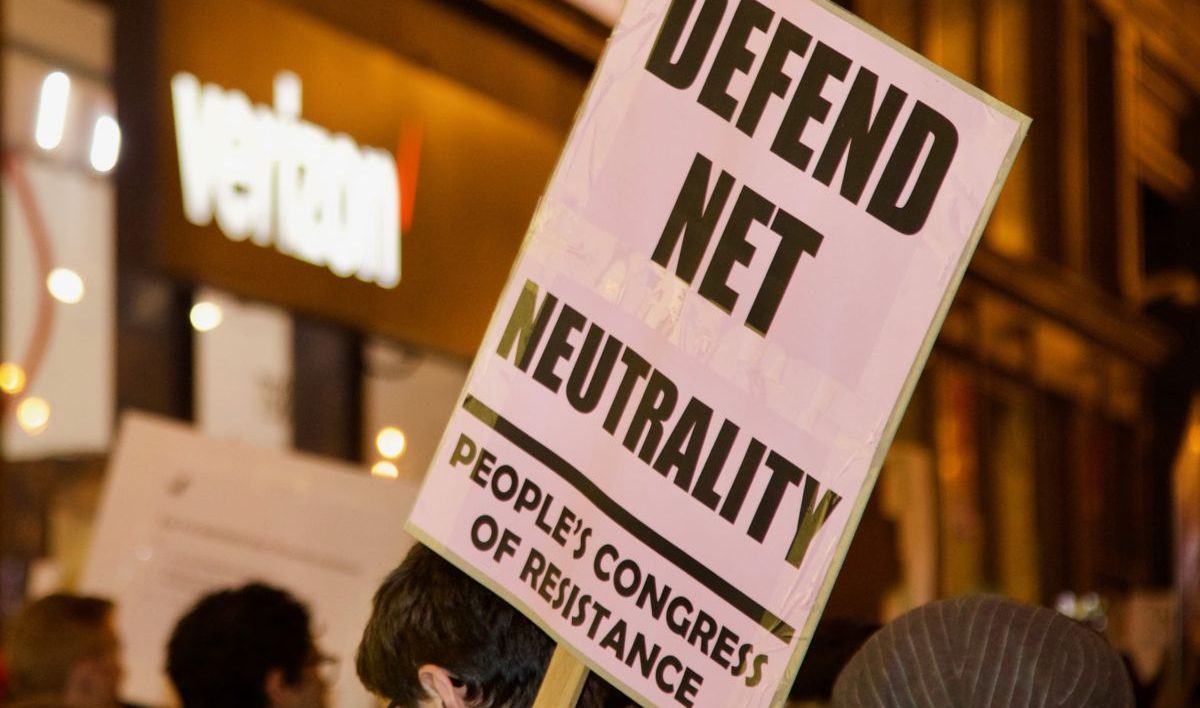 Above Photo: People gather to rally in favor of net neutrality in San Francisco, California, on December 7, 2017.CHARLES MOEHLE / FLICKR

The fight to restore net neutrality is heating up in the wake of the midterm elections.

Every Democrat in the House of Representatives who supports reversing the Trump administration’s decision to repeal popular net neutrality rules has held on to their seat. House Democrats also secured a majority in the lower chamber, setting the stage for a potential showdown between Congress, the White House and the Republican-controlled Federal Communications Commission (FCC) over how the government should regulate powerful internet service providers (ISPs) like AT&T, Cox and Comcast.

Democratic state attorneys general, who have been united in challenging the Trump administration’s effort to end net neutrality in federal court, now hold a majority of state seats nationwide. Democrats flipped four attorney general seats in the midterms, including in Colorado, where longtime net neutrality proponent Phil Weiser defeated Republican George Brauchler after campaigning on the issue. Weiser said Colorado would join 22 other states in a lawsuit filed against the FCC earlier this year to block the net neutrality repeal. Oral arguments will be heard in February.

“The FCC’s action — undermining 14 years of protecting an open Internet — is arbitrary, capricious, and cannot be justified on a reasoned basis,” Weiser told Truthout in an email. “I look forward to joining with other state attorneys general to fighting for an open Internet, leveraging my expertise in this area and my long history of support for net neutrality, including working with President Obama on this important issue.”

Then there is Republican Rep. Marsha Blackburn of Tennessee, a regular thorn in the side of progressive tech policy groups, who is jumping from House of Representatives to the Senate after defeating Democrat Phil Bredesden in a bitter battle over retiring Republican Sen. Bob Corker’s seat. Blackburn was the top recipient of telecom campaign funding in the House, and AT&T was a top contributor to her latest campaign.

Blackburn has a history of siding with the industry at the expense of consumers. In December 2017, she introduced net neutrality legislation in the House that digital rights advocates say is a giveaway to AT&T and other big ISPs. With the GOP maintaining control of the Senate, Blackburn may be in a position to push her industry-friendly proposals in the next Congress, particularly if she lands on the right committee.

Net neutrality is the principle that ISPs should not block users from accessing legal content, or favor loading speeds for some apps and websites over others in order to extract lucrative fees and stifle competition. The FCC established strong net neutrality protections under the Obama administration. In response, internet service providers went on the offensive, lobbying lawmakers and launching a legal challenge, which finally faltered last week after the Supreme Court refused to hear an appeal to a lower court ruling upholding the protections. However, the industry has found a friend in President Trump, who installed an anti-regulation commissioner, Ajit Pai, at the helm of the FCC in 2017. Pai moved quickly to pass a repeal, which went into effect in June 2018.

“Net neutrality was definitely talked about more in this campaign than any other campaign before.”

Net neutrality is popular among voters of all political stripes when they understand how it works. Voters also tend to have little trust in ISPs, which suffer from chronically low rates of consumer satisfaction. This has not been lost on some Democrats, who became net neutrality champions under Trump. Earlier this year, Senate Democrats found just enough GOP votes to pass a resolution that would undo the FCC’s repeal, but Republicans blocked the effort in the House. Of the 176 current House Democrats who backed the resolution, 160 will be returning next year under a Democratic majority, according to analysis by the digital rights group Free Press. The other 16 are either retiring or ran for a different office.

A recent Morning Consult poll found nearly 60 percent of Democratic voters said a candidate’s position on net neutrality was an important factor as they went to the polls this week, even though the issue was not central to many Democratic campaigns. Free Press CEO Craig Aaron said that while many issues shaped the election results, it’s clear that politicians who listen to the demands of internet users did well in the midterms. Once considered a wonky tech concern, net neutrality has become a grassroots phenomenon. Aaron said net neutrality and has also enjoyed a “pop culture breakthrough” via celebrity endorsements and coverage on late night TV, and some Democrats did use the issue to attack Republican opponents.

“Net neutrality was definitely talked about more in this campaign than any other campaign before,” Aaron said in an interview with Truthout. “We went from nothing in years past to all these candidates having very clear positions.”

Under the Congressional Review Act (CRA), Congress faces a deadline in a few weeks to vote on the resolution to reverse the FCC net neutrality repeal, which means the incoming Democratic majority won’t have a chance to restore net neutrality with that legislative method. Nonetheless, activists are making one final push for a CRA reversal before the House adjourns in December. In the unlikely event that Democrats attract enough Republicans to force a floor vote and pass the resolution to reverse Pai’s repeal, Trump would likely veto it. Still, this would generate plenty of political tension and thrust net neutrality back into the headlines.

“Even if we can’t get all 218 votes we’d need to pass it, the CRA is the most powerful tool we have to get more members of Congress — both Republicans and Democrats — on the record in support of strong net neutrality rules, which will be essential for any future fight on the issue,” wrote Evan Greer, an organizer with the pro-net neutrality group Fight for the Future, in a blog post this week.

House Democrats could use their majority to pass federal net neutrality regulations next year, but Republicans will still control 51 seats in the Senate. For most Republicans, net neutrality can be a thorny issue. Support for net neutrality bucks the anti-regulation agenda that unites the White House with the rest of the GOP, but opposing it can easily be painted as selling out consumers to a powerful industry that operates in an uncompetitive market.

“Democrats think it’s an issue they can win on, and it’s bad enough for Republicans that they all pretend now that they are for net neutrality,” Aaron said.

This explains why two Republican senators, Lisa Murkowski of Alaska and John Kennedy of Louisiana, sided with Democrats and voted for the CRA resolution to undo Pai’s repeal. Both senators will be returning to the Senate next year. Greer worries that cable and telecom lobby will use regulatory “vacuum” created by Pai’s repeal to advance “compromise” legislation that would actually undermine net neutrality permanently, much like Blackburn’s bill in the House. However, Aaron said the public would not be easily fooled.

“The opportunity for or five years ago to put something out that is called net neutrality but is not really net neutrality…it’s not the same, it’s a lot harder to sneak something through on this then it was in 2010 or 2014,” Aaron said.

Aaron is not expecting a divided Congress to pass many bills next year, but he said there are plenty of opportunities for net neutrality advocates in the House. Democrats will gain the power to investigate the Republican-led FCC and “make life a lot harder” for decision makers like Pai by calling them to testify before congressional committees.

“We are going to push the House to pass actual good legislation, even if it runs into a wall into the Senate, to be clear about what are the big policies, and what are the things that need to be done,” Aaron said.