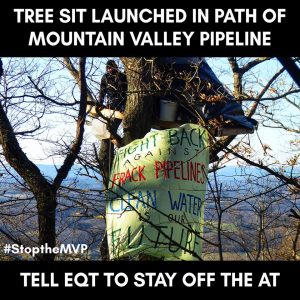 This week, Bursts spoke with Birch and Judy, two folks involved in the Tree Sits on Peter Mountain along the Appalachian Trail on the border of Virginia and West Virginia.  The tree sits are operating in order to block the Mountain Valley Pipeline or MVP.  Before all of the permits have been ok’d, contractors with the help of local law enforcement have been clearing the path for the pipeline.  This preparation would include 3,800 feet blasted through the mountains or if that didn’t work the blasting of a trench that length through the mountains.  We also talk about the ACP, or Atlantic Coast Pipeline, in this conversation and the connections between the two projects and their resistance.

These constructions (or destruction) and the resultant pipelines threaten the plants, animals (human and non) and all of the water systems along the route as well as continuing to foster an energy system that feeds off of the unsustainable extraction, transport and burning of fossil fuels to the short term benefit of a few government officials and capitalists and to the detriment of the entire world via anthropogenic, or human initiated, climate change.

You can donate to support at their youcaring site

For more information on the the Peters Mountain tree sit, the campaign against the MVP and how to join in or support where you are, check out the fedbook page Appalachians Against Pipelines.  To keep up on resistance to the ACP, you can follow the twitter account, NoACP.  And to learn more about anti-pipeline struggles in Virginia, in particular, check out the podcast, “End Of The Line“.  We interviewed a producer of this project in an earlier episode.