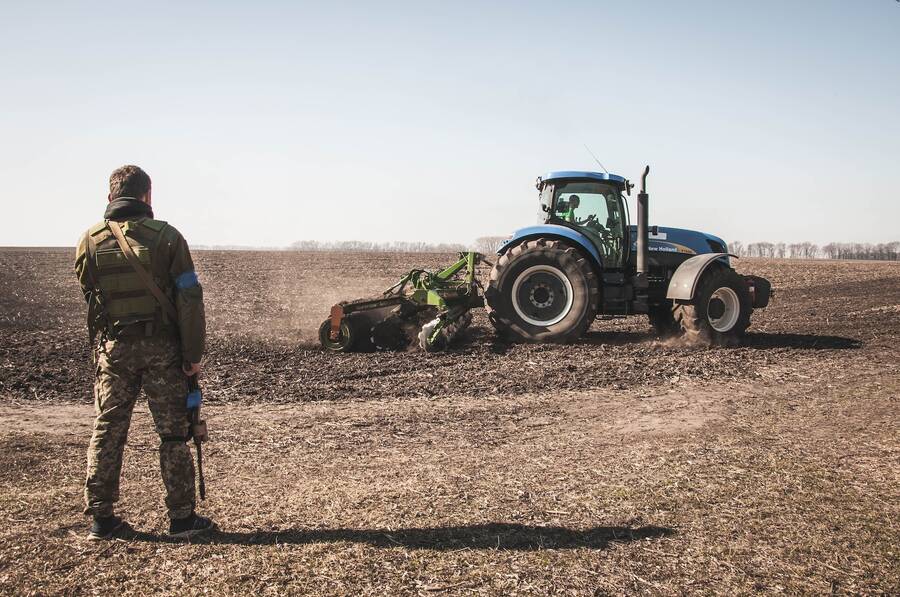 The Food Crisis Didn’t Begin With The War In Ukraine

Above Photo: A Ukrainian soldier watches a tractor plow a field in March near Kyiv, Ukraine. Because of the war, Ukrainian agriculture officials expect far fewer hectares of crops to be planted this year. Shutterstock.

Even As The Failures Of Industrial Agriculture Become Obvious, U.S. Agribusiness Aims To Force It On The Rest Of The World.

Even before the war in Ukraine, farmers across the U.S. were getting ready for higher prices on seed, fertilizer and crop chemicals. All winter, major farm media was warning farmers to book supplies early as prices would be high and supplies would be short.

The war has only amped up the concern among farmers and input suppliers. Like the oil companies that cited the sanctions on Russian oil to justify steep price increases (even though Russian oil continues to flow almost without interruption), corporate agribusiness has used the war as a justification to ramp up fertilizer, seed and chemical prices even further, leading Secretary of Agriculture Tom Vilsack to ask the Justice Department to investigate whether “every penny of these increases” is warranted. Meanwhile, the farm media offers suggestions for how farmers, despite relatively higher crop prices, might deal with the increase in input costs: Use less, get your old tillage equipment out or, heaven forbid, consider manually pulling weeds like farmers used to do (of course, years ago, farmers didn’t run thousands of acres).

Ukrainian farmers, meanwhile, continue to plant but have shifted their production to feed Ukrainians locally. But whether they’re in Ukraine or caught in one of the many other wars raging around the world, farmers cannot farm if they are under fire, so Ukrainian agriculture officials expect many fewer hectares to be planted in 2022 than in years past. Add to that the Russian blockades of Black Sea terminals tying up Ukrainian grain and fertilizer exports, the severe droughts and flooding impacting farmers around the world, and aftereffects of the pandemic supply-chain disruptions, and you can begin to make out what the coming year has in store: Food prices will continue to climb as the consolidated global agricultural system runs up against problems it cannot deal with. UN Secretary-General António Guterres likened the current crisis to “a sword of Damocles” hanging over the global economy — “especially in the developing world.”

However, the problems with this system didn’t begin with the war in Ukraine or with Covid-19. While this system works quite well for the multi-nationals that rake in profits selling the inputs to farmers and buying, processing and distributing the crops and livestock, for the farmers themselves—not so much. They are forced to buy at retail price and sell at wholesale price, all while competing against each other in a rigged marketplace. Here in the U.S., farmers are told they can and must feed the world by growing more corn, more soy and more livestock in confinement, even if that is not what the world wants or can afford to eat.

And this system doesn’t only hurt farmers. As industrial agriculture requires ever larger and more expensive equipment and larger farms, it has contributed to the depopulation of rural America and the destruction of rural communities and local food systems. It also causes a litany of environmental harms, from the destruction of fragile ecosystems being plowed up and put into production to the emergence of herbicide-resistant “super weeds” to unrestrained water use and pollution to the ravages of climate change, which is driven in large part by the food system itself.

Still, ignoring its obvious failures, boosters of this industrial food system tout it as the only way forward — not only for the U.S. but for the world. In the global south the situation is ever more dire and more unfair. Farmers are pressured by governments, the World Bank and philanthropists like Bill Gates to follow the industrial model of the U.S., never mind its failures, never mind its cost.

Take, for example, the Alliance for a Green Revolution in Africa (AGRA), an initiative launched in 2006 that aimed to double agricultural yields, halve hunger and increase farmer income in 13 African countries through deployment of industrial ag technologies such as commercial seeds, synthetic fertilizers and pesticides. Despite a billion dollars in support, most of it donated by the Bill & Melinda Gates Foundation, AGRA has proven to be a failure. A 2020 study found that staple crop yields did not increase, while the number of people going hungry increased by 30%. Africa does not have better access to food, the farmers are poorer and are being driven off their land, victims of technology, of input costs they cannot afford and of land grabs by foreign governments and corporations. Perhaps if African countries were not at the mercy of international lending institutions and their farmers the victims of climate change and agri-colonialism, they might feed themselves?

Insanity, they say, is doing the same thing over and over again and expecting different results. We have a high-tech industrial food system that is in crisis and has, over and over, shown its flaws — and yet we carry on in denial. Worse, we try to push the same failing systems on Africa and countries across the Global South, ignoring the fact that efforts like AGRA have failed and refusing to support agroecological solutions that will work.

Crisis should drive efforts for change. Why do we insist on more of the same?