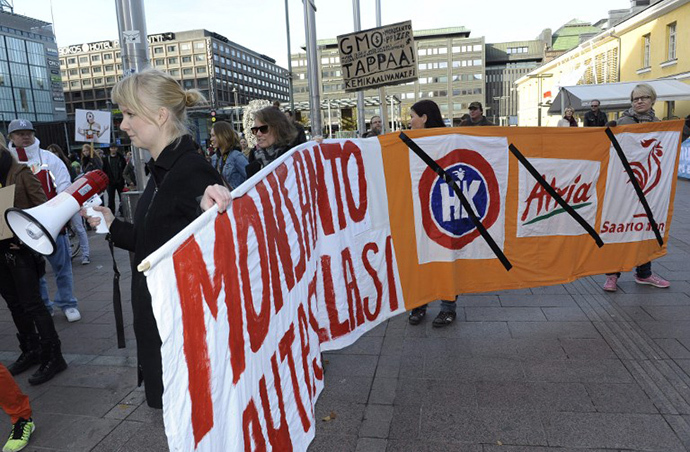 Above: Demonstrators hold up banners to protest against chemical giant Monsanto and its GMO (genetically modified organism) products on October 12, 2013 in Helsinki. Environmental activists around the World called for a “March Against Monsanto” to protest against the monopoly of the genetic engineering industry.      AFP PHOTO / LEHTIKUVA / HEIKKI SAUKKOMAA / FINLAND OUT

Across the country, consumers are demanding the right to know what is in their food, and labeling of genetically engineered food.

There is no scientific consensus about the risks of eating genetically engineered food, according to a statement last year signed by nearly 300 scientists. The scientists agree that “Concerns about risks are well-founded” and that a “substantial number” of “animal feeding studies and reviews of such studies…found toxic effects and signs of toxicity” in animals fed genetically engineered food, compared with controls. “Some of the studies give serious cause for concern,” the scientists write.

For example, a review of nineteen studies on mammals, published in Environmental Sciences Europe, found that the “data appear to indicate liver and kidney problems” arising from diets of genetically engineered food.

These questions of risks and safety have festered for years because the big agrichemical companies use their intellectual property rights to deny independent scientists the ability to test genetically engineered crops, or to report their results.Scientific American called these restrictions on free inquiry “dangerous.” “In a number of cases,” the magazine reports, “experiments that had the implicit go-ahead from the seed company were later blocked from publication because the results were not flattering.”

When scientists do publish studies adverse to the interests of the big agrichemical companies, they are met with vicious attacks on their credibility, their science and even in their personal lives.

Sixty-four nations have already required labeling of genetically engineered food, including the members of the European Union, Australia, Brazil, Turkey, South Africa, even Russia and China.

The food industry is feeling the pressure. Paul Bulcke, CEO of Nestle, the world’s largest food and beverage company, said that: “It is not business as usual anymore. Pressure is mounting from all sides and angles.”

Despite the overwhelming popularity of labeling, Congress refused to act, so citizens took up the cause in their own states.

Under heavy corporate lobbying and deceptive TV ads, ballot initiatives for labeling of genetically engineered food were narrowly defeated by 51 percent-49 percent in both California and Washington State. In May, legislation in the California Senate led 19-16, but failed without the 21 vote majority needed for passage.

Finally, on May 8, in a major victory, Vermont approved the first unconditional statewide labeling law for genetically engineered food. “Vermonters take our food and how it is produced seriously, and we believe we have a right to know what’s in the food we buy,” said Gov. Peter Shumlin.

Since then, the food and agrichemical industries have escalated to a full panic.

On June 13, the Grocery Manufacturers Association and three other trade associations — the heart of the junk food industry — filed a lawsuit in federal court to block the new Vermont labeling law. The good news is that people are rushing to Vermont’s defense, including Ben & Jerry’s ice cream, which will re-name one of its flavors “Food Fight! Fudge Brownie” to help fund a vigorous legal defense of Vermont’s new labeling law.

Elsewhere, industry is spending lavishly against the food movement. In New York State, the Daily News reported that: “Trade organizations, farm groups and corporate giants such as Coca-Cola and Kraft have spent millions of dollars on lobbyists and campaign contributions to defeat” labeling of genetically engineered food.

The food industry is quick to scare consumers with the canard that labeling of genetically engineered food will raise food prices. But manufacturers change their labels often, so their claim doesn’t make sense. It has been debunked in an study by Joanna Shepherd Bailey, a professor at Emory University School of Law, who found that “consumers will likely see no increases in prices” as a result of labeling genetically engineered food.

In Congress, U.S. Rep Mike Pompeo (R-KS) introduced a bill at the behest of the Grocery Manufacturers Association — dubbed by its consumer opponents “the Deny Americans the Right-to-Know (DARK) Act” — to block any federal or state action for labeling of genetically engineered food. Sometimes, politics is drearily predictable: Can you guess Rep. Pompeo’s largest campaign contributor? You got it: Koch Industries.

But the shame is fully bipartisan: sleazy Democratic lobbyists like former US Senator Blanche Lincoln and Steve Elmendorf are plying their trade for Monsanto and the Grocery Manufacturers Association to keep you from knowing what’s in your food.

Meanwhile, the food disclosure movement is going full speed ahead with ballot initiatives for GMO labeling in Oregon and Colorado, as well as legislative efforts in many other states.

There’s a great lesson in all this: when left and right join together, they can defeat big corporations and their subservient politicians. That’s the theme of my new book, Unstoppable: The Emerging Left-Right Alliance to Dismantle the Corporate State.

Food labeling is hardly a radical idea. Conservative economists are quick to point out that the free exchange of information about products is crucial to the proper functioning of a free market.

Even Monsanto supported labeling of genetically engineered food in Britain. But it spends millions to oppose labeling here in America. Such is corporate patriotism in the 21st Century: St. Louis-based Monsanto believes the British deserve more consumer rights than Americans do.

There are other reasons to be concerned about genetically engineered crops.

Genetically engineered crops have led to increased use of pesticides. For example, a study by Professor Chuck Benbrook of Washington State University found that between 1996 and 2011, genetically engineered crops have brought an increased use of more than 400 million pounds of pesticides. Mutating weed resistance is requiring the Monsantos to sell even more powerful herbicides. More details on these backfiring GMO crop technologies are contained in the new book titled The GMO Deception edited by Professor Sheldon Krimsky and Jeremy Gruber.

Perhaps most alarming is the corporate control of agriculture in the hands of the world’s largest agrichemical companies — Monsanto, DuPont, Syngenta, Dow, Bayer and BASF. “The Big 6 chemical and seed companies are working diligently to monopolize the food system at the expense of consumers, farmers and smaller seed companies,” said Philip H. Howard, an associate professor at Michigan State University.

These companies may be meeting their match in the mothers and grandmothers who have powered the movement for labeling of genetically engineered food. Like Pamm Larry, the pioneering grandmother who came up with the spreading idea reflected by the California ballot initiative for labeling.

Mothers know that food is love. Certainly, my mother did. She taught me early and often about how important it is to eat healthy food. She even wrote about these values in the book, It Happened in the Kitchen.

I’d like to think that she’d feel right at home with the mothers and grandmothers of today’s food movement. I sure do. In some ways, that’s the point: a movement that makes you feel at home, no wonder it is so popular.