By Ramzy Baroud, Mintpressnews.com
December 27, 2019
| Resist!
The Freedom Flotilla Will Make Its 35th Attempt To Sail To Gaza In 20202019-12-272019-12-27https://popularresistance-uploads.s3.amazonaws.com/uploads/2017/12/popres-shorter.pngPopularResistance.Orghttps://popularresistance-uploads.s3.amazonaws.com/uploads/2019/12/djrldroxcaatasq_edited.jpg200px200px

The solidarity mission is scheduled for the summer of 2020, and, like most of the 35 previous attempts, the Flotilla is likely to be intercepted by the Israeli navy.

What is Gaza to us but an Israeli missile, a rudimentary rocket, a demolished home, an injured child being whisked away by his peers under a hail of bullets? On a daily basis, Gaza is conveyed to us as a bloody image or a dramatic video, none of which can truly capture the everyday reality of the Strip – its formidable steadfastness, the everyday acts of resistance, and the type of suffering that can never be really understood through a customary glance at a social media post.

At long last, the chief prosecutor of the International Court of Justice (ICC), Fatou Bensouda, has declared her ‘satisfaction’ that “war crimes have been – or are being –  committed in the West Bank, including East Jerusalem, and the Gaza Strip.” As soon as the ICC statement was made on December 20, pro-Palestinian groups felt a rare moment of relief. Finally, Israel will stand accused, potentially paying for its recurring bloodbath in the isolated and besieged Gaza Strip, its military occupation and apartheid in the West Bank, and much more.

However, it could take years for the ICC to initiate its legal proceedings and render its verdict. Moreover, there are no political guarantees that an ICC decision indicting Israel would ever be respected, let alone implemented.

Meanwhile, the siege on Gaza persists, only to be interrupted by a massive war, like the one of 2014, or a less destructive one, similar to the latest Israeli onslaught in November. And with every war, more dismal statistics are produced, more lives shattered, and more painful stories are told and retold.

For years, civil society groups across the world labored to destabilize this horrific status quo. They organized, held vigils, wrote letters to their political representatives and so on. To no avail. Frustrated by government inaction, a small group of activists sailed to Gaza in a small boat in August 2008, succeeding in doing what the United Nations has failed to do: they broke, however fleetingly, the Israeli siege on the impoverished Strip.

This symbolic action of the Free Gaza movement had a tremendous impact. It sent a clear message to Palestinians in occupied Palestine, that their fate is not only determined by the Israeli government and military machine; that there are other actors who are capable of challenging the dreadful silence of the international community; that not all Westerners are as complicit as their governments in the prolonged suffering of the Palestinian people. 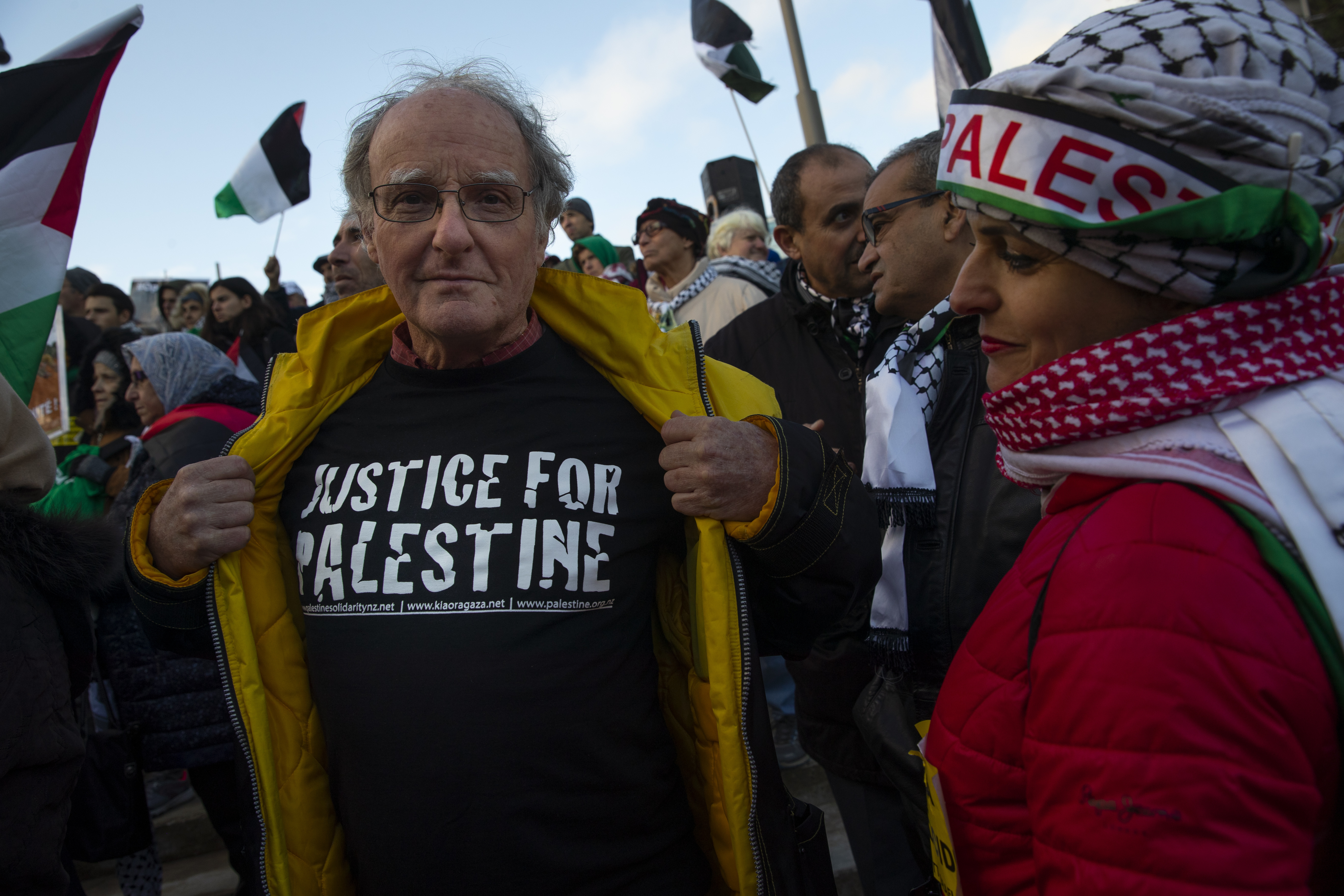 Demonstrators gather outside the International Criminal Court, ICC, urging the court to prosecute Israel’s army for war crimes in The Hague, Netherlands, Friday, Nov. 29, 2019. The ICC prosecutor was directed to reconsider her decision to not pursue charges in the Gaza Freedom Flotilla case. (AP Photo/Peter Dejong)

Since then, many more solidarity missions have attempted to follow suit, coming across the sea atop flotillas or in large caravans through the Sinai desert. Some have successfully reached Gaza, delivering medical aid and other supplies. The majority, however, were sent back or had their boats hijacked in international waters by the Israeli navy.

The outcome of all of this has been the writing of a new chapter of solidarity with the Palestinian people that went beyond the occasional demonstration and the typical signing of a petition.

The second Palestinian Intifada, the uprising of 2002, had already redefined the role of the “activist” in Palestine. The formation of the International Solidarity Movement (ISM) allowed thousands of international activists from around the world to participate in “direct action” in Palestine – thus fulfilling, however symbolically, a role that is typically played by a United Nations protective force.

ISM activists, however, employed non-violent means of registering civil society’s rejection of the Israeli occupation. Expectedly, Israel did not honor the fact that many of these activists came from countries deemed “friendly” by Tel Aviv’s standards. The killing of US and British nationals Rachel Corrie and Tom Hurndall in Gaza in 2003 and 2004 respectively, was just the precursor of Israeli violence that was to follow.

In May 2010, the Israeli navy attacked the Freedom Flotilla consisting of the Turkish-owned ship ‘MV Mavi Marmara’ and others, killing ten unarmed humanitarian workers and wounding at least 50 more. As was the case with the murder of Rachel and Tom, there was no real accountability for the Israeli attack on the solidarity boats.

It must be understood that Israeli violence is not random nor is just a reflection of Israel’s notoriety and disregard of international and humanitarian law. With every violent episode, Israel hopes to dissuade outside actors from getting involved in “Israeli affairs”. Yet, time and again, the solidarity movement returns with a defiant message, insisting that no country, not even Israel, has the right to commit war crimes with impunity.

Following a recent meeting in the Dutch city of Rotterdam, the International Coalition of the Freedom Flotilla, which consists of many international groups, has decided to, once more, sail to Gaza. The solidarity mission is scheduled for the summer of 2020, and, like most of the 35 previous attempts, the Flotilla is likely to be intercepted by the Israeli navy. Yet, another attempt will likely follow, and many more, until the Gaza siege is completely lifted. It has become clear that the purpose of these humanitarian missions is not to deliver a few medical supplies to the nearly two million besieged Gazans, but to challenge the Israeli narrative that has turned the occupation and isolation of Palestinians to a status quo ante, to an “Israeli affair”.

According to the United Nations Office in Occupied Palestine, the poverty rate in Gaza seems to be increasing at an alarming speed of 2% per year. By the end of 2017, 53% of Gaza’s population lived in poverty, two-thirds of them living in “deep poverty”. This terrible number includes over 400,000 children.

An image, a video, a chart or a social media post can never convey the pain of 400,000 children, who experience real hunger every single day of their lives so that the Israeli government may achieve its military and political designs in Gaza. Indeed, Gaza is not just an Israeli missile, a demolished home, and an injured child. It is an entire nation that is suffering and resisting, in near-complete isolation from the rest of the world.

True solidarity should aim at forcing Israel to end the protracted occupation and siege on the Palestinian people, sailing the high seas, if necessary. Thankfully, the good activists of the Freedom Flotilla are doing just that.