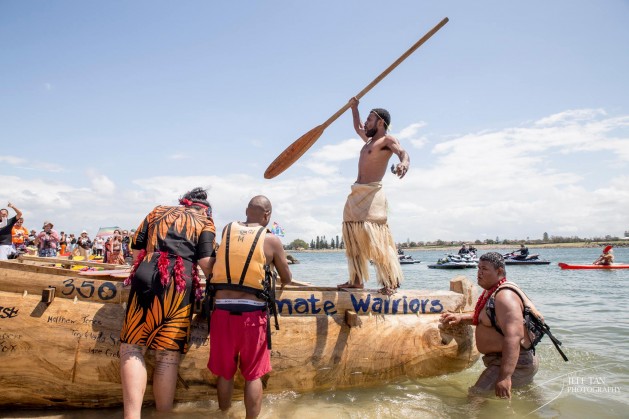 The Front Line Of Climate Change Is Here And Now

Above: Pacific Climate Warriors organised a canoe flotilla in Australia on Oct. 17 to protest against the Australian coal industry and call for action on climate change. Credit: Jeff Tan for 350.org.

A group of young Pacific islanders calling themselves the Climate Warriors arrived in Australia this month to mount a protest against the Australian coal industry and call for action on climate change.

Kaio Tiira Taula, one of the Climate Warriors, has written this open letter to the people of Australia.

TUVALU, Oct 25 2014 (IPS) – The fate of my country rests in your hands: that was the message which Ian Fry, representing Tuvalu gave at the United Nations Climate Change Conference in Copenhagen five years ago. This is also the message that the Pacific Climate Warriors have come to Australia to bring.

We have come here, representatives of 12 different Pacific island nations, which are home to 10 million people, to ask the people of Australia to reject plans to double Australia’s exports of coal and to become the biggest exporter of gas in the world.

We want Australia (and other industrialised countries which also rely on the burning and extraction of fossil fuels) to understand that for every kilo of coal which they dig, or every gas well they make, there is someone in the islands who is losing their home.

My home, Tuvalu, is a series of three islands and six atolls halfway between Hawaii and Australia. Tuvalu is the fourth smallest country in the world and home to 11,000 people and most of us have been there for generations

Tuvalu, like many of our island neighbours, is living on borrowed time with climate change expected to displace over 300 million people worldwide before 2050. The displacement has already started to happen with thousands of my countrymen forced to leave by the rising King Tides and the long drought affecting our food supplies.

One family drew international attention when they became the first refugees to seek asylum in New Zealand based on grounds of climate change.

Aside from the humanitarian cost, there is also the loss to culture and diversity with several thousands of years of civilisation and history wiped from the face of the planet. And there is nothing that we can do about this except hope that you and your country will see the value of keeping our island above water and make the decision to turn away from fossil fuels.

This is the reason I have joined with the Pacific Climate Warriors to come to Australia and represent my country and our region.

For years our leaders have tried to convey our message in the halls of power to politicians, diplomats and whoever else would listen, but the arguments of economic growth have always taken precedence over the arguments for our survival.

I now come as an envoy to ask the people of Australia to please consider the plight of the 11,000 people in Tuvalu and the further millions in other Pacific islands and other low lying nations which may expect to be wiped out by climate change.

In my time in Australia I have heard plenty about the importance of the Australian coal industry and the jobs and economic growth that it generates, yet it is us in the islands who are paying the price with our land, our culture and our livelihoods. This hardly seems a fair price to pay when we gain nothing from this industry.

This is why it incenses me so much to hear that coal is good for humanity or coal will be the solution to poverty. Coal will benefit only the wealthy whereas it will be the poor, like us, who suffer.

This is why it is the ultimate insult to hear that wealthy corporations are acting in the interests of the world’s poor when they dig and burn coal.

The Australian people have the power to decide the fate of my country and others in the Pacific. You need to let your government know that you have considered the matter carefully that you choose human life over the digging and export of coal.

If you do not, you must be ready to open your borders for the flood of climate refugees who will end up on your doorstep.