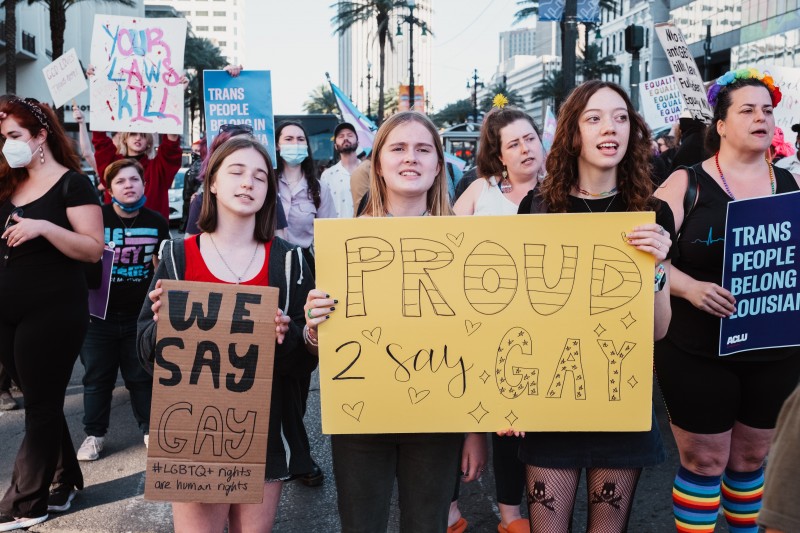 Baton Rouge, Louisiana – On May 3, the Louisiana House of Representatives Education Committee struck down this state’s version of the “Don’t Say Gay” bill by a seven to four vote. This decision came after a mass upsurge of students, parents, teachers, social workers and LGBTQ+ community members demanding to shut the bill down.

Once a legislator introduces a bill in either chamber of the legislature (House or Senate), it must meet the approval of a legislative committee before going for a full floor vote. The committee hearing is the first chance that opponents of the bill have to kill it.

At the hearing, after five or six conservative leaders testified in favor of the bill, dozens of LGBT+ activists and their allies went on to denounce it.

Students put up a tremendous fight. Quest Riggs of Real Name Campaign read aloud a letter that over 60 middle school students put together: “Students feel safe talking to social workers at school, especially when they can’t talk to someone at home. This bill could lead to students not having a safe space at school.”

The Reverend Cheramie of the Metropolitan Community Church of New Orleans made the point, “We are dangerously close to the 1970s effort to prevent homosexuals from being teachers.” Sam King, a school social worker, underscored how “exclusionary and discriminatory legislation such as HB387 put marginalized youth at greater risk for mental health issues and suicide. The supporters of this bill say that they are advocating to protect children when in fact they are putting LGBTQ+ children directly in harm’s way.”

Dodie Horton, the politician who introduced the bill, could hardly answer questions about her own legislation. When the committee representatives asked her what the bill’s implications would be for a teacher introducing themselves as “Mr.” or “Ms.” (which indicate gender identity), Horton responded: “No, that’s not gender identity, gender identity is, you know, if I say I’m a man one day and then the next day I’m a woman.” Many critics have accused the Don’t Say Gay bill of using “gender identity” as a dog-whistle for anti-LGBT+ bigotry, but Horton openly admitted that this was the case.

“She can’t defend her bill because she didn’t even write it,” one online observer noted. HB 837 was a copycat of Florida’s Don’t Say Gay bill, which itself came from the boardrooms of billionaire-backed far-right organizations.

Tuesday’s showing of overwhelming opposition came out of weeks of mass mobilizing. Students walked out of several schools, and hundreds of people blocked busy downtown intersections during a protest for Trans Day of Visibility. Two critical swing votes on the committee, Representatives Freiberg and Hilferty, saw their voicemails and inboxes flooded with hundreds of messages. The week before the hearing, protesters showed up at both of their offices to leave signs and a letter condemning HB 837. Both voted no.