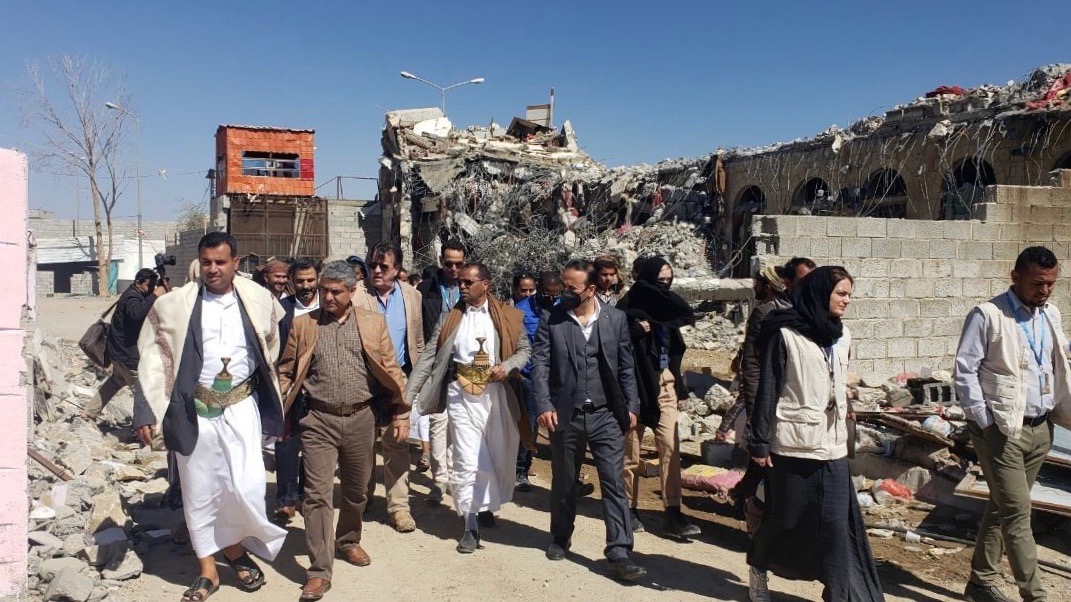 The Global Links Of The Recent Escalation In The Yemen Conflict

Above Photo: The UN resident coordinator for humanitarian affairs in Yemen, William David Grisley, visited the site of the Saudi-led coaltion’s bombing in the reserve prison in Sa’ada province on Thursday. Saba.

The failure of the UN to play its primary role of a peacemaker in Yemen affects its humanitarian interventions.

Provides opportunities for the global war industry to make profits out of human misery.

The last month has seen a drastic escalation in the war in Yemen. According to the UN, January will most likely be the month with the highest ever casualties reported since the war began in 2014. The January 21 strike on a prison in Sa’ada which killed 91 people marked the highest death toll in a single strike in the last three years. The number of airstrikes carried out by the Saudi Arabia-led coalition last December was already the highest in years. In all likelihood, this figure will be even higher by the end of January.

On the other hand, the Houthis have demonstrated their capacity and willingness to retaliate against members of the Saudi-led coalition by sending drones and missiles hundreds of miles away to Abu Dhabi.

Exactly at a time when decisive international intervention to find a political solution to end the war is needed, the UN and the international community have shown their unwillingness to take the extra efforts required. This has encouraged the Saudi-led coalition to push harder to realize their regional ambitions and the war industry to make profits despite the obvious human costs.

The recent escalation in Yemen is attributed to the UAE’s increased involvement in ground offensives against the Houthis in Marib and Sabwah provinces located in the southern parts of the country and considered crucial for the future of the Saudi-led coalition’s presence. The regions also have significant natural resources such as oil and gas.

The Houthis lost their advances made after months of being on the offensive on both the fronts earlier this month. The loss is directly attributed to the UAE’s increased intervention on the ground through the so-called Giant Brigade. The advances made by the Saudi-led coalition have helped the forces loyal to Abdrabbuh Masour Hadi and may shatter the Houthis’ hopes to gain control over resources crucial to maintain the economy to serve the majority of the population in the north.

The Houthis’ actions against the UAE, such as seizure of its ship in the Red Sea and attacks on Abu Dhabi, can be seen as a message to the country’s rulers about the consequences of their intervention in Yemen.

Failure Of The UN

The United Nations has failed to play a constructive role to achieve peace in Yemen and has increasingly limited its role as a relief agency. It has refused to reconsider Resolution 2216 adopted in 2015, which imposes sanctions on the Houthis despite the changes in the reality on the ground. It has ignored the fact that the actual government in Sanaa run by the Houthis is a legitimate party in the conflict. The UN has continued to support the Hadi government, which has limited its acceptability and made it appear biased and compromised in the eyes of the Houthis.

As Nabeel Khoury told Al-Jazeera, the UN has failed to convince the parties of the war that all the natural resources in the country – in Marib and elsewhere – have to be shared by all. It has instead repeated the position taken by the Saudi-led coalition that the Hadi government is the only legitimate one in the country.

In October last year, the UN failed to renew the mandate of the Group of Imminent Experts on Yemen, effectively stopping its investigations into the war crimes and human right violations being committed in the country. With the only means of international accountability for the parties involved in the war being removed, they were given a free hand to escalate the war. The rise in the number of the Saudi coalition’s airstrikes in the aftermath of this decision acts as proof.

The failure of the UN to play any significant role in resolving the conflict in Yemen is clear as it has even failed to convince the Saudi coalition to end its criminal air, sea, and land blockade of Yemen, leading to growing disenchantment about the UN’s humanitarian role in the country. In the last two years, using the situation created by the COVID-19 pandemic, several countries have reduced their funding to agencies that are working to provide crucial humanitarian aid to millions of Yemenis. This has resulted in an increase in the food insecure population and forced several UN agencies to reduce their role at a time when the people need it the most.

A War For Corporate Gains

The attacks on Abu Dhabi have opened new possibilities for the global war industry. After the January 17 attacks, the US, in addition to expressing solidarity with the UAE, also offered fresh supplies of weapons to the country. This was despite the expressed position of the Biden administration in the months after taking office last year of ending US involvement in the war in Yemen.

The Biden administration decided to sell USD 23 billion worth of armaments to the UAE last year and also vowed to supply so-called “defensive weapons” to Saudi Arabia. The rejoicing among the world’s largest weapon manufacturers following the Abu Dhabi attacks underlines the well-known fact of the profitability of sustained global conflicts. This also raises questions with regard to the dubious role of the Biden administration in the war in Yemen, which has also prevented political resolutions in the UN Security Council.