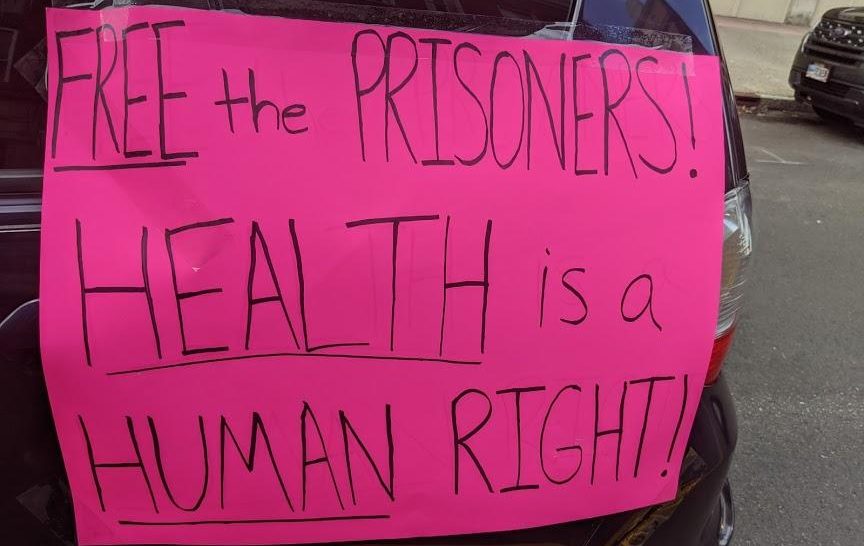 The Good, The Bad, And The Ugly

A new BJS report shows that U.S. jails reduced their populations by 25% in the first few months of the pandemic. But even then, the U.S. was still putting more people in local jails than most countries incarcerate in total.

This month, the Bureau of Justice Statistics released two reports with updates on city and county jail populations nationwide: Jail Inmates in 2019 and Impact of COVID-19 on the Local Jail Population, January-June 2020. After a year of upheaval due to the pandemic, the first report is already out-of-date and mainly useful as a historical document. The second report, however, answers some important questions about the decisions local officials made when the high stakes of jail incarceration – for individual and public health – were put into stark relief by the pandemic. Their decisions, and the resulting jail population changes in the first half of 2020, hold important lessons for ongoing and future decarceration efforts; here we outline some of those lessons – the good, the bad, and the ugly.

The good: Significant drops in jail detention early on, and especially for low-level offenses and among women

First, we saw that local law enforcement, courts, and jails were able to quickly reduce jail populations when they had to. Before the pandemic, jails nationwide held almost 742,000 people on any given day, and over the course of the year, there were 10.3 million jail admissions. But by the end of June 2020, the jail population had dropped by 25%; 185,000 fewer people were held in jails in June 2020 compared to June 2019. Most of that change occurred in the first half of 2020, largely fueled by decreasing admissions and, to a lesser extent, by expedited releases due to the pandemic. In the one-year period ending June 30, 2020, there were 1.67 million fewer jail admissions – a 16% drop compared to the preceding year. Of those who were booked into jails between March 1 and June 30, 2020, 208,500 (almost 9%) received an expedited release in response to COVID-19.

Second, we saw that when pressed, local criminal justice systems did shift toward some of the common-sense changes that reform advocates have long called for (at least temporarily): eliminating unnecessary arrests and incarceration for offenses and violations that don’t threaten public safety, and ending pretrial detention for most, if not all, defendants.

Early in the pandemic, many police departments were encouraged to use arrest as “a tool of last resort,” reducing stops, shifting to citations in lieu of arrest, and adopting other best practices. At the same time, many courts took action to reduce admissions and pretrial detention. For example, Maine state courts vacated all outstanding bench warrants for unpaid court fines and fees and for failure to appear, and California reduced bail to $0 for most low-level offenses. Jail administrators and sheriffs, too, found ways to reduce detention: The Cuyahoga County (Cleveland, Ohio) Jail, for example, stopped admitting people on new misdemeanor charges, except for domestic violence charges.

The BJS Impact of COVID-19 report shows that these local efforts made a difference: The number of people held for misdemeanors dropped by 45% by June 2020 compared to 2019, and the number of people held pretrial dropped by 21% – or about 100,000 people – over the same period. As we have argued before, incarceration is especially counterproductive for people convicted of low-level offenses like misdemeanors, as it cuts people off from their families, housing, and jobs while yielding virtually no benefits to public safety.

Finally, the BJS report shows that these jail population changes also disproportionately benefitted women: The number of women held in local jails decreased by 37% from June 2019 to June 2020, compared to a 23% drop among men. 80% of the women who go to jail are mothers and most of them are primary caretakers of their children. This news is a welcome change from the broader trend of the past few years, in which we have seen increases in women’s jail incarceration while the men’s jail population has fallen.

The bad: Jail reductions didn’t go far enough, and quickly ticked back up

Of course, the Impact of COVID-19 report also reveals some disturbing jail trends during the pandemic. First, local justice systems could and should have done more to further depopulate jails, where social distancing is impossible and the flow of people in and out of facilities puts everyone around them, incarcerated or not, at greater risk. Even after reducing admissions and increasing releases, a significant number of jails were still overcrowded: average jail occupancy rate fell from 81% to 60% from 2019 to 2020, but in June 2020, 1 in 14 jails still held over 100% of their rated capacity. 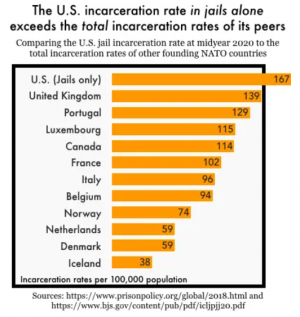 Furthermore, despite its 25% decline in jail populations, the U.S. jail incarceration rate alone (that is, excluding people held in state and federal prisons) still far exceeds international norms. After cutting jail populations during the early months of the pandemic, the U.S. still locked up more people per capita in jails alone than most countries do in any type of confinement facilities. At the end of June 2020, 167 per 100,000 U.S. residents were held in local jails; that’s still well over the total incarceration rates of peer countries like the U.K., Canada, and France.

It’s easy to see where jail decarceration efforts fell short. In particular, jails could have gone much further in reducing the number of people held pretrial. While it’s good that the number of people held pretrial declined by 21%, 381,000 people were still held pretrial at the end of last June. The percentage of people held in local jails pretrial (69%) was actually higher than at the same time a year before (65% in June 2019). As a reminder, people held pretrial are unconvicted and legally presumed innocent. While some defendants are detained because a court deems them a significant safety or non-appearance risk, many are there simply because they cannot afford to pay cash bail. During normal times pretrial detention has detrimental effects on defendants’ employment, health, housing, financial stability, and family wellbeing, but especially during a pandemic, pretrial detention can also be fatal. For example, two Texas men, aged 64 and 57 (one experiencing homelessness at the time of his arrest), recently died while being held pretrial in the Harris County Jail on $1,000 and $1,500 bonds, respectively. One of them died of COVID-19.

Finally, the BJS report confirms the rebound in jail populations starting in May 2020 that we identified previously using a different data set – indicating that more dramatic population reductions were possible, but efforts were not sustained, with local justice systems only too eager to return to “business as usual.” Jail populations declined by 190,800 (27%) between the end of February and the end of April alone, but in May and June, populations ticked back up by 29,600, essentially undoing over 15% of the cuts achieved before May. This finding is in line with our research showing that jail populations nationwide have been creeping up since late spring. While populations are still lower than they were pre-pandemic, the data suggests the early reforms instituted to mitigate COVID-19 have largely been abandoned. With most people in local jails still unvaccinated, this has put vast numbers of people at enormous and unnecessary risk for COVID-19.

The ugly: Racial disparities in jail incarceration widened during the pandemic 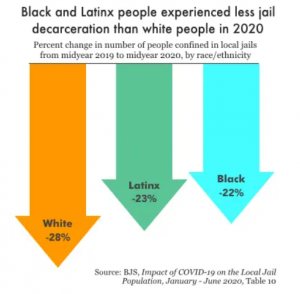 One especially troubling finding in the Impact of COVID-19 report: The decrease in jail populations did nothing to address the glaring racial disparities in jails. In fact, while the total jail population dropped by 25% between June 2019 and June 2020, racial disparities increased over the same period. In June of 2019, Black people were incarcerated in jails at about 3.3 times the rate of white people; a year later, the racial gap had widened so that Black people were jailed at 3.5 times the rate of white people. Moreover, the decrease in white jail incarceration outpaced the decreases among Black, Hispanic, Asian, Native Hawaiian/Pacific Islander, and multi-racial people. For example, the number of white people in jails dropped by almost 28% while the number of Black people in jails fell by only 22%. These findings reflect the dangers of not centering racial justice in decarceration. It is not enough to focus only on “reducing incarceration” – decarceration efforts must also address long-standing racial disparities and should never make the criminal justice system less equitable.

In all, the BJS Impact of COVID-19 report proves that local and state justice systems can quickly and significantly reduce jail populations, as shown by the initial responses to COVID-19 – but it also shows that they could have diverted from jail or released far more people, and far more equitably. Although jail populations dropped significantly at the beginning of the pandemic, these changes did not reduce racial disparities in incarceration, nor did they sufficiently reduce pretrial detention. Even after reducing jail populations, the U.S. jail incarceration rate still greatly exceeds that of our peer countries, and more recent data suggests that jail populations have been increasing steadily since late spring.

Moving forward, justice system authorities should make permanent the strategies that led to the jail reductions achieved during the pandemic, and push themselves to go further now that they have seen what is possible. The number of people jailed for misdemeanors or held pretrial, as well as the number of women in jails, should never return to pre-pandemic levels. Finally, states and counties must take deliberate action to eliminate racial disparities in jails as they take the next steps toward decarceration.