The Grassroots Group Behind the Egyptian Rebellion

Tamarod is a new grassroots protest movement in Egypt that has been behind the recent nationwide protests against President Mohammed Morsi, a year after he took office.

The group, whose name means “rebel” in Arabic, claims it has collected more than 22 million signatures for a petition demanding Mr Morsi step down and allow fresh presidential elections to be held.

Following Sunday’s massive demonstrations, in which millions of people took to the streets in Cairo and other cities, Tamarod gave the president an ultimatum to resign by 17:00 (15:00 GMT) on Tuesday or face a campaign of “complete civil disobedience”.

It urged “state institutions including the army, the police and the judiciary, to clearly side with the popular will as represented by the crowds”.

“There is no way to accept any half measures,” it said. “There is no alternative other than the peaceful end of power of the Muslim Brotherhood and its representative, Mohammed Morsi.”

Many protests have accused the president of putting the interests of the Muslim Brotherhood, the powerful Islamist movement to which he belongs, ahead of the country’s as a whole. His supporters insist they are not.

Tamarod was founded in late April by members of the Egyptian Movement for Change – better known by its slogan Kefaya (Enough) – which pushed for political reform in Egypt under former president Hosni Mubarak in 2004 and 2005. Although Kefaya joined in the mass protests that forced him to resign in 2011, it did not play a prominent role.

Tamarod focused on collecting signatures for a petition that complains:

Tamarod’s activists quickly became a familiar sight on Egypt’s streets, often blocking traffic to hand out petitions. The group also collected signatures on its website, as well as on Facebook and Twitter. 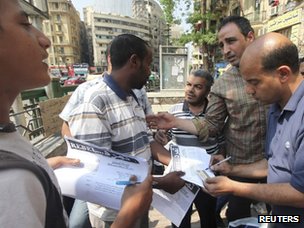 By late June, Tamarod said it had gathered 15 million signatures, all of which it insisted had been checked against a recent interior ministry electoral register. Each signatory puts his or her name, province of residence and ID number.

However, the Muslim Brotherhood’s Freedom and Justice Party (FJP) dismissed the claim, saying Tamarod had only collected 170,000.

On Saturday – a day before the mass protests it organised to mark the first anniversary of Mr Morsi taking office – Tamarod’s total was reported to have reached 22 million, more than a quarter of Egypt’s population.

One of the founders of Tamarod has called the success “astonishing”.

“I can’t tell how many members out there. I can think that millions of Egyptians are members,” Ahmed al-Masry told the Associated Press.

“At one point, people gave up [on President Morsi]. No-one is heard but the president and his tribe.”