Though The New York Times itself has not reported it, it’s No. 2 lawyer told a group of judges that the prosecution of Julian Assange could have dire consequences for the Times itself, explains Ray McGovern.

Well, lordy be. A lawyer for The New York Times has figured out that prosecuting WikiLeaks publisher Julian Assange might gore the ox of The Gray Lady herself.

The Times’s deputy general counsel, David McCraw, told a group of judges on the West Coast on Tuesday that such prosecution would be a gut punch to free speech, according to Maria Dinzeo, writing for the Courthouse News Service.

Curiously, as of this writing, McCraw’s words have found no mention in the Times itself. In recent years, the newspaper has shown a marked proclivity to avoid printing anything that might risk its front row seat at the government trough.

Stating the obvious, McCraw noted that the “prosecution of him [Assange] would be a very, very bad precedent for publishers … he’s sort of in a classic publisher’s position and I think the law would have a very hard time drawing a distinction between The New York Times and WikiLeaks.”

That’s because, for one thing, the Times itself published many stories based on classified information revealed by WikiLeaks and other sources. The paper decisively turned against Assange once WikiLeaks published the DNC and Podesta emails.

More broadly, no journalist in America since John Peter Zenger in Colonial days has been indicted or imprisoned for their work. Unless American prosecutors could prove that Assange personally took part in the theft of classified material or someone’s emails, rather than just receiving and publishing them, prosecuting him merely for his publications would be a first since the British Governor General of New York, William Cosby, imprisoned Zenger in 1734 for ten months for printing articles critical of Cosby. Zenger was acquitted by a jury because what he had printed was proven to be factual—a claim WikiLeaks can also make. 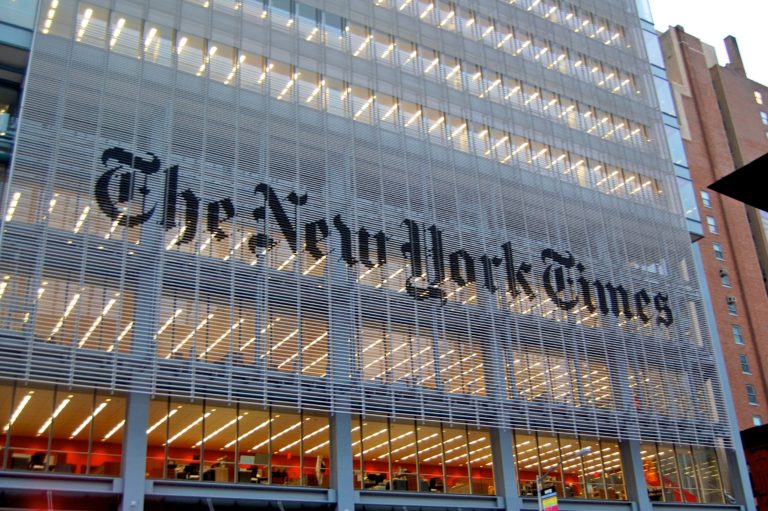 At the Times HQ on Eighth Ave: Quietly realizing the consequences for itself.

McCraw went on to emphasize that, “Assange should be afforded the same protections as a traditional journalist.” The Times lawyer avoided criticizing what the United Nations has branded — twice — the “arbitrary detention” of Assange and his incommunicado, solitary confinement-like situation in the Ecuador embassy in London since March. Multiple reports indicate the new government of Ecuador will evict Assange into the hands of British police.

These days we need to be thankful for small favors. It’s nice to know the Times now considers Assange a journalist, even though it did not spring to his defense when he was being widely branded a “high-tech terrorist” — as can be seen here in my very last appearance on CNN’s domestic broadcast almost eight years ago.

Mike Pompeo, when he was CIA director, called WikiLeaks a “non-state, hostile intelligence service,” and Assange’s lawyers believe there is already a sealed indictment against him in the state of Virginia. Assange fears that if he is arrested on flimsy bail skipping charges he will be extradited to the United States.

Is the Fourth Estate Dead?

Ten years ago I contended that The Gray Lady — like the rest of the Fourth Estate — was moribund. More recently, I have been saying it is dead. I now stand corrected. Rumors of its death have been exaggerated. But how does one characterize its current state?

Let me borrow a memorable phrase from philosopher Billy Crystal, playing Miracle Max in “The Princess Bride,” while trying to bring the character Wesley back to life. He is just “mostly dead,” Chrystal insisted.

And so it is with today’s corporate media, with a tiny chance, now that The New York Times, watching out for its own equities, might help Assange avoid prosecution for practicing journalism. Actually, he has been accused so far of no crime of any kind.

Eight years ago, when the Sam Adams Associates for Integrity gave Assange its annual award, the Fourth Estate was a bit more than just a distant memory. So we attempted to put his award in historical perspective. Below is the textof the citation presented to Assange, together with the traditional SAAI corner-brightener candlestick holder, by former UK Ambassador Craig Murray (himself an SAAI laureate) and Daniel Ellsberg.

It seems altogether fitting and proper that this year’s award be presented in London, where Edmund Burke coined the expression “Fourth Estate.” Comparing the function of the press to that of the three Houses then in Parliament, Burke said:
“…but in the Reporters Gallery yonder, there sits a Fourth Estate more important far than they all.”

The year was 1787—the year the U.S. Constitution was adopted. The First Amendment, approved four years later, aimed at ensuring that the press would be free of government interference. That was then.

With the Fourth Estate now on life support, there is a high premium on the fledgling Fifth Estate, which uses the ether and is not susceptible of government or corporation control. Small wonder that governments with lots to hide feel very threatened.

It has been said: “You shall know the truth, and the truth shall set you free.” WikiLeaks is helping make that possible by publishing documents that do not lie.

Last spring, when we chose WikiLeaks and Julian Assange for this award, Julian said he would accept only “on behalf or our sources, without which WikiLeaks’ contributions are of no significance.”

We do not know if Pvt. Bradley Manning gave WikiLeaks the gun-barrel video of July 12, 2007 called “Collateral Murder.” Whoever did provide that graphic footage, showing the brutality of the celebrated “surge” in Iraq, was certainly far more a patriot than the “mainstream” journalist embedded in that same Army unit. He suppressed what happened in Baghdad that day, dismissed it as simply “one bad day in a surge that was filled with such days,” and then had the temerity to lavish praise on the unit in a book he called “The Good Soldiers.”

Julian is right to emphasize that the world is deeply indebted to patriotic truth-tellers like the sources who provided the gun-barrel footage and the many documents on Afghanistan and Iraq to WikiLeaks. We hope to have a chance to honor them in person in the future.

Today we honor WikiLeaks, and one of its leaders, Julian Assange, for their ingenuity in creating a new highway by which important documentary evidence can make its way, quickly and confidentially, through the ether and into our in-boxes. Long live the Fifth Estate!

Presented this 23rd day of October 2010 in London, England by admirers of the example set by former CIA analyst, Sam Adams