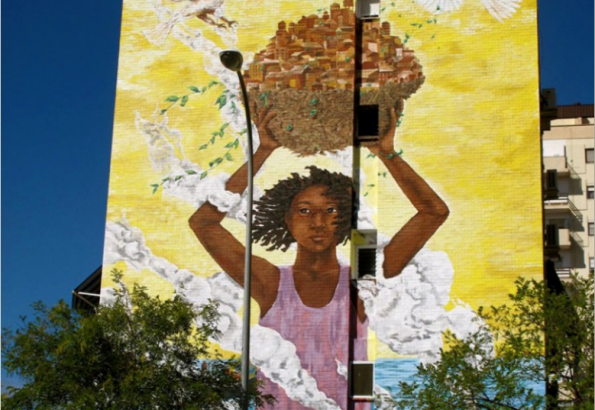 Above Photo: From CreativeResistance.org. Art For All Mural by Katie Yamasaki.

America’s refusal to fund and sustain its intellectual and cultural heritage means it has lost touch with its past, obliterated its understanding of the present, crushed its capacity to transform itself through self-reflection and self-criticism, and descended into a deadening provincialism. Ignorance and illiteracy come with a cost. The obsequious worship of technology, hedonism and power comes with a cost. The primacy of emotion and spectacle over wisdom and rational thought comes with a cost. And we are paying the bill.

The decades-long assault on the arts, the humanities, journalism and civic literacy is largely complete. All the disciplines that once helped us interpret who we were as a people and our place in the world—history, theater, the study of foreign languages, music, journalism, philosophy, literature, religion and the arts—have been corrupted or relegated to the margins. We have surrendered judgment for prejudice. We have created a binary universe of good and evil. And our colossal capacity for violence is unleashed around the globe, as well as on city streets in poor communities, with no more discernment than that of the blinded giant Polyphemus. The marriage of ignorance and force always generates unfathomable evil, an evil that is unseen by perpetrators who mistake their own stupidity and blindness for innocence.

“We are in danger of forgetting, and such an oblivion—quite apart from the contents themselves that could be lost—would mean that, humanly speaking, we would deprive ourselves of one dimension, the dimension of depth in human existence,” Hannah Arendt wrote. “For memory and depth are the same, or rather, depth cannot be reached by man except through remembrance.”

Those few who acknowledge the death of our democracy, the needless suffering inflicted on the poor and the working class in the name of austerity, and the crimes of empire—in short those who name our present and past reality—are whitewashed out of the public sphere. If you pay homage to the fiction of the democratic state and the supposed “virtues” of the nation, including its right to wage endless imperial war, you get huge fees, tenure, a television perch, book, film or recording contracts, grants and prizes, investors for your theater project or praise as an pundit, artist or public intellectual. The pseudo-politicians, pseudo-intellectuals and pseudo-artists know what to say and what not to say. They offer the veneer of criticism—comedians such as Stephen Colbert do this—without naming the cause of our malaise. And they are used by the elites as attack dogs to discredit and destroy genuine dissent. This is not, as James Madison warned, the prologue to a farce or a tragedy; we are living both farce and tragedy.

“The withdrawal of intellectuals from political concerns is itself a political act,” sociologist C. Wright Mills wrote. “Which is to say that it is at best a pseudo-withdrawal. To withdraw from politics today can only mean ‘in intent’; it cannot mean ‘in effect.’ For its effect is to serve whatever powers prevail, even if only by distracting public attention from them. Such attempts may be the result of fear or fashion; or of sincere conviction—induced by success. Regardless of the motive, the attempted withdrawal means to become subservient to prevailing authorities and to allow the meaning of one’s own work to be determined, in effect, by other men.”

Amid the swelling disparity between reality and reality as the corporate state seeks to have it portrayed, the idiocy and mendacity of the elites and their courtiers grow more ludicrous. The institutions that educated the public and fostered the common good are even more fiercely attacked, defunded and rendered anemic. The dumbing down of the country—fed by the crippling of the safe spaces where ideas, dissent and creativity could be expressed, where structures and assumptions could be questioned—accelerates.

Presidential candidate Donald Trump may be boorish, narcissistic, stupid, racist and elitist, but he does not have Hillary Clinton’s carefully honed and chilling amoral artifice. It was she, and an ethically bankrupt liberal establishment, that created the fertile ground for Trump by fleecing the citizens on behalf of corporations and imposing the neoliberal project. If she is elected, Trump may disappear, but another Trump-like figure, probably even more frightening, will be vomited up from our cultural and political sewer.

Trump and Clinton, along with fellow candidate Bernie Sanders, refuse to admit what they know: Our most basic civil and political rights have been taken from us, the corporate oligarchy will remain entrenched in power no matter who wins the presidency, and elections are a carnival act. The downward spiral of lost jobs and declining incomes, of shredded civil liberties, of endless war, is unstoppable as long as we use the traditional mechanisms of reform, including elections, to try to cope with the existential threat we face. A vote for Clinton, in essence, is a vote for Trump or someone as bad as Trump. Right-wing populism, here and in Europe, is not the product of an individual but the disenfranchisement, rage and despair stemming from the damage caused by globalization. And until we wrest back control of our destiny by breaking corporate power, demagogues like Trump, and his repugnant doppelgangers in Europe, will proliferate.

The institutions that make possible wisdom, knowledge, self-criticism and transcendence are in ruins. Public radio and public television, created to give a voice to those not beholden to the elites, are now echo chambers for the privileged and the powerful. The arts, like public broadcasting a victim of massive cuts by government, have descended to the lowest common denominator. Symphony orchestras are closing along with libraries. Music and art have been removed from school curriculums. Theater, along with the film industry, has been taken over by corporations such as Disney. Audiences on Broadway and in movie houses participate in exorbitantly priced forms of escapism that, at their core, celebrate American power and narcissism.

These artists and intellectuals, who did not cater to the herd, were nationally known figures. They altered our perceptions. They were taken seriously. They sparked contentious debate, and the elites attempted, sometimes successfully, to censor their work. It is not that new independent, brilliant and creative minds are not out there; it is that nearly all of them—Tupac Shakur and Lupe Fiasco having been two exceptions—are locked out. And this has turned our artistic, cultural and intellectual terrain into a commercialized wasteland. I doubt that a young Bruce Springsteen or a young Patti Smith, or even a young Chomsky, all of whom exhibit the rare quality of never having sold out the marginalized, the working class and the poor, and who are not afraid of speaking truths about our nation that others will not utter, could today break into the corporatized music industry or the corporatized university. Sales, branding and marketing, even in academia, overpower content.

T.S. Eliot, seven decades ago, warned of a condition that now enmeshes us. In his“What Is a Classic?” address to the Virgil Society in 1944 he argued that a civilization that did not engage with its greatest artists and intellectual traditions, that did not protect and nurture its artistic and intellectual patrimony, committed suicide.

“In our age,” Eliot said, “when men seem more than ever prone to confuse wisdom with knowledge, and knowledge with information, and to try to solve problems of life, in terms of engineering, there is coming into existence a new kind of provincialism, not of space, but of time; one for which history is merely the chronicle of human devices which have served their turn and been scrapped, one for which the world is the property solely of the living, a property in which the dead hold no shares. The menace of this kind of provincialism is, that we can all, all the peoples on the globe, be provincials together: and those who are not content to be provincials, can only become hermits.”