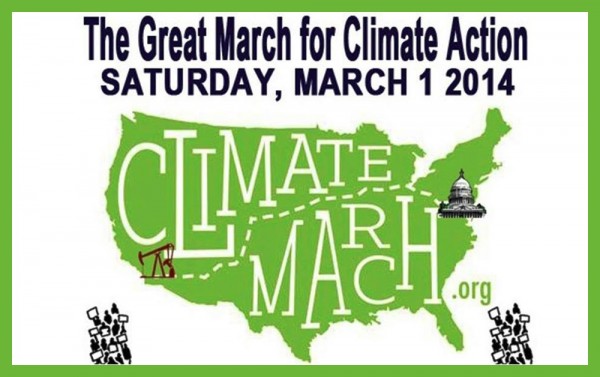 The Great March For Climate Action

Staff Note: It is powerful to see so many people mobilizing around climate change. Our hope is that they avoid the pleading approach with elected officials that 350.org has been using and instead demand action before support. A strong stance would be to withhold votes for any Democrats until the President makes changes such as rejecting the pipeline, banning all fracking, withdrawing funds for new nuclear power plants, dedicating more funds to actual renewable energy, etc. An even stronger stance would be to realize that corporate parties such as the Republicans and Democrats are incapable of taking action that goes against their corporate funders and pledging not to vote for them at all.

The vast majority of scientific academies agree that the burning of fossil fuels is contributing to more intense heat waves, extreme weather, rising of sea levels, ocean acidification, and the melting of the glaciers. No wonder Secretary of State John Kerry’s finally admitted recently to students and civic leaders in Jakarta: “Climate change is the world’s largest weapon of mass destruction.”

To add gravitas to this proclamation, Secretary Kerry must make the National Interest Determination that turning on the spigot for 830,000 barrels per day of more climate destabilizing, ecosystem poisoning tar sands oil through the Keystone XL pipeline is not in the interest of the US. He and President Obama should then lead the world in signing international accords that pledge to reduce the levels of greenhouse gases.

We need to keep the fossil fuels in the ground. For that matter, Governor Jerry Brown should make good on his proclamations on the necessity to confront the growing climate crisis by instituting a moratorium on hydraulic fracturing, or fracking. This extreme well-stimulation technique not only employed in the Bakken Oil Boom of North Dakota, and the Marcellus Shale Natural Gas Boom on the Eastern Seaboard, but here in California as well. Fracking is happening now on the Monterey Shale formation between OC and the Bay Area, offshore of the California Coast including Huntington Beach and Santa Barbara, and proposed in a number of areas in Southern California, including Carson and Brea.

Blasted at high pressure miles underground, millions of gallons of precious fresh water laden with sand and plastic balls, mixed in a toxic soup of chemicals, fracture the shale and release [methane] gas and [dirty and volatile] oil. Instead of moving toward energy efficiency and conservation, added to proven clean and renewable technologies of wind, water, and solar, we keep pumping the earth dry of its stores of carbon, all for the burning for electricity and transportation. We thus heat the atmosphere, waste and pollute ground and ocean water, industrializing rural landscapes, and causing earthquakes from disposal of wastewater in deep wells.

LA is setting a great example of taking action for the Governor, voting Friday on a moratorium against this dangerous practice, as fracking continues unabated with threats to the Baldwin Hills, Venice Beach, South LA and beyond.

So, what can average citizens do to take action on climate change? We have a voice, we have boots on the ground, and we need to step out and let people know that we don’t have any time left to confront this mounting crisis.

On Saturday, hundreds of people will rally for clean energy and healthy communities in Wilmington-Port of LA—one of the most fossil-fuel polluted communities in the country. As part of a coast-to-coast Great March for Climate Action, demonstrators will march from the Port through the streets to downtown LA, speaking out to impacted communities and demanding government action against climate change.

The march starts in Wilmington because it has the largest concentration of dirty oil refineriesin California. They process 650,000 barrels per day of crude oil every day, pouring pollution into the local, regional and national environment.This,coupled with air pollution from the Ports of LA and Long Beach and the trucks moving to- and fro- on the freeways, impacts the local neighborhoods, primarily working class people of color, who suffer disproportional rates of asthma and cancer.

California’s greenhouse gas plan requires almost zero refinery emissions reductions despite hopes the plan would clean up refinery greenhouse gases and the smog-forming toxics emitted from burning fossil fuels. And with the uptick in fracking the Monterey Shale and a plan to import tar sands oil from Canada, via leaky and oft-exploding rail cars, to the Valero Refinery in Wilmington, how can we ever hope to stabilize the climate and clean up our communities?

Thousands are expected to march after a 9:00 a.m. rally with celebrities, politicians, and activists at the Great Lawn at Wilmington Waterfront Park in Los Angeles Harbor. This is the second year in a row a wide array of environmental, humanitarian, religious, political, labor, civil rights, and community organizations, led by SoCal Climate Action Coalition 350, Sierra Club, and Food & Water Watch, have come together in Southern California to demand action on climate change. Last year, over 100 groups supported the “Forward on Climate LA” March and Rally that brought 2,000 people into the streets of downtown Los Angeles to tell President Obama to take action on climate change.

Hundreds will then continue their journey for 3,000 miles towards Washington D.C., launching the coast-to-coast Great March for Climate Action. Nearly a hundred marchers have signed up to walk 14 miles a day, for eight straight months, arriving in DC in time for the November mid-term elections. The goal: energize everyday people to make addressing the climate crisis a high priority all across the country.

It is time for all of us to step up! Join the Great March in a city near you.

For additional info, check out the the Great March for Climate Action website.

This work is licensed under a Creative Commons Attribution-Share Alike 3.0 License.

Jack Eidt (jack dot eidt at wilderutopia dot com), Founder and Publisher of WilderUtopia, is a novelist, urban planner, and environmental advocate. In addition to writing regular articles for WilderUtopia, he has published opinion/editorials in various periodicals, including the Los Angeles Times,Orange County Register, Voice of OC, LA Progressive, CityWatch LA, Win:Win Journal, and CounterPunch, and has been featured onPacifica Radio, NPR, and local public television.