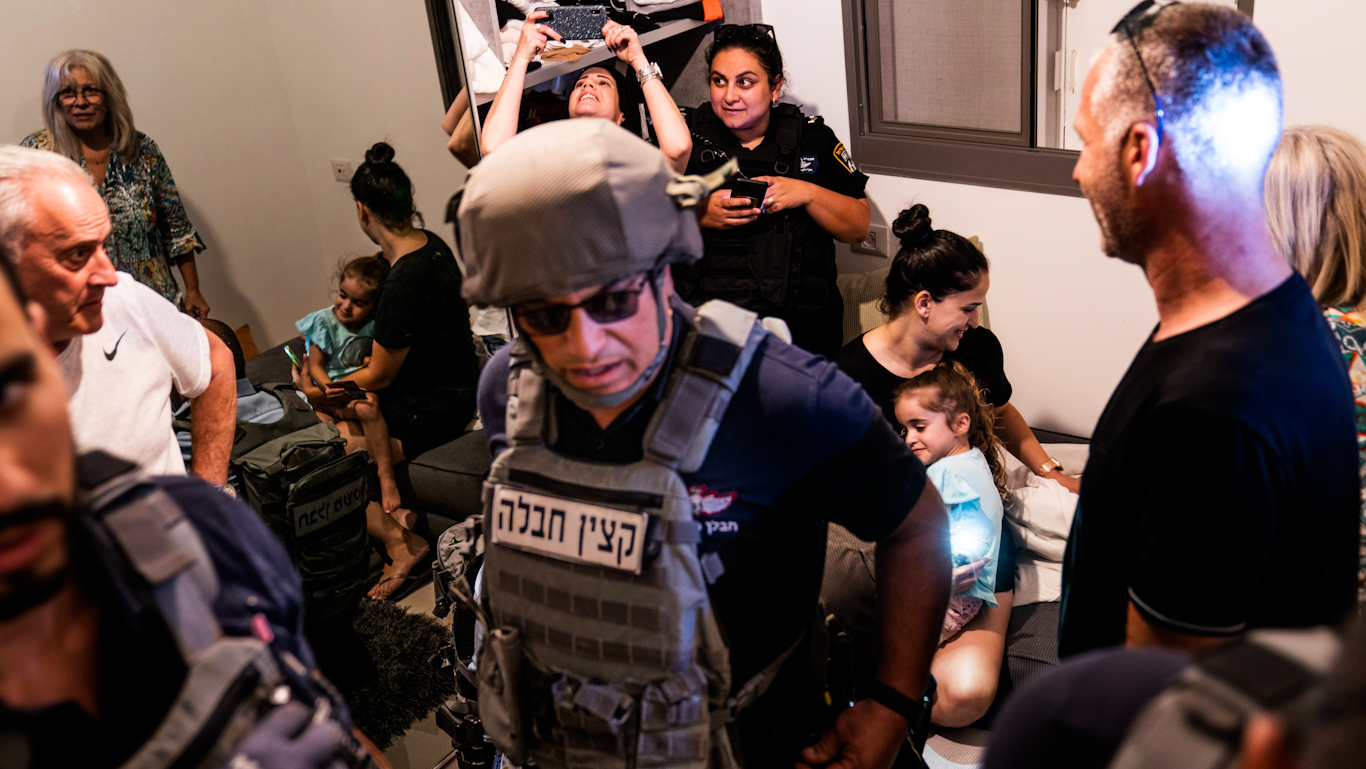 ‘The Hamas’ are Coming: A View of the Violence from Inside Israel

Above Photo: Israelis await sirens warning of a possible “Hams’ rocket attack in a home in Ashkelon (John Minchillo/AP)

There are never Palestinians, never people, only “The Hamas.”

The Hamas thinks;” “The Hamas believes;” “The Hamas should know;” “When the Hamas understands, he will stop;” and finally, “When The Hamas is hit hard he will never dare to attack Israel again.”

**Occupied Jerusalem — After less than 48 hours in Jerusalem, it’s clear to me that the slaughter in Gaza will not end anytime soon. There is broad popular support in Israel for the endless bloodshed and Benjamin Netanyahu is as strong as ever both domestically and internationally.

According to the Israeli press, Netanyahu and his cabinet all received calls from President Joe Biden and members of his cabinet demonstrating their undying, never-ending, and unconditional support for the bloodletting of Palestinians. As hard as this is to see — particularly from Jerusalem, where I am less than an hour drive from Gaza — there should be no surprise.

When Joe Biden says he is a Zionist, he means he supports apartheid, ethnic cleansing and genocide in Palestine. It means that he will give unlimited money and weapons to Israel to execute the cruelest, bloodiest, most racist policies against the Palestinians, no questions asked.

All morning long (and it’s only 9 a.m.) the Israeli TV (all channels) displays guests of expert panelists, former IDF generals, and colonels (who knew there were so many?) who spew lies to excuse, justify, and even glorify the IDF actions in Gaza.

“We all support the IDF and its commanders,” they say as reports of more death and destruction come out of the Gaza Strip. There was some memo no doubt that told everyone on TV to say “The Hamas” whenever they talk about Palestinians in Gaza.

There are never Palestinians, never people, only “The Hamas” — and “The Hamas” is, by the way, male and singular (in Hebrew). “The Hamas thinks;” “The Hamas believes;” “The Hamas should know;” “When the Hamas understands, he will stop;” and finally, “When The Hamas is hit hard he will never dare to attack Israel again.”

Needless to say, none of the panelists are Palestinians. Instead, Israeli news programs have their “Arab Affair” experts on, their “The Hamas” experts, and their experts on the “Arab community in Israel.”

Israeli Jews know enough to analyze, explain and mostly justify Israeli violence against Palestinians everywhere, yet nowhere does one hear that the indigenous people of Palestine — the people to whom this country belongs, and who have been wronged in so many ways — are speaking up.

This morning I received an email from a friend in East Jerusalem. In this email, she poses a question that is perhaps impossible to answer:

Yesterday my youngest grandson who turned 15 at the beginning of this month was walking in our neighborhood towards the barbershop to have a haircut when he was stopped by 10 soldiers who beat him up before letting him go. Why? Can anybody who has any common sense answer me? There were no demonstrations, and the people in our neighborhood were going about their own business. The soldiers were in their full gear and were not in any danger.”

How can one explain the actions of armed, racist gangs who wear an official uniform, who represent the State and use their power and status and weapons to beat and intimidate people who want to live a normal life? It is not unlike trying to understand the actions of former Minneapolis police officer and now inmate Derek Chauvin, who calmly and coldly murdered George Floyd in broad daylight, in front of people holding cameras and taking videos. Can a rational, healthy mind explain any of this?

A general strike was declared in Palestine on May 18 and the subsequent rallies and protests that took place throughout Palestine left several Palestinians dead and wounded. In advance of the strike, some Israeli employers already said that any Palestinian not showing for work that day would be fired. About one-third of the Israeli economy relies heavily on the Palestinian citizens of Israel. In Israeli hospitals, large numbers of doctors, nurses, and maintenance staff are Palestinian citizens of Israel. They have the capacity to bring the hospitals and the Israeli economy to its knees.

It was reported that the supervisor for Palestinian schools within 1948 Palestine in the Northern District already requested the names of any teachers who did not show up for work in Qalasawe and Taibe, two large Palestinian cities. According to Israeli law, the firing of an employee must be done in person and the employee may have a representative and the various unions to provide legal representation free of charge. The big question mark remains: Will Palestinian citizens of Israel be able to avail themselves of this service and this law?

I was also warned by friends that when I come to visit people anywhere in the area of the “Small Triangle” — or the cities of Qalansawe, Taibe, and Tira — to come during the day. After dark, I was warned, the roads are closed because of protests and the police arrest, beat up, and shoot indiscriminately.

Towards the end of the 1967 Israeli assault on Arab lands, the eastern part of the city of Jerusalem was occupied by Israel, including the Old City and the al-Aqsa Mosque. This assault had enormous consequences and in Israeli collective memory there is one sentence that is the most iconic of the entire war. When the Haram al-Sharif was taken by Israeli forces, the commander reported “Har Ha’bait Beyadeinu” — The Temple Mount is in our hands. The most iconic photo from that war is that of the conquering soldiers by the Western Wall.

The commander, Mordechai Gur, was not a religious man. His soldiers were not religious people and in those days one did not see the religious Zionists that one sees in Israel today. This comment was made because even secular Israelis look at the Haram al-Sharif — the al-Aqsa compound — and believe it should be used as a national symbol, a place that represents something that Israel lost and deserves to take back. And so, the desire to see al-Aqsa destroyed and a structure they call a temple built instead is not merely a religious sentiment but a neo-fascist and nationalistic one as well.

Violence, racism, neo-fascist attitudes, and a toxic mix of religion and nationality make Zionism very dangerous. From Gaza to al-Aqsa, from the Naqab in the south to the Wadi Ara in the north, we are seeing the dangerous elements of Zionism at work.