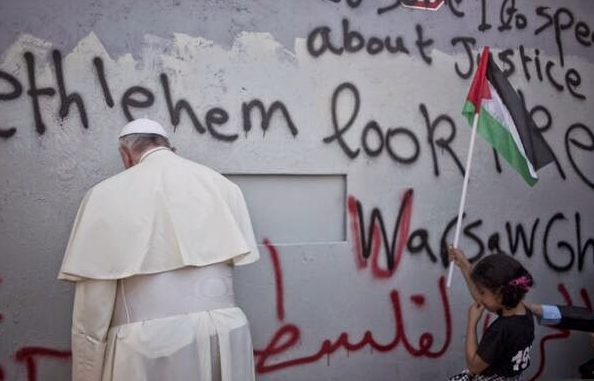 The Iconic Photo Of The Pope With ‘Free Palestine’ Slogan

Palestinian Refugees Welcome The Pope: The story behind the iconic photo at the Separation Wall

An activist from Aida Refugee Camp walks with spray paint in hand toward the Wall near Rachel’s Tomb, on May 24th, 2014 after the military gate and a section of the sniper tower were painted over in preparation for Pope Francis’s visit to Bethlehem. (Photo: Kelly Lynn)

In an effort to resist the Bethlehem Municipality’s efforts to beautify a section of the Apartheid Wall where Pope Francis was scheduled to pass, Local activists from Aida Refugee Camp gathered to paint slogans both against Israeli occupation and welcoming His Holiness, on the eve of his arrival, on May 24th 2014.

“Why do we have to make it beautiful?  It’s not,” said 23-year-old Mohammed Abu Srour, one of activists involved.

Activists from Aida Refugee Camp paint slogans on a newly painted portion of theApartheid Wall and military gate near Rachel’s Tomb in Bethlehem on May 24th, 2014. (Photo: Kelly Lynn)

The group successfully maneuvered past a few PA security personnel to reach the wall and defame a newly painted military gate, a sliver of the wall and the paint-bombed sniper tower near Rachel’s Tomb.  Israeli soldiers opened the gate after several minutes and activists backed off before soldiers retreated and closed the gate.  One activist started again tagging, “Welcome Pope,” but was chased down the street by several Israeli soldiers who emerged from a re-opened gate.

A Palestinian activist runs after painting the sniper tower near Rachel’s Tomb inBethlehem on May 24th, 2014, as Israeli soldiers attempt to detain him. (Photo: Kelly Lynn)

Palestinian Authority officials then addressed the Israeli soldiers at the gate, proceeding to talk for several minutes.  When asked why they were present, they responded by saying they were only there to secure the visit of an Orthodox leader that day, who would eventually pass in a six car caravan through the gate around 1:10 PM.  Soon after, armed PA soldiers blocked the sidewalk to anyone trying to reach the gate.  The activists went home, and their slogans in red and black popped against the uniform canvas of slate grey.

That evening, word came to Abu Srour that their work had been painted over.

PA soldiers block the sidewalk toward the Israeli military gate near Rachel’s Tomb,after Palestinian activists were chased away following their activity on May 24th, 2014. (Photo: Kelly Lynn)

The next morning, the Pontiff arrived via helicopter, landing near Dheisheh Refugee Camp in Bethlehem and the children of Aida Camp assembled.  They marched toward the repainted section and waited for “Baba” to arrive.  Beats from the Aida Youth Center’s Keshafa program, a youth drum line, echoed through hot air.  Local leaders from the Al Rowwad and Lagee Centers dispersed signs to children declaring prisoner rights, dreams and freedom, the usual.

A few minutes before Pope Francis arrived, spray cans surfaced and activists from the previous day’s action began to paint over the newly, newly-painted wall and gate.  Mohammed climbed his friend’s shoulders and because of the frenzy, security personnel could not be bothered. “They painted all of the wall silver, you couldn’t see anything we did yesterday, so we decided to write again for the Pope.  We want him to pay attention to our issues as normal Palestinians,” explained Abu Srour.

Mohammed Abu Srour, 23, writes slogans on the military gate which was painted over twice in preparation for Pope Francis’s visit May 25th, 2014. The completed slogans read, “Pope, we need some1 to speak about justice,” and “Pope, Bethlehem look like Warsaw Ghetto.” (Photo: Kelly Lynn)

And then, in a glass-covered pristine white pick-up truck, he came.

“I didn’t expect the Pope to go down and start to read the sentences and meet the children and people there.  He shocked us,” said Abu Srour.

He stepped onto the red-carpeted stairs of his custom ride and down onto the severed Jerusalem-Hebron Road, where he walked deliberately toward the gate, as if it was actually planned (it was not according to his security team).  One must have a little more experience with His Holiness to know if his face is always so somber.  But it was somber.  He didn’t ignore the two young girls to his right but his solemn focus was on the gate, the Wall.  Initially, he seemed to express awe as he reached out his hand to touch just under Abu Srour’s hurried handiwork,  “Pope, Bethlehem look like Warsaw ghetto.”

Pope Francis prays at the military gate in the Israeli built Apartheid Wall on May 25th, 2014. (Photo: Kelly Lynn)

Pope Francis backs up slowly with his head bowed after praying at the military gate in the
Israeli built Apartheid Wall on May 25th, 2014. (Photo: Kelly Lynn)

He stayed for several minutes as guards kept the distance between him and the mostly cell phone photographers jockeying for a shot.  An Israeli soldier could be seen observing the situation from the sniper tower above.

His head bowed, the Pontiff touched his forehead to the monolith before slowly retreating back to his car and continuing his route to the Nativity Church.  It was an undeniable picture of solidarity for Palestinians who have suffered under the wall and its effects for a decade now.

Later he performed Mass to thousands of locals and baseball-capped international tourists in Manger Square, along with Mahmoud Abbas and his entourage, though they left early.  The massive backdrop depicted the Pontiff greeting Mary and Joseph and the infant Jesus, swaddled in an unmistakable Palestinian keffiyeh.  Walkways and rooftops teamed with press, but it was his prayer at the 8-meter high Apartheid Wall that made headlines from the BBC to TIME.

That afternoon, he made his way to Dheisheh Refugee Camp for a ceremony and meeting with mostly children from the camp including participants from neighboring Azza and Aida camps.  As his caravan entered the camp, local kids clamored against a metal barrier for a glimpse and held signs that read in English, “Every year, Israel arrests over 500 children.”  After the ceremony, he was whisked away in a helicopter, rising slowly above families who had brought chairs and children to their roofs to wave.

Children from Dheisheh Refugee Camp wave as Pope Francis passes in a caravan on his way to meet with young refugees from Bethlehem’s three camps, Dheisheh, Aida and Azza, on May 25th, 2014. (Photo: Kelly Lynn)

The Pope supports President Mahmoud Abbas, but Abu Srour says the Palestinian Authority’s stance on promoting a two state solution doesn’t address his circumstances or hopes as a refugee.

“My original village – it’s in Beit Nattif.  It’s outside the West Bank.  They occupied it in 1948 and by that I will lose my right as a refugee.  I will represent my case better than anyone. Because I feel – I live in that situation everyday.”

Still, no one seemed disappointed with “Baba’s” unexpected display.

Original artwork welcoming Pope Francis, created by residents from DheishehRefugee Camp hangs at the entrance to the community on May 25th, 2014. (Photo: Kelly Lynn)