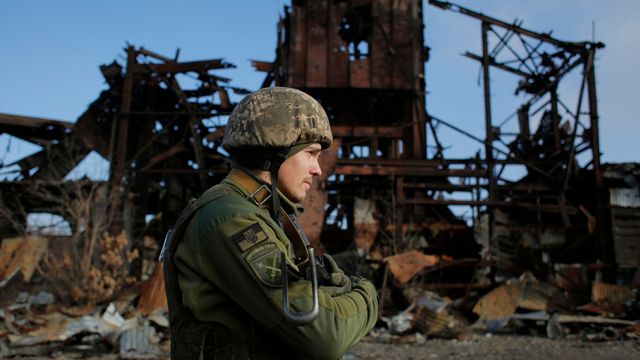 The Impeachment Crisis And US War Plans Against Russia

Above Photo: A Ukrainian soldier, donning U.S. made equipment, takes his front line position at destroyed Butovka coal mine in the town of Avdiivka in the Donetsk region, Ukraine. (AP Photo/Vitali Komar)

With each passing day of the impeachment crisis, the distance between the official reasons for the conflict in Washington and the real reasons grows wider.

It has become increasingly clear that the central issue is not Trump’s attempt to “solicit interference from a foreign country” by “pressuring a foreign country to investigate one of the president’s main domestic political rivals,” as alleged in the whistleblower complaint that triggered the impeachment inquiry.

Rather, the conflict raging within the state centers on Trump’s decision to temporarily delay a massive weapons shipment to Ukraine.

The ferocity with which the entire US national security apparatus responded to the delay raises the question: Is there a timetable for using these weapons in combat to fight a war against Russia?

A New York Times front-page exposé published Monday, coming in at 5,000 words and bearing six bylines, makes it clear that Trump’s decision to withhold military aid—over a month before his phone call with Ukrainian President Zelensky—triggered the conflict that led to the president’s impeachment.

As the Times reports, “Mr. Trump’s order to hold $391 million worth of sniper rifles, rocket-propelled grenades, night vision goggles, medical aid and other equipment the Ukrainian military needed to fight a grinding war against Russian-backed separatists would help pave a path to the president’s impeachment.”

The newspaper states that Trump decided to hold up the distribution of military aid to Ukraine on June 19 after he read a news article saying that the “Pentagon would pay for weapons and other military equipment for Ukraine, bringing American security aid to the country to $1.5 billion since 2014.”

Trump’s action sparked a “fiery internal debate,” according to the Times, leading to an intervention by the “national security team” arrayed in a “united front” around National Security Advisor John Bolton, an architect of the Iraq war.

After Trump rejected the officials’ calls for the aid to be released, saying, “We are pissing away our money,” details of the hold on the military assistance were leaked to the press and a high-ranking CIA official submitted a “whistleblower” complaint accusing Trump of soliciting “dirt” on his political rival.

The CIA spun up its “Mighty Wurlitzer.” The intelligence agencies and the media began promoting the narrative that Trump held up the military aid to hurt his political rival, even though Trump made his decision on the aid package a month before he asked Zelensky to investigate former Vice President Joe Biden.

These actions would ultimately lead to only the third impeachment of a president in the history of the United States, throwing the country into a constitutional crisis with an unknown outcome.

All of this begs the question: Given the enormous political cost of impeachment to those who initiated it, what could possibly explain the urgency and ferocity with which the entire national security establishment responded to a delay in the distribution of weapons to Ukraine?

Is there a timetable for using these weapons in combat? Is the United States planning a provocation that would thrust Ukraine into a major new military offensive?

The Russian military is certainly drawing such conclusions. In a statement earlier in December, the chief of the Russian General Staff, Valery Gerasinov, said the increased tempo of US exercises in Eastern Europe indicates that indicates the US is making plans for “using their forces in a large-scale military conflict.”

“Military activities are increasing in the Baltic States and Poland, in the Black and Baltic Seas,” Gerasimov said. “The intensity of the [NATO] bloc’s military exercises is growing. Their scenarios point to NATO’s deliberate preparation to use their forces in a large-scale military conflict.”

In February, the United States will ship some 20,000 soldiers to Europe to participate in a military exercise that will be the largest deployment of forces to the European continent in a quarter-century. The exercise, dubbed Defender 2020, will include 17,000 European troops and, according to Breaking Defense, see NATO forces “extend their logistics trains and communications lines from the Baltic to the Black Seas.” The exercise will cost $340 million.

The National Defense Authorization Act, passed with overwhelming bipartisan support within days of the House vote to impeach Trump, includes an additional $300 million in military aid to Ukraine as part of a record-shattering increase in US military spending.

Overall, the United States and its NATO allies have provided over $18 billion in military and other aid to Ukraine since the 2014 US-backed coup that overthrew the pro-Russian president, Viktor Yanukovych, and installed the current pro-US regime. This was on top of what Assistant Secretary of State Victoria Nuland bragged in 2013 was “over $5 billion” in aid to “ensure a secure and prosperous and democratic Ukraine.”

The bags of money handed out by the CIA via various “civil society” pass-throughs in Ukraine helped overthrow its elected government and bring to power a US proxy regime supported by the extreme right.

In 2013, the US supported a measure that would integrate Ukraine into a political association and trade pact with the EU. This was intended to pave the way for Ukraine joining NATO. When the Yanukovych government opposed the agreement, the US launched the 2014 coup, installing a puppet regime viciously hostile to Russia.

The 2014 coup was a pivotal point in the efforts of the United States to militarily encircle and ultimately carve up Russia. Since the dissolution of the USSR, the United States has led a systematic drive to expand NATO right up to and beyond the borders of the former USSR.

In March 2004, NATO accepted into its ranks the three Baltic states—Estonia, Latvia, and Lithuania—which were once part of the Soviet Union, and four other states. The accession of the Baltics signaled that NATO enlargement would not halt at the former border of the Soviet Union. The EU followed suit in May 2004, extending its border eastward to include a number of former Soviet republics and allies, including the Baltic states, the Czech Republic, Hungary, Poland, Slovakia, and Slovenia.

But the US was taken aback by Russia’s determined response to the Ukraine coup. Russia annexed Crimea following a referendum in which the overwhelming majority of the population of the enclave supported leaving Ukraine. Moscow at the same time backed a secessionist movement in the country’s east.

Given these circumstances, Foreign Affairs writes:

In fact, that Ukraine is at the center of this storm [the impeachment crisis] should not be surprising at all. Over the past quarter-century, nearly all major efforts at establishing a durable post–Cold War order on the Eurasian continent have foundered on the shoals of Ukraine. For it is in Ukraine that the disconnect between triumphalist end-of-history delusions and the ongoing realities of great-power competition can be seen in its starkest form.

Despite the unforeseen and disastrous consequences of the CIA-backed coup in Ukraine, the United States is determined to continue its efforts to militarily encircle Russia, which it sees as a major obstacle to its central geopolitical aim—control of the Eurasian landmass, which would give it a staging ground for a conflict with China.

The relentless drive for military escalation has brought the Democrats into an alliance with the fascistic right in Ukraine, which has held street demonstrations to pressure President Zelensky to continue and escalate the US-backed proxy war against Russia.

One thing is clear. If there is indeed a timetable to use the hundreds of millions of dollars in weapons being transferred to Ukraine, such a war risks a nuclear escalation. In 2018, Elbridge A. Colby, one of the principal authors of the National Defense Strategy issued by the Pentagon in January of that year, published an article titled, “If You Want Peace, Prepare for Nuclear War.”

The risks of nuclear brinkmanship may be enormous, but so is the payoff from gaining a nuclear advantage over an opponent.

Any future confrontation with Russia or China could go nuclear… In a harder-fought, more uncertain struggle, each combatant may be tempted to reach for the nuclear saber to up the ante and test the other side’s resolve, or even just to keep fighting.

Amid a growing upsurge of the class struggle all over the world, the Trump administration, representing a despised and isolated capitalist class, can see in war a means to tamp down, as one comment in the Financial Times recently put it, the “class war” at home, and “make domestic antagonism seem beside the point, if not unconscionable.”

But it is the international growth of the class struggle that provides the means to oppose the war drive of the ruling elite. As mankind enters the third decade of the 21st century, the advanced stage of war preparations on the part of the ruling class makes it all the more urgent, in the immortal words of Leon Trotsky, to counterpose to the “war map” of the capitalists the “map of the class struggle.”

This means unifying the growing struggles and forging a common movement against war and attacks on democratic rights, as an essential part of the struggle for socialism.