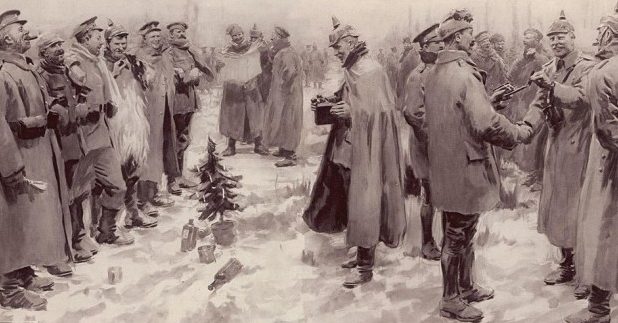 The Importance Of The December 1914 Christmas Truce

Above: From The Illustrated London News of January 9, 1915: “British and German Soldiers Arm-in-Arm Exchanging Headgear: A Christmas Truce between Opposing Trenches.”

Note: The Christmas Truce is always worth remembering, even troops on the front lines have the power to ignore their government and disobey orders. People not in the military also have the power to say ‘no’. It is an example of people having the power. We can have peace — if we want it. We can economic, racial and environmental justice — if we want it. We should not underestimate our power.

A Christmas truce letter is here.

And here’s a script that turns the above letter into a play that can be performed on Christmas by anyone who likes: PDF.

Here’s an account from someone who was there: Bullets and Billets.

Here’s Christmas in the Trenches lyrics by John McCutcheon, and videos below.

Here is a 2-page document with lyrics to the two songs: PDF.

The 1914 Christmas Truce of one hundred years ago was an extraordinary example of how wars can only continue if soldiers agree to fight.

In December 1914, an amazing outbreak of peace, though brief, occurred when as many as 100,000 of the million troops, or ten percent, stationed along the 500 mile Western Front in World War I, mutually, and spontaneously, stopped fighting for at least 24-36 hours, December 24-26. Isolated instances of local truces occurred at least as early as December 11 and continued sporadically until New Year’s Day and into early January 1915.

Despite general’s orders strictly forbidding any kind of fraternization with the enemy, At least 115 fighting units were involved among British, German, French and Belgian soldiers. Many points along the front witnessed trees with lit candles, soldiers coming out of their trenches only 30 to 40 yards apart to shake hands, share smokes, food, and wine, and sing with one another. Troops from all sides took advantage to bury their respective dead lying all over the battlefields, and there were even reports of joint burial services. In some cases, officers joined the widespread fraternization. There is even mention here and there of a soccer game played between the Germans and the British. (See SOURCES).

An impressive display of the human spirit as this was, it was not, however, a unique occurrence in the history of war. In fact, it was a resurgence of a long-established tradition. Informal truces and small localized armistices and incidents of friendship shared between enemies have taken place during other prolonged periods of military fighting over several centuries, perhaps longer.[1] This includes the Viet Nam war as well.[2]

Retired Army Lt. Col. Dave Grossman, a professor of military science, has argued that humans have a deep, innate resistance to killing that requires special training to overcome.[3] I was unable to thrust my bayonet into a dummy during my USAF ranger training in early 1969. If I had been an army grunt instead of an Air Force officer, and a few years younger, I wonder, would it have been easier to kill on command? My commander was obviously very unhappy when I refused to use my bayonet because the military is well aware that men can only be made to kill by coercion. The tyranny needed to make an army work is fierce. It knows it cannot allow dialogue about its mission and must quickly patch any cracks in the blind obedience system. I was immediately placed on the “Officer Control Roster” and faced royal scoldings behind closed doors in which I was threatened with court-martial offenses, shamed over and over, and accused of being a coward and traitor. My unpremeditated refusal to participate in the bayonet drill, I was told, created morale problems that threatened to interfere with our mission.

Yale University social psychologist Stanley Milgram in 1961, only three months after the beginning of the trial of Adolph Eichmann in Jerusalem for his role in coordinating the Holocaust, began a series of experiments to better understand the nature of obedience to authority. The results were shocking. Milgram carefully screened his subjects to be representative of typical US Americans. Briefed on the importance of following orders, participants were instructed to press a lever inflicting what they believed was a series of shocks, gradually escalating at fifteen-volt increments, every time the nearby Learner (actor) made a mistake in a word-matching task. When the Learners began screaming in pain, the Experimenter (authority figure) calmly insisted that the experiment must continue. A startling 65 percent of Milgram’s Participants administered the highest possible level of electricity—a lethal jolt that might have killed someone actually receiving the shocks. Additional experiments conducted over the years at other universities in the United States, and in at least nine other countries in Europe, Africa, and Asia, all revealed similar high rates of compliance to authority. A 2008 study designed to replicate the Milgram obedience experiments while avoiding several of its most controversial aspects, found similar results.[4]

Ordinary people, simply doing their jobs, and without any particular hostility on their part, can become agents in a terrible destructive process . . . The most common adjustment of thought in the obedient subject is for him (her) to see himself  (herself) as not responsible for his (her) own actions.  . . He (she) sees himself (herself) not as a person acting in a morally accountable way but as the agent of external authority, “doing one’s duty” that was heard time and again in the defense statements of those accused at Nuremberg. . . . In a complex society, it is psychologically easy to ignore responsibility when one is only an intermediate link in a chain of evil action but is far from the final consequences. . . . Thus there is a fragmentation of the total human act; no one man(woman) decides to carry out the evil act and is confronted with its consequences.[5]

Milgram reminded us that a critical examination of our own history reveals a “democracy” of installed authority no less tyrannical, thriving on an obedient population of insatiable consumers dependent upon the terrorization of others, citing destruction of the original Indigenous inhabitants, dependence upon slavery of millions, internment of Japanese Americans, and the use of napalm against Vietnamese civilians.[6]

As Milgram reported, “the defection of a single individual, as long as it can be contained, is of little consequence. He will be replaced by the next man in line. The only danger to military functioning resides in the possibility that a lone defector will stimulate others.”[7]

In 1961 moral philosopher and political theorist Hannah Arendt, a Jew, witnessed the trial of Adolf Eichmann. She was surprised to discover that he was “neither perverted nor sadistic.” Instead, Eichmann and many others just like him “were, and still are, terrifyingly normal.”[8]  Arendt described the capacity of ordinary people to commit extraordinary evil as a result of social pressure or within a certain social setting, as “the banality of evil.” From Milgram’s experiments, we know that the “banality of evil” is not unique to the Nazis.

Eco-psychologists and cultural historians have argued that human archetypes rooted in mutual respect, empathy, and cooperation have been important for our species to get this far on our branch of evolution. However, 5,500 years ago, around 3,500 BCE, relatively small Neolithic villages began mutating into larger urban “civilizations.” With “civilization,” a new organizational idea emerged—what cultural historian Lewis Mumford calls a “megamachine,” comprised totally of human “parts” forced to work together to perform tasks on a colossal scale never before imagined. Civilization saw the creation of bureaucracies directed by a power complex of an authority figure (a king) with scribes and messengers, which organized labor machines (masses of workers) to construct pyramids, irrigation systems, and huge grain storage systems among other structures, all enforced by a military. Its features were centralization of power, separation of people into classes, lifetime division of forced labor and slavery, arbitrary inequality of wealth and privilege, and military power and war.[9] Over time, civilization, which we have been taught to think of as so beneficial for the human condition, has proven severely traumatic for our species, not to mention for other species and the earth’s ecosystem. As modern members of our species (excluding the fortunate Indigenous societies who somehow escaped assimilation), we have been stuck for three hundred generations in a model requiring massive obedience to large vertical power complexes.

Mumford makes clear his bias that autonomy in small horizontal groups is a human archetype that has now become repressed in deference to obedience to technology and bureaucracy. The creation of human urban civilization has brought about patterns of systematic violence and warfare previously unknown,[10] what Andrew Schmookler calls the “original sin” of civilization,[11] and Mumford, “collective paranoia and tribal delusions of grandeur.”[12]

“Civilization” has required massive civil obedience to enable vertical authority structures to prevail. And it hasn’t mattered how that hierarchical vertical power is achieved, whether, through monarchial succession, dictators, or democratic elections, it invariably functions through various forms of tyranny. Autonomous freedoms that people once enjoyed in pre-civilization tribal groups now defer to belief in authority structures and their controlling ideologies, which have been described as oppressive “domination hierarchies” where private property and male subjugation of women prevail, by force if necessary.[13]

The emergence of vertical authority structures, the rule of kings and nobles, ripped people from historical patterns of living in small tribal groups. Along with forced stratification, the separation of people from their intimate connections with the earth produced deep insecurity, fear, and trauma to the psyche. Ecopyschologists suggest that such fragmentation led to an ecological unconscious.[14]

Thus, humans desperately need to re-discover and nourish examples of disobedience to political authority systems which have created 14,600 wars since the advent of civilization some 5,500 years ago. Over the past 3,500 years there have been nearly 8,500 treaties signed in efforts to end warfare, to no avail because the vertical structures of power have remained intact which demand obedience in their efforts to expand territory, power or resource base. The future of the species, and lives of most other species, are at stake, as we wait for humans to come to our right mind, both individually and collectively.

The 1914 Christmas Truce of one hundred years ago was an extraordinary example of how wars can only continue if soldiers agree to fight. It needs to be honored and celebrated, even if it was only a flash of a moment in time. It represents the potential of human disobedience to insane policies. As German poet and playwright Bertolt Brecht proclaimed, General, your tank is a powerful vehicle. It smashes down forests and crushes a hundred men. But it has one defect: it needs a driver.[15] If commoners refused en masse to drive the tank of war, the leaders would be left to fight their own battles. They would be brief.

[3] Dave Grossman, On Killing: The Psychological Cost of Learning to Kill in War and Society (Boston: Little, Brown, 1995).

[14] Theodore Roszak, Mary E. Gomes, and Allen D. Kanner, eds., Ecopsychology: Restoring the Earth Healing the Mind (San Francisco: Sierra Club Books, 1995). Ecopsychology concludes that there can be no personal healing without healing the earth, and that rediscovering our sacred relationship with it, i.e., our intimate earthiness, is indispensable for personal and global healing and mutual respect.