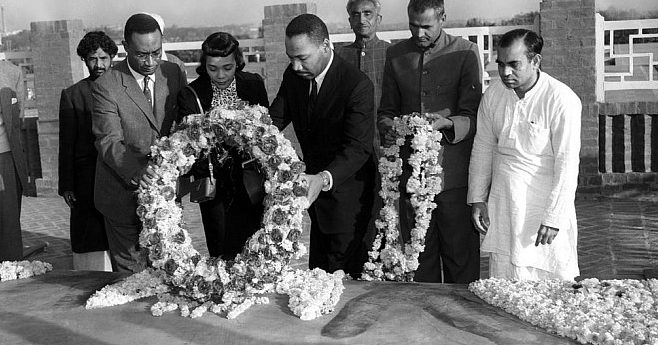 The Influence Of Gandhian Socialism On Du Bois And King

The Influence Of Gandhian Socialism on Du Bois and King

Two great icons of 20th century Black struggle found a valuable resource in Gandhi and his movement for national liberation.

“Du Bois recognized that Gandhi’s greatest gift was his devotion to the study and resolution of the great social evils of poverty, violence, and colonial oppression.”

Mohandas K. Gandhi began agitating for the independence of the Indian people from colonial rule in the early twentieth century. In 1921, he took leadership of the Indian National Congress, leading nationwide campaigns devoted to achievement of swaraj or home rule. In 1930, he opposed the tax imposed on salt by imperial Britain, leading the Dandi Satyagraha or Salt March, an act of civil disobedience aimed at overturning the colonialist economic monopoly over salt, which was a vital resource for the Indian people. In 1942, he impressed upon the British to quit India, an appeal which led to India’s liberation from colonial rule in 1947.

In his essay, “My Trip to the Land Of Gandhi,” Martin Luther King Jr. recounts his voyage to India in April of 1959 which he refers to in his report as “the land of Gandhi.” Arranged by G. Ramachandran , the Secretary Of the Gandhi Smarak Nidhi (Gandhi National Memorial Fund), the trip took Dr. King and his wife, Coretta Scott King, and his friend, Lawrence Reddick, on a five-week tour of India. During the trip, the Kings met with Jawaharlal Nehru, the first Prime Minister of India, and engaged in a deep study of Indian civilization, history, and politics as well as a prolonged consideration of the deep scars and mass devastation left in the wake of colonial rule. For instance, it is estimated that the Bengal famine of 1943, which was a by-product of the wartime policies implemented by the British during the Second World War, led to the mass starvation and death of more than three million Indians.

“The Kings met with Jawaharlal Nehru and engaged in a deep study of Indian civilization, history, and politics.”

In commemoration of his vital contribution to the struggle against imperialism and the color line, the King embassy placed a wreath on Gandhi’s cremation site in Delhi. Gandhi had been assassinated on 30 January 1948 by Nathuram Godse, a cultural nationalist stoked by the flames of national partition and violence. By contrast, Gandhi emphasized tactics of civil disobedience and peaceful non-cooperation to challenge the ruling class and opposed the partition of India into a separate “Hindu” India and “Muslim” Pakistan:he recognized that the true source of oppression was not religion but rather, Western civilization and recommended the unity of Hindu and Muslim Indians against colonial oppression and the independent resolution of internal differences.

“Gandhi emphasized tactics of civil disobedience and peaceful non-cooperation to challenge the ruling class and opposed the partition of India into a separate ‘Hindu’ India and ‘Muslim’ Pakistan.”

Martin Luther King Jr. saw in his leadership of the Indian independence movement a valuable political resource for the struggle of black Americans against white rule and social segregation in the United States. Like Gandhi, love and truth are central forces in King’s political ideology, but he called upon a higher love than romantic or sentimental love, a Love capable of compelling people to sacrifice individual interests in the service of the greater good of the national struggle and the liberation of humanity from the color line. He affirmed that:

“Non-violent resistance does call for love, but it is not a sentimental love. It is a very stern love that would organize itself into collective action to right a wrong by taking on itself suffering. While I understand the reasons why oppressed people often turn to violence in their struggle for freedom, it is my firm belief that the crusade for independence and human dignity that is now reaching a climax in Africa will have a more positive effect on the world, if it is waged along the lines that were first demonstrated in that continent by Gandhi himself.”

Similarly, it was on the basis of the recognition of the common struggle of Indian, African, and African-American peoples against Western civilization that led Du Bois — who was himself foundational to King’s thought — to write to Gandhi in 1929, inquiring after his efforts to win freedom for the Indian people and asserting, with a grace that can only come out of a sincerity wrought by urgency, the necessity of uniting the darker races of humanity against the color line and white rule. In the letter, Du Bois writes:

“I am the Editor of a small magazine, The Crisis, which are the circulation of about 30,000 copies amongst educated American Negroes. I very much want a message from you to these 12 million people who are the grandchildren of slaves.”

“Du Bois is frank about Gandhi’s mistakes during his early years,”

Du Bois, being a prolific scholar and the editor of a major publication — the NAACP’s flagship news service, The Crisis— was well aware that Gandhi began his revolutionary career in South Africa, where he studied and practiced law in addition to experimenting with various political groups. He is frank about Gandhi’s mistakes during his early years, recalling his error in siding with Boers momentarily before aligning with the British during the Boer War, characterizing this phase in his life as “one of those contradictory occurrences which so often faced Gandhi with reality and made him readjust his ethical and religious theories.”

Nevertheless, he underscored that:

“It was no accident that Africa,not Asia, showed Gandhihis way. The old tragic continent was in the closing years of the nineteenth century, the critical center of the triumphant imperialism of expanding Europe. Here with gold, diamonds, and slaves, Europe was collecting the finance capital and gathering the raw material and buying the tools and machinery to forge her chains across the whole world.”

As a sociologist who spent his life advocating the orientation of science and government to solve social problems rather than the accumulation of profit, Du Bois recognized that Gandhi’s greatest gift was his devotion to the study and resolution of the great social evils of poverty, violence, and colonial oppression — forces that hindered the development of the darker races of humanity in the modern epoch. King would echo these sentiments, remarking in his essay that:

“In a real sense, Mahatma Gandhi embodied in his life certain universal principles that are inherent in the moral structure of the universe, and these principles are as inescapable as the law of gravitation.”

The story of Asia’s connection to Africa in antiquity and how the two had been brought into a violent unity by European slavery and colonialism would engross Du Bois his entire life. His novel Dark Princess must be read as a tribute to the struggle of Indians against British rule and the importance of their unity with the movements for black freedom in Africa and America . The World and Africa, his 1946 history of the Afro-Asiatic world, similarly concerns itself with the historical connections between African and Asiatic peoples and civilizations before European dominance. The revolutionary and scientific significance of this anthropological and historical discovery is not to be underestimated because the dominant narrative advanced by the white humanists and social scientists in the Western academy during the nineteenth century portrayed India–and Egypt–as more “European” than Southern Africa owing to the complexity of their civilizations. Du Bois exposed this thesis as a racist myth that did not reflect the truth of Africa and Asia’s linked historical development at all but rather, operated in the defense of white hegemony. Du Bois’s reasons for insisting upon the connections in the historical development of these two continents over time were thus based in his political commitment to charting an anti-imperialist history of human civilization, one which saw the continuities between Pan Africa and Pan Asia over time and emphasized the need for a political science capable of linking the struggles of the darker races for freedom and self-rule.

“The connection between Asia and Africa has always been close. There was probably actual land connection in prehistoric times, and the black race appears in both continents in the earliest records, making it doubtful which continent is the point of origin. Certainly the Negroid people of Asia have played a leading part in her history… The Dravidian Negros laid the basis of Indian culture thousands of years before the Christian era.”