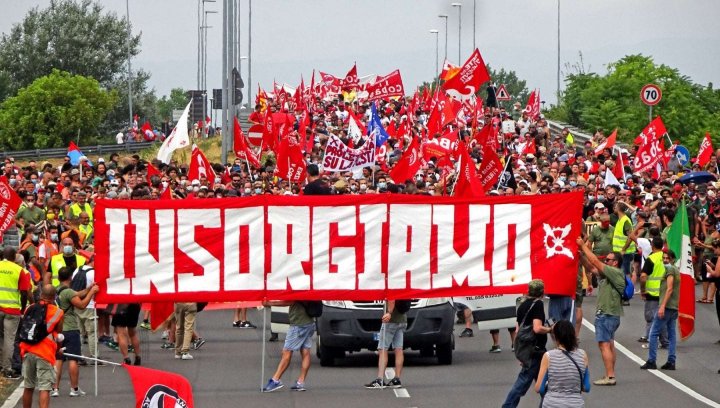 The ‘Insorgiamo!’ Movement In Italy

Take Back A Factory, Organize A City, Fight For Everything.

On Sunday, May 15, a national public assembly organized by the “Insorgiamo!” — “We are Rising up!” — movement will be held in Florence, Italy. The movement began with the struggle against a factory closure and the workers’ efforts to reopen it, and from there has taken up other social demands.

An interesting process of organization and struggle is taking place in Italy. Emerging from the fight to keep jobs in a closing factory and driven by debates in a democratic factory council structure, the “Insorgiamo!” (Let’s rise up!) movement was born. However, it went far beyond its own struggle and picked up the demands of the most neglected sectors of Florence, where the factory is located. This allowed it to carry out mobilizations of 30,000 people in September 2021 and last March 26 and to call for a National Public Assembly to discuss the problems, needs, and demands of the workers and the people on Sunday, May 15.

How did this new political phenomenon start?

It all began with the workers at the GKN factory in Campi Bisenzio, on the outskirts of Florence, defending their jobs. The factory produced axles for automobiles.

Last July 1, after a long period of the pandemic in Italy, the government again gave employers permission to fire workers for “just cause.” This factory’s owner, the British financial fund Melrose, immediately sent an email to all employees in Florence announcing the factory closure. At the same time, it was planning to hire new workers at another factory in northern Italy.

The workers immediately occupied the factory in Florence and began a political campaign for the government to buy and convert the factory, since the production of car axles would be very difficult to restart without government help and reinstating these workers.

The workers have waged this campaign for less than a year. The factory is probably the only one in the entire country to have a classic democratic factory council structure. This is what has made it possible for the factory’s 500 workers to carry on the struggle even with the union bureaucracies against it.

From the beginning, workers from the GKN factory toured the country seeking to coordinate with sectors of workers in struggle, with young people, and with all the left-wing activists they met along the way. And they had two demonstrations in Florence, each with more than 30,000 participants — including many young people.

How has the struggle unfolded? What is the Insorgiamo movement all about?

The struggle of these workers has evolved into more of a political struggle in coordination with other sectors. It’s the more traditional process of class struggle, with demands from these different sectors all converging — and going far beyond the initial demands of the GKN workers.

The movement now brings together a wide range of workers, youth, people from poor neighborhoods, and workers’ and leftist organizations and has taken on the name Insorgiamo!, which means “Let’s rise up!” This term has a long history in Italy, having been used at one of the highest moments of the class struggle during World War II, when Florence was the scene of an insurrection — part of the partisan resistance from 1943 to 1945 against fascism and Nazi occupation.

So, the very choice of this name for the movement points quite clearly to its aim: to build a struggle on the political terrain of opposition to the ruling class, its parties, and the social system they maintain, and not simply some “resistance” against the continual economic attacks on the working class.

This movement has called for a National Public Assembly on Sunday, May 15, to discuss the demands of the exploited and how to fight for them.

What challenges does this movement face?

The movement has been successful and has been making advances, but as I see it, what is required now is to take a qualitative leap – one that will help to change the balance of power even more than what the GKN workers have accomplished so far. The movement must spell out some concrete objectives in terms of demands and organization that will make it possible to carry forward a common political struggle that goes beyond the initial momentum of the GKN workers, and that aims much higher than a merely reindustrializing a single factory — which has yet to be achieved.

Simply put, the movement needs a program of struggle on which it can build and attract new sectors.

What demands are being raised in La Voce delle Lotte and by the Revolutionary Internationalist Fraction?

We know that Sunday’s assembly will not be the end point, but rather is a first step that will be followed by discussions, other assemblies, and democratic decision making.

Our fight as the FIR is to help the Insorgiamo! movement, as it evolves, lead to a broader formation in Italy that stands on the basis of class independence. That is, a movement that confronts the trade union bureaucracies — which stand against our interests — and the populist right wing that is surpassing the various social-liberal politicians who, over the past 30 years, have been the guardians of the neoliberal attacks on the workers and the Italian people as a whole.

We must not forget that as next year’s elections approach, the pressure to use our struggles and our movement for purely electoral purposes — invoking the “lesser evil” and “reasonable, realistic” leftist solutions — is only going to increase. That’s why it is so fundamental today to have “urgency” over developing a plan of struggle and a political perspective against this pressure.

We’re proposing four basic points to fight against the government of Prime Minister Mario Draghi and against the bankers and industrialists for whom he is the mouthpiece, as well as against the militarist escalation around the war in Ukraine. That requires a program of the working class and oppressed, even if we lack the relationship of forces to win such a program. It must point the way out of the capitalist crisis, its wars and environmental devastation, and stand on the side of the working class and the great majority of the population.

The challenge raised by the GKN factory collective must be met. As they have written, we all have a duty to commit ourselves so that the movement evolves, after the mobilizations and the successes of this last year, which are still small compared to the challenges and tasks that our era poses to us.