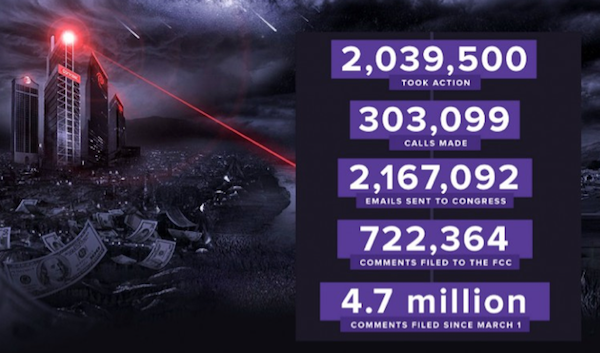 The Internet Slowdown surpassed all of our (already high) expectations.

It drove more than 2 million emails and nearly 300,000 calls (averaging 1,000 per minute) to Congress. On top of that so many pro-Net Neutrality comments were filed (722,364 to be exact) that the FCC’s site broke (again). Politicians in both the House and Senate got in on the action, major websites spread the word, and by midday it was impossible to keep up with the #NetNeutrality traffic on Twitter.

As huge as the slowdown was, it was just the beginning.

Here’s a sneak peek at what’s up next:

▪ Final deadline for comments to the FCC. It’s coming up on Monday … so submit your comment if you haven’t already and tell all your friends to do the same.

▪ Save the Internet lunchtime rallies in New York City and Philly. Live nearby? Join us this Monday at 12:30 p.m.

▪ Net Neutrality Action at the FCC. Thousands across the country have called for public hearings on Net Neutrality. On Sept. 16, we’ll bring that message right to the FCC’s doorstep.

▪ FCC Open Internet Roundtables. We’ll spread the truth about Title II at these official FCC events. You can catch Free Press Policy Director Matt Wood at 10 a.m. on Sept. 16. Stream it here and use #FCCRoundtables on Twitter to ask questions.

We’re so glad to have you with us in this fight.