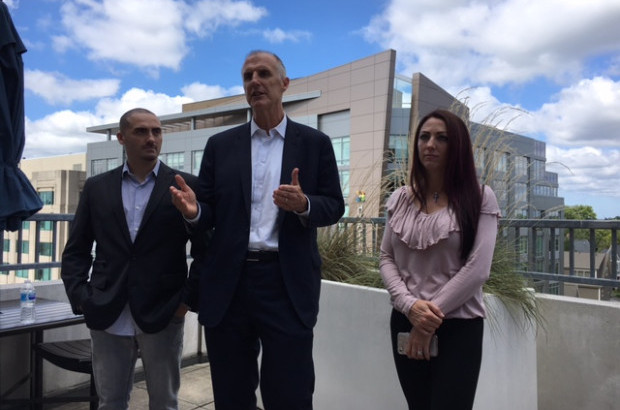 ‘The Justice System In Its Current Form Destroys Families’

A year ago, Weldon Angelos was released from prison after serving nearly 13 years of a 55-year sentence. Today, he’s leading the movement for criminal justice reform in the United States.

Weldon’s story about facing over-criminalization and injustice is well-known. He was arrested for selling marijuana while in possession of a firearm and received an extraordinarily long punishment for a first-time, non-violent offender.

Since his release, Weldon has worked tirelessly to reconnect with his family – his sister, his nephew, and his fiancée and two sons – while fighting to fix our broken criminal justice system.

“I’m incredibly grateful to be out, but I’m going to continue to push for reforming mandatory minimum sentencing because it destroys so many families,” Weldon declared in an interview last year. “I witnessed that first-hand in prison. There are other people like me, even more deserving than me, that should be out.”

Generation Opportunity caught up with Weldon during a recent trip to Washington, D.C., where he shared his story with lawmakers and urged them to make criminal justice reform a top priority. Weldon took a few minutes to talk to Gen Opp about adjusting to life after prison and what he considers the most important elements of criminal justice reform.

GO: You were released after serving more than 12 years. What were those years like in prison?

WA: It was a traumatic experience. Prison is not a nice place to be. It’s violent.

The most hurtful part for me was not being with my family. Not seeing my kids grow up.

I missed everything. I missed their proms, their drivers’ licenses, their first going into high school. I missed all that.

And as I’m in prison, I’m seeing my sons grow up in pictures, and I’m not with them. That was the worst part of my experience.

GO: What have you been up to since your release?

I’m working on my documentary and a book. I also just got a new job opportunity, which I’m excited about.

GO: That’s great! Tell us about that opportunity.

WA: I’ll be up in North Dakota working in oil fracking. It’s a well-paying job.

GO: Tell us about your documentary.

WA: It’s an expose of the justice system based on my case. It’s called Unlikely Allies.

We’ve brought everyone together – you guys, Snoop Dogg, Kevin Garnett, Sen. Mike Lee and Sen. Cory Booker – just trying to get the message out there that in order to get this done we have to work together.

I got out because everyone worked together. That’s how we’re going to make the system better and make some change.

GO: What else needs to happen to reform our criminal justice system?

We also need to give discretion back to judges. In my case, if the judge had discretion, he could’ve given me a sentence as low as five or six years. That would’ve done the exact same thing as a 55-year sentence. It would’ve transformed my thinking in the same way – it doesn’t take 55 years. You can do that in five years, or even two.

On the back end, people need support. I was lucky to have a support network, but I didn’t really know how to deal with being out.

GO: What’s the main message you want people to learn from your story?

WA: The justice system in its current form destroys families.

Interested in hearing more about Weldon’s story? Watch our Facebook Live with Weldon and his sister Lisa talking about criminal justice reform and what they are doing to change the system for the better.

Want to add your voice to the growing movement for criminal justice reform? Click here to sign our petition to Congress.