The Largest Protests In US History Are Happening Now

Above Photo: Protesters at the  March for Our Lives Rally on March 24, 2018 in Washington, DC. SHARON FINNEY/GETTY IMAGES

As the article below notes there are many reasons that protests in the United States are large right now. We have written that the 2020s will be a decade of transformation where people demand economic, racial and environmental justice as well as peace. Many issues that the government has ignored or mishandled are becoming crisis issues that cannot be ignored, the protest movement which had its take-off with Occupy in 2011 is growing and because people are reaching consensus that change is needed.

Some of the protests in this article have been made larger because the Democratic Party and its so-called ‘resistance’ is encouraging and Democratic donors are funding them. The same type of activity occurred during the George W. Bush administration around the Iraq War. While the Democrats are encouraging some of these protests for their own partisan reasons people participating care about these issues. The Democratic Party when it is in power will be expected to put in place policies that create change. If they fail to do so, as they almost always do, people will still want change and will demand it. Occupy, Black Lives Matter, Fight for $15, debt resistance, protests against pipelines and improved Medicare for all advocacy and more all increased under President Obama when he failed to deliver the change people demanded. The Democrats should be prepared to expect the same when they fail to satisfy the demand for change. KZ

We Should Expect the Protests to Get Bigger

Size matters — at least when it comes to the size of our protests.Though final count is still being tabulated, researchers Erica Chenoweth and Jeremy Pressman of the Crowd Counting Consortium estimate that over 1.25 million people across the United States participated in Saturday’s March for Our Lives protest, making it one of the largest youth-led protests in American history, at least since the Vietnam War.Beyond youth-led protests, March for Our Lives is also poised to become one of the biggest protests, period, in American history, surpassed only by the Women’s March in 2017, where an estimated 4.15 million people participated, and the Women’s March in 2018, where anywhere from 1.6 to 2.5 million people participated domestically.

These numbers aren’t an accident. A combustible array of variables, including the rise in authoritarianism and anti-authoritarianism worldwide and technology that makes it easier to organize sibling marches, have contributed to historic turnouts.

The counts are already huge. Now get ready for them to explode.

It’s important to emphasize that measuring protest size is an imprecise art. Estimates of Saturday’s Washington D.C. protest have ranged anywhere from 202,000 from Digital Design and Imaging Service, which uses drones to collect aerial data, to over 800,000 from organizers themselves, who collect RSVPs and data about public transportation usage. While the public tends to distrust data that comes from organizers, Chenoweth cautions that organizers are often more transparent about their data collection methods.

“I actually think the conservative estimate here is really quite conservative,” Chenoweth says. “The drones are doing snapshots at given moments in time, but they’re limited by their bird’s-eye view of buildings, or different obstructions, especially when people are moving.”

To arrive at their estimate (which is still being updated), Pressman and Chenoweth take a 10 percent deduction of the highest estimated count, provide a 10 percent boost to the lowest estimate, and then average the two. Using this method, their best guess for Saturday’s turnout in D.C. hovers around 471,000. 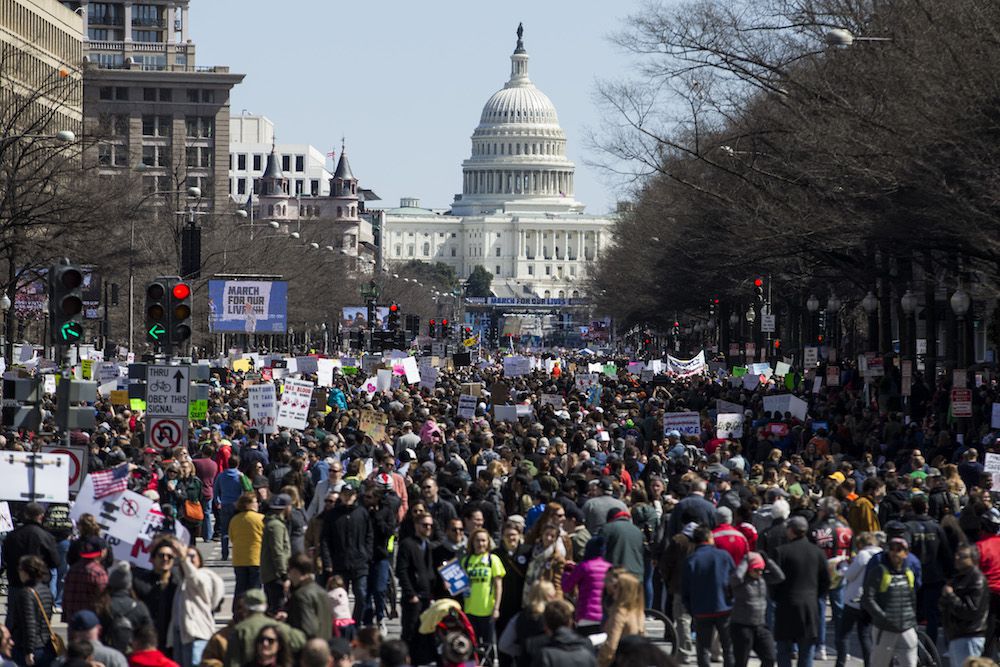 Even with such a wide range, these estimates are jaw-dropping — and reflect our current political moment. Of the top five largest protests in American history, four have taken place in the last two years — the two Women’s Marches, the March for Our Lives, and the March for Science, estimated to have a turnout of around 1 million. Only the 1993 March for Lesbian, Gay and Bi Equal Rights and Liberation  and the 1982 Nuclear Weapon March in New York City, which both had turnouts in the 800,000 to 1 million person range, come close. Anti-Vietnam War protests were more numerous and over a much longer period of time, with the largest one on record attracting over 500,000 people. 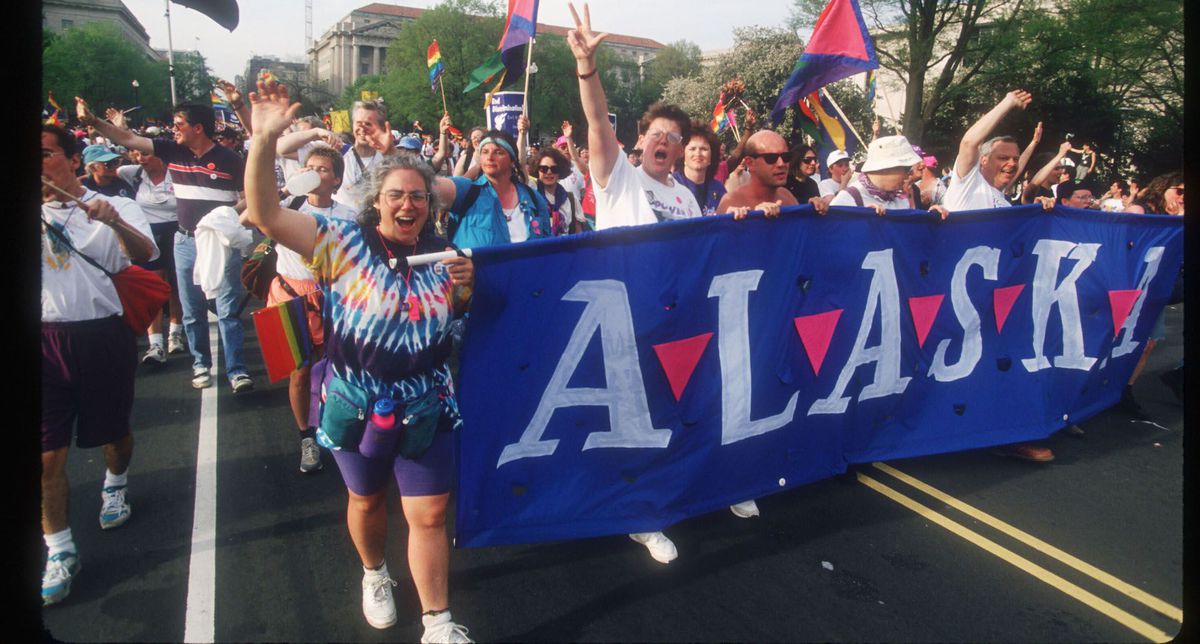 The March for Lesbian, Gay and Bi Equal Rights and Liberation in 1993.
IMAGE: PORTER GIFFORD/LIASON/GETTY IMAGES

According to Chenoweth and Pressman, there were 521 March for Our Lives events nationally though just 27 internationally, significantly less than the Women’s March, who had 261 international marches their first year. To be fair, the United States has some of the least restrictive gun control in the Western world — see here for a depressing comparison.

Turnouts have been so historic partially because of the depth of anti-Trump despair. Trump’s popularity rating after his first year in office was the lowest for any president in modern American history. The legislative branch that is supposed to provide a check and balance to his power has only amplified it. At Crowd Counting, Chenoweth and Pressman group recent protests into three categories, pro-Trump, anti-Trump, and neither. Chenoweth estimates that the “overwhelming majority of protests in this country, 80 percent, have been anti-Trump.”

There is probably no better organizer in this country than Donald Trump, even if it’s just organizing people against him.

Trump can’t take all the credit. Other factors contributed to the exponential growth in protest size, including an increasing reliance on Facebook, Twitter, and other social media tools that make mass organizing both desirable and easily replicable.

Researchers have found that organic protest movements are able to rise out of Facebook and Twitter without much assistance from television or traditional news networks. Facebook makes it easier for connections to form, especially temporary political relationships.

It’s part of the reason why many organizers have been hesitant to leave the platform, despite serious privacy concerns and the company’s role in helping spread anti-Rohingya Muslim propaganda in Myanmar, where the persecuted group faces ethnic cleansing.

Still, technology explains the mechanics of viral social movements, not their ethics or their origin stories. Facebook and Twitter can’t create a social movement out of thin air. The companies can’t teach young activists to be good, impactful intersectional activists. That has to come from history, including recent social movements.

“There’s a lot of increased capacity for organizing because of the experiences of the past ten years,” Chenoweth says. “Black Lives Matter itself gave young people a lesson on how you do this. Before Black Lives Matter there was Occupy, since then we’ve had the Dreamers, the Women’s March, and Muslim Ban protests in airports … My guess is these kids did their first activism with their moms. It’s a quicker learning curve for kids.”

With each march, it’s as if organizers are compiling a social protest toolkit or bible, which the next march leaders can tap. Increasingly, for example, organizers have focused on making their marches intersectional, putting women, people of color, young people, and people from diverse religious backgrounds at the front and center of their speaker lineups and leadership. The official platform for the Women’s March on Washington placed not just women’s rights, but Native American rights and Black Lives Matter at the front and center of the platform.

Parkland survivor and activist David Hogg has implored fellow organizers to use their white privilege to make sure all people affected by gun violence — especially people of color — are heard. This principle isn’t exactly new to social movement organizing, but as anyone who participated in the largely white Occupy protests remembers, not consistently practiced historically.

Perhaps protests have included so many people in the past two years because — get ready for it — they’ve made inclusion a central operating principle.

The feeling isn’t just mutual. It’s global. As Chenoweth notes, both authoritarianism and anti-authoritarian protests have been on the rise in recent years. Researchers have noted a substantive global increase in authoritarian populist candidates in the West in the past two decades. Citizens in 94 countries now live in non-democratic regimes, including 53 percent of the world’s people, according to the Human Rights Foundation. Authoritarianism has arrived in Turkey as well as Venezuela, and its continued its slow, not-quite-unprecedented crawl in the States. 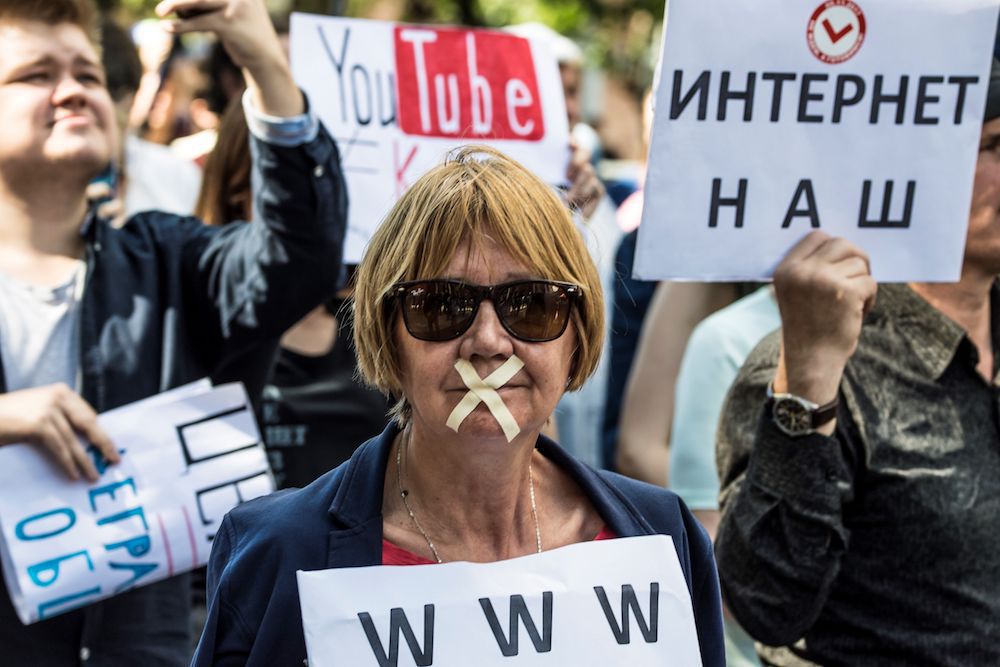 A Russian protester at the March for Free Internet in central Moscow on July 23, 2017.
IMAGE: MLADEN ANTONOVAAFP/GETTY IMAGES

As dictatorships have solidified their hold, so, too, have resistance movements globally.

“What we’re seeing in the United States is symptomatic of what we see around the world,” Chenoweth, who also collects data about mass movements worldwide, notes. “[Between] resistance against authoritarianism, colonial and foreign and military occupation … we’ve had more mass movements in this decade in any decade since 1900.”

That’s a spectacular, life-affirming fact. And something that should give organizers, living off leaks of the Russian investigation, special elections and Stormy Daniels’ Twitter feed — something worth holding onto.

Trump isn’t going away anytime soon, and Trumpism won’t end after he finally leaves office. Better to keep building, day by day, viral video after viral video, one explosive protest at a time.