The Last Smash And Grab At The Federal Communications Commission

By Ernesto Falcon, EFF.
October 28, 2020
| Educate!
The Last Smash And Grab At The Federal Communications Commission2020-10-282020-10-28https://popularresistance-uploads.s3.amazonaws.com/uploads/2017/12/popres-shorter.pngPopularResistance.Orghttps://popularresistance-uploads.s3.amazonaws.com/uploads/2020/10/fcc-forbearance_banner-f.jpg200px200px

NOTE: Popular Resistance views internet access as a public good, something that everyone needs like electricity and water. This is best achieved through publicly-provided universal high speed internet.  – MF

AT&T and Verizon secured arguably one of the biggest regulatory benefits from the Federal Communications Commission (FCC) with the agency ending the last remnants of telecom competition law. In return for this massive gift from the federal government, they will give the public absolutely nothing.

A Little Bit of Telecom History

When the Department of Justice successfully broke up the AT&T monopoly into regional companies, it needed Congress to pass a law to open up the regional companies (known as Incumbent Local Exchange Carriers or ILECs) to competition. To do that, the Congress passed the Telecommunications Act of 1996 that established bedrock competition law and reaffirmed non-discrimination policies that net neutrality is based on.  The law Congress created a new industry that would interoperate with the ILECs. These companies were called Competitive Local Exchange Carriers (CLECs) and already existed locally at the time as many were selling early day Internet access via dialup over the AT&T telephone lines along with local phone services. As broadband came to market, CLECs used the copper wires of ILECs to sell competitive DSL services. In the early years the policy worked and competition sprung forth with 1,000s of new companies existing along with a massive new competition based investment in the telecom sector in general (see chart below). 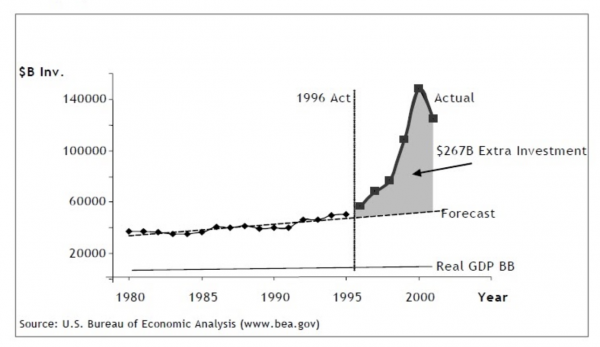 Source: Data assembled by the California Public Utilities Commission in 2005.

Congress intervened to create the competitive market through the FCC, but at the same time gave the FCC the keys (through a process called “forbearance”) to eliminate the regulatory interventions should competition take root on its own. The FCC started to apply forbearance just a short number of years after the passage of the ‘96 Act with arguably one of the most significant decisions in 2005 when fiber wires being deployed by ILECs did not have to be shared with CLECs like copper wires with the entry of Verizon FiOS. Many states followed course though with notable resistance because it was questionable whether future networks did not need strong competition policy to ensure the goals of affordability and universality could be met with market forces alone. One California Public Utilities Commissioner expressed concern that “within a few years there may not be any ZIP codes left in California with more than five or six providers.”

The ILECs today, essentially AT&T and Verizon, no longer deploy fiber broadband and have abandoned competition with cable companies to pursue wireless services. Without access to fiber, CLECs began to deploy their own fiber networks that were financed from their revenues they gained from copper DSL customers, even in rural markets. But for the last two years AT&T and Verizon have been trying to put a stop to that by asking the FCC to use its forbearance power to eliminate copper sharing as well, which they achieved today. Worst yet, AT&T is already positioning itself to abandon DSL copper lines rather than upgrade them to fiber in markets across the country leaving people with a cable monopoly or undependable cell phone service for Internet. In other words, the FCC will effectively make the digital divide worse for 100,000s of Americans by today’s decision.

Broadband competition has been on a long slow decline for well over a decade after the FCC’s 2005 decision. In the years that followed the industry rapidly consolidated with smaller companies being snuffed out or closing shop. Virtually every single prediction the FCC made about the market in 2005 have failed to pan out and the end result is a huge number of Americans now face regional monopolies as their need for high-speed access has grown dramatically during the pandemic. It is time to rethink the approach, but today we got a double down.

The decline of competition didn’t happen exclusively at the hands of the current FCC, but the signs of the regional monopolization were obvious at the start of 2017 when the agency decided to abandon its authority over the industry and repeal net neutrality rules. Approving today’s AT&T/Verizon petition to end the 1996’s final remnants of competition policy, rather than improving and modernizing them to promote high-speed access competition, the FCC has decided that big ISPs know best. But we see what is going to happen next. AT&T will work hard to eliminate any small competitors on their copper lines because doing so impairs their ability to replace them with fiber. All that while they themselves will not provide the fiber replacement resulting in a worsening of the digital divide worse across the country. The right policy would make sure every American gets a fiber line rather than disconnected. None of this has to happen though and EFF will work hard in the states and in DC to bring back competition in broadband access.