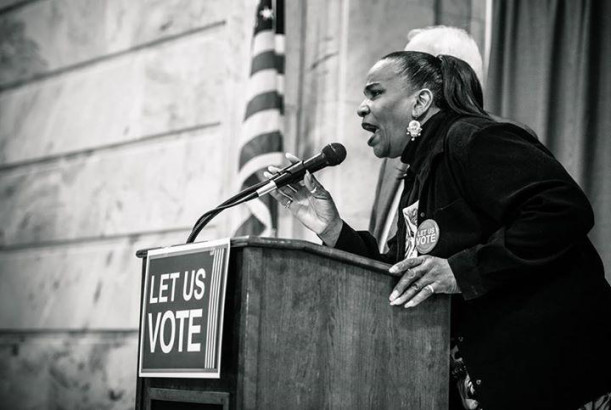 The Latest Challenges To The South’s Felony Disenfranchisement Laws

While all Southern states have laws disenfranchising people while they are incarcerated and on probation or parole, Florida stands out with one of the nation’s most restrictive felony disenfranchisement laws — one of only four states that impose a lifetime ban on voting for anyone convicted of a felony. The others are Virginia, Kentucky and Iowa.

Because of the law, there are currently nearly 1.7 million Floridians — the highest number in any state — that have permanently lost the right to vote, according to a 2016 report by The Sentencing Project. Florida accounts for 27 percent of the national population of people disenfranchised due to felony convictions, and the 1.5 million Floridians who have completed their sentences but remain without voting rights make up 48 percent of the national total.

But they could get that right back thanks to a ballot initiative now underway to amend the state constitution and allow people with felony convictions to vote once they complete their sentences, including probation or parole.

This spring, the Florida Supreme Court approved the language for the initiative, which was drafted by Floridians for a Fair Democracy, a coalition of nonpartisan civic and faith organizations. But for the amendment to appear on the ballot next November, its supporters need to collect and submit over 700,000 signatures to county elections supervisors, who will need to verify them by Feb. 1.

That’s a huge number of signatures to collect in a relatively short time. But Desmond Meade, president of the Florida Rights Restoration Coalition(FRRC) that’s leading the collection effort, said he and his fellow activists are encouraged by the grassroots support the ballot initiative has already gotten, even without an organized campaign.

“The first 100,000 signatures that we did collect was pure volunteer effort,” he said.

Now, FRRC and allied organizations across the state hope to capitalize on that grassroots energy. They will convene next week to kick off their organized signature-collecting efforts, which include a public education campaign and a door-to-door canvassing drive. If they manage to get the initiative on the ballot, Meade says internal polling shows it has a strong chance of passing. It needs 60 percent of the vote to become law.

“When people realize the current policies that we have,” Meade said, “they immediately know it’s not fair.”

Meanwhile in Louisiana, the New Orleans-based nonprofit Voice of the Experienced (VOTE, formerly Voice of the Ex-Offender) is preparing to appeal a court ruling that upheld two state laws disenfranchising people with felony convictions even while they are out of prison and on probation or parole. Filed last year, the group’s lawsuit contends that the state constitution’s felony disenfranchisement provision intends to prevent only incarcerated individuals from voting — not those on probation or parole.

The state currently disenfranchises 108,000 people in total under its felony disenfranchisement laws — a number that would drop dramatically if VOTE’s appeal succeeds. The group estimates that about 70,000 Louisianans who are currently on probation and parole would regain the right to vote if the two laws, passed in the 1970s, are repealed.

VOTE lost its initial case in state district court. But the judge, Tim Kelley, was sympathetic, saying he disagreed with the law but had to uphold it.

VOTE is undertaking its appeal with legal help from The Advancement Project, a national civil rights advocacy group. Bruce Reilly, VOTE’s deputy director and one of the plaintiffs in the case, is optimistic about their chances, observing that the state “didn’t seem to be lawyering at a very high caliber.”

And, he added, winning the appeal isn’t his group’s only goal. They also want to change the public consciousness about the issue.

The racist history of felony disenfranchisement

The Florida ballot initiative and Louisiana court case are the latest battles in the long war to overturn felony disenfranchisement laws. According to The Sentencing Project, over 4.5 million Southerners are currently disenfranchised due to these laws.

The laws, which have origins in white-supremacist politics, disproportionately disenfranchise African Americans.

During Reconstruction, each ex-Confederate state was required to hold a constitutional convention and write a new state constitution. They were expected to eliminate Black Codes — statutes enacted after the Civil War that restricted the rights and civil liberties of Black residents — and extend the franchise to newly emancipated slaves.

But when Florida held its convention in 1868, it included a provision barring anyone with a criminal conviction from voting. This was done for the specific purpose of disenfranchising as many emancipated slaves as possible, according to Ari Berman in his book on voting rights, “Give Us the Ballot.”

“During slavery, blacks were far more likely to be arrested than whites, for crimes such as looking at a white woman,” writes Berman. With emancipated Black people already criminalized at higher rates than white people, disenfranchising people with felony convictions was the next step toward suppressing the Black vote.

The Reconstruction-era provision has persisted through the various revisions of Florida’s constitution into the present day. And Florida wasn’t alone: After the Civil War, every Southern state had a law or constitutional provision in place barring citizens with felony convictions from voting. Some prohibited people convicted of specific crimes from voting. Others implemented blanket bans on those convicted of felonies.

In Alabama and Virginia, the provisions were inserted as part of turn-of-the-20th-century constitutional conventions that rewrote Reconstruction-era constitutions to cement the political rule of the white-supremacist Democratic Party. The purpose of Alabama’s new constitution was, as the president of the convention put it, “to establish white supremacy in this state.” One of the Virginia delegates said that his aim was to “disenfranchise every negro that I could disenfranchise under the Constitution of the United States.”

While the Voting Rights Act of 1965 put an end to poll taxes and literacy tests, it left felony disfranchisement laws untouched. Today, their severity variessignificantly by state.

And though the white-supremacist origins of felony disenfranchisement laws may have been largely forgotten, their racially disparate effects have persisted.

Of the 6.1 million people nationwide currently disenfranchised because of felony convictions, 4.5 million or 74 percent live in the South. And nearly 1.8 million, or 39 percent, of those are Black — almost 8 percent of the South’s total Black population.

But Meade of FRRC points out that felony disenfranchisement is not just an African-American issue. “The reality is that you have three times as many people who are not African-American who are directly impacted,” he said. “So while it disproportionately impacts the African-American community, we don’t lose sight of the fact that this policy has managed to transcend racial lines.”

Groups across the South have been fighting felony disenfranchisement laws for decades and are making progress in some states. In Alabama, where the constitution bars voting by people convicted of “crimes of moral turpitude,” that ambiguous phrase was defined earlier this year after pressure by the Campaign Legal Center and other groups, potentially restoring voting rights to thousands of people. And in Virginia, where state law permanently disenfranchises people with felony convictions unless the governor intervenes, Gov. Terry McAuliffe (D) has used the power of his office to personally re-enfranchise 156,000 people.

But in other states the movement has experienced setbacks. In 2014, for example, former Kentucky Gov. Steve Beshear, a Democrat, issued an executive order that would have restored voting rights to most people convicted of felonies after they had completed their sentences. It was immediately revoked by his Republican successor, Matt Bevin.

“The fight’s gotten more difficult,” said Shelton McElroy with Kentuckians for the Commonwealth, a statewide grassroots organization that has been organizing around the issue. “Our House is red, our governor is red.”

Still, Meade of FRRC is optimistic about the chances for success in Florida. He attributes the broad support he sees among the public across racial and partisan lines to the grassroots campaign’s appeal to American ideals.

“At the end of the day we’re talking about an issue that really is based on fairness,” he said. “All Americans should be able to participate in the democratic process.”