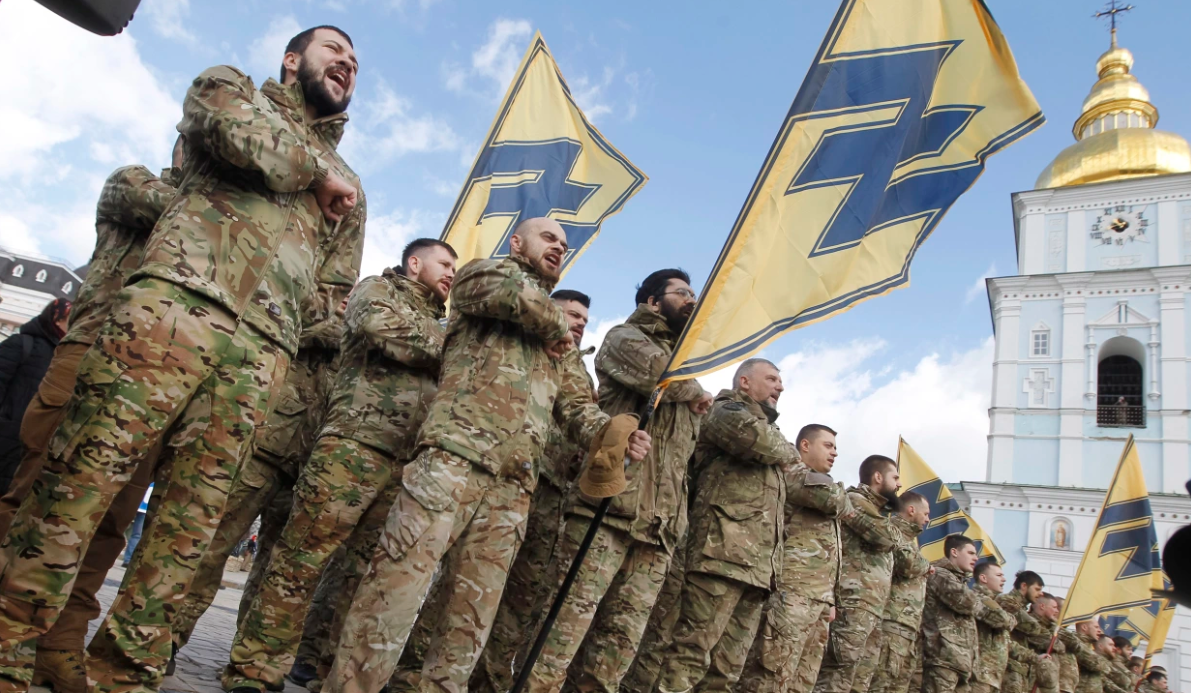 The Levers Of Power Are Also Triggers

Above photo: Ukrainian veterans of the Azov Battalion, formed by a white supremacist, attend a rally in Kyiv on March 14, 2020. Vladimir Sindeyeve / NurPhoto via Getty Images.

The gruesome atrocities, posted on social media by groups like the Nazi Azov Regiment and the Georgian Militia, are a direct result of the UK and US pushing for more militarism in Ukraine, endorsing hostility towards Russians and extending the conflict by pouring the arms into the hands of these very groups.

The  long standing US/UK/NATO project of destabilising the region with the purpose of bringing down the Russian state has actually brought about conditions in which these horrific incidents can occur.

I see clearly that no-one can support the West in the Ukraine conflict without supporting the war there and the ghastly consequences of that war.  It is not good enough for liberals and so called socialists to bleat the “aid” mantra when part of that package is “lethal aid”!

The deliberate strategy of the US and its allies from the outset, manifest in the declared intentions coming from the American and British protagonists’ own mouths, and going right back to Hilary Clinton, Brzezinski, and Carter, is of long duration.  The plans were there from the beginning; and now the pouring of “lethal aid” into the country and the arming and training of insurgent and Nazi militias has borne ghastly fruit.

Biden’s restatement of the Plan in his recent regime change speech in Poland, “for God’s sake, this man cannot remain in power!”,  was endorsed by British Prime Minister Johnson in the Commons just days ago when he agreed with the comment of Johnny Mercer, Tory former minister, in “consigning Vladimir Putin to the dustbin of history where he belongs”.

France and Germany, although still supporting the blatant militarism of the US and U.K., have appeared somewhat more open to the avenue of diplomacy.  They have been targeted by the Polish government for being “too soft”.  The Polish Deputy Prime Minister Jaroslaw Kaczynski, said  “Germany, like France, has a strong bias in Moscow’s favour”. (Die Welt).  He added that “Poland is not pleased with Germany’s role in Europe”.

Kyiv’s best interests naturally are those which coincide with the US and UK faction in the NATO alliance.

Tisdall’s suggestion that the West’s anti-Russian momentum is stalling is significant and, from my perspective, hopeful.  Although Tisdall clearly doesn’t like it, comparing Putin “the deluded, paranoid war criminal” with the “motley crew” of “unreliable western politicians”.

As for going back to the 2014 CIA instigated far-right coup and a now 8-year civil war, as one Twitter comment put it “Airbrushing that out of the story, as Western media does, amounts to deliberate deception”.

The CIA links to and training programme of the neo-Nazi militias in Ukraine stretch back as long, according to the study completed in 2021 by the George Washington University IERES Occasional Papers, no. 11, September 2021 Transnational History of the Far Right Series, republished here  https://www.illiberalism.org/far-right-group-made-its-home-in-ukraines-major-western-military-training-hub/

The US and CIA were not alone.  In the study the role of countries like the UK, Canada and France in the military training of far right extremist groups and individuals, such as the Ukrainian cross-regiment officer group Centuria, is exposed.

Those who claim human rights as grounds of their acceptance of the US/UK/NATO narrative need now to examine their de facto endorsement of Ukrainian Nazis and these horrific actions that have come to light in recent days.

Shocking videos of tortures and murders of Russian prisoners of war by Ukrainian nationalist militants surfacing on social media have staggeringly undermined the grandstanding on war crimes by Kiev’s “Western partners” who are now exposed as culpable supporters, armourers and trainers of these very murderers.

Ukrainian fascists themselves are posting their atrocities on social media; the ostensible purpose is obscene self-glorification and to sow terror. They also testify inadvertently to admissions of egregious violations of the Geneva Convention, which has resulted in some nervousness on the part of the Ukrainian government; and no doubt measures will be taken to stem the flow in a damage limitation exercise.

War crime – Ukrainian soldier executes wounded Russian on camera. Other dead Russian soldiers appear to have had their throats slit. One has his hands tied behind his back. pic.twitter.com/xZGWXb7KfC

However, it is ultimately fortunate, albeit shockingly so, that governments may control mainline media but cannot control the internet nor keep the monsters from damning themselves on it .