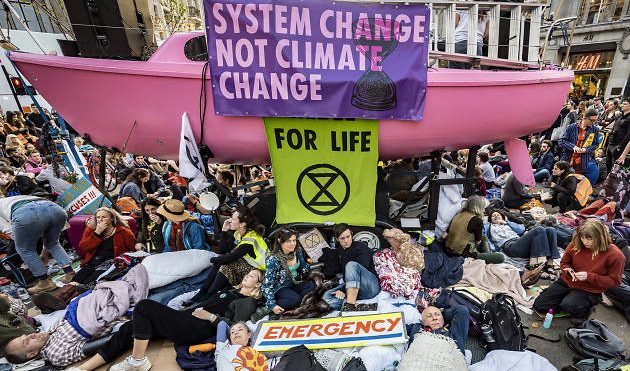 The Liberal Class Is Complicit In Mass Murder

Above photo: By Vladimir Morozov.

There is an out-of-fashion quote that goes something along the lines of: “For Evil to flourish good people need only to do nothing.” The notion of “evil” has been banished from the supposedly sophisticated discourse of the “woke” liberal classes. But for 99% of human history, evil was very much a material reality, namely the grotesque arbitrary power of the rich to rape, starve and murder. The modern evil is the plan by the corporate elite and their political administrators to willingly, in the full knowledge of the science, engage in putting greenhouse gases into the air to the point of locking in what is euphemistically called social collapse, namely that old trinity of rape, starvation and murder, on the scale of billions of people.

A recent paper outlined that one billion people would be forced to migrate (that means three things, see above) at 2C average global temperature rise*. And if you haven’t been paying attention, that is now effectively locked in within 20 years, give or take a decade or so, unless there is emergency action to slash carbon emissions. This is not alarmism, it’s the real world. Evil is always with us. There are always people committing monstrous crimes in order to express their disdain for life through a pathological desire for power.

The “good people” are supposed to be the liberal class, the professionals and administrators, the educated strata of society, who have the agency, the power and ability to stand up for civilisation.

So,where are they at this most critical point in the history of humanity when over the next decade, we are set to lock in the most despicable scheme to destroy a thousand years of social progress and condemn the next generation into a hell hole of endless and indescribable suffering? They are nowhere to be seen. As co-founder of Extinction Rebellion, I have spent two years asking nicely, waiting patiently for the NGOs, political parties, trade  unions, churches, and professions to step up from their business-as-usual mode of organising emailing, lobbying and occasional tame marches.

What is now needed is bleeding obvious: mass participation in civil disobedience, escalating to a point of bringing the carbon death project to a halt. After all, this would certainly be happening if those already dying were in the home counties rather than in Africa. Black lives do not matter to those liberal classes as if we ever needed reminding. The Extinction Rebellion plan as I conceived it was that by this point, the educated classes would have done the maths and worked out we are going to hell unless we rebel. Our ask to civil society organisations was not complicated: leaders would go on a tour to speak to the nation, emails would be sent to the millions on their databases, informing them of how to engage in civil disobedience. Their vast organisational infrastructures would move into gear to coordinate the simple act of sitting in the roads.

What did we get? Greenpeace refused to send an email. Christian Aid was going to think about it. Charities were going to put it on the agenda for board meetings. The supposed “radical” mayors of Hackney and Newcastle rubbed their chins. The result: nothing. One year on from Parliament acknowledging the reality of the biggest genocide project of all time, the “climate emergency”, all we have is inertia, procrastination, and outright opposition to anything resembling civil resistance. The Labour Party reverting to type plans to drop its commitment to zero emissions by 2030. The Green Party, bless them, only discovered the climate emergency once Extinction Rebellion appeared and since then have done nothing other than talk about it. Dozens of councils have declared an emergency and then promptly put their motions in a drawer and carried on as normal. Why? Because the liberal class has no guts.

The days of standing up to tyranny have long faded. The life-and-death struggle against Hitler and fascism is consigned to the history books. Today’s liberal classes believe only in one thing: maintaining their privilege. Their one priority is power. The number one rule is: preserve our careers, our institutions at all cost. The historical rule number one of fighting evil is the willingness to lose your career and to risk the closing down of your institution. The prospect of death and destruction is lost in a postmodernist haze. Leadership has decayed into sitting behind a desk, following public relations protocols (otherwise known as lying). Leading from the front, the first to go to prison Martin Luther King-style died with the passing of the World War II generation.

The game is up. The old alliance with the liberal classes is dead. New forms of revolutionary initiative and leadership are rising up. Members of the new political party Burning Pink have thrown paint at the doors of the NGOs and political parties calling for open dialogue and public debate. The response, true to form, has been a lethal and deafening silence. We are now in prison from where I write this article after a Green Party member recorded a zoom call and passed it to the police. We have not been let out for exercise for the first five days. We have no kettle, no pillows, no visits. But we don’t give a shit. We are doing something about Evil.

Shortly after the April Rebellion in 2019, I met John Sauven, chief executive of Greenpeace. He congratulated me on XR’s success. He said he would have got arrested but he didn’t because he had a cold coming on. The next generation have their annihilation coming on. They don’t want to be offered cake!

*The New York Times: “The window for action is closing. The world can now expect that with every degree of temperature increase, roughly a billion people will be pushed outside the zone in which humans have lived for thousands of years.”

Foresight: “UN forecasts estimate that there could be anywhere between 25 million and 1 billion environmental migrants by 2050.”

UN Environmental Migration Portal: “How many people will be moving as a result of climate change and other environmental factors? There is great uncertainty about the figures. Forecasts for the number of environmental migrants by 2050 vary by a factor of 40 (between 25 million and 1 billion).”