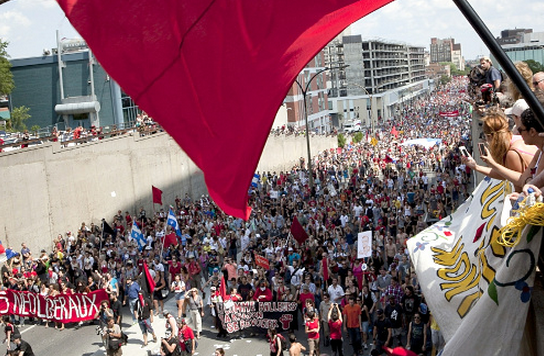 The “Longue Durée” Of The Québec Spring

As has been the case for several years, great mobilizations take place around the globe. We notice them when they are covered by mainstream media; although the coverage only occurs when these mobilizations reach their apex. Generally speaking, we fairly quickly jump to some other concerns, as if the Tahir square protests, the Madrid Indignados, or the street confrontations in Athens, Istanbul or Bangkok were merely sudden and short-lasting eruptions. That was notably how the Québec spring of 2012 was depicted. This large citizens’ movement, originally launched by a spectacular student strike, rapidly turned into something broader, of an unprecedented scope. Three years later, a new Québec spring is taking shape around a wide coalition: students, public sector unions, and public service users are leading to a growing multitude rising against the 1%.

The Depth of a Movement

This new “Québec spring” is neither a marginal nor a momentary reaction to any particular government’s policy. In 2012, there certainly was the specific trigger of the tuition hike prompting a major student strike. But a closer look at what happened shows that several steps in the prior decade allowed for the movement to gain strength. In 2000 for instance, the Québec women’s federation (Fédération des femmes du Québec, FFQ) organized a very important movement for advancing the condition of women. In 2001, the “Americas People’s Summit” in Québec City and the protests against the Free Trade Area of the Americas (FTAA) promoted by the Canadian and U.S. governments led to the renewed wave of protest across the hemisphere, and the eventual defeat of the FTAA. In 2003, immediately after the election of a “shock” neoliberal government in Québec, strikes and protests forced the regime to shamefully back-off. In 2005, students took everybody by surprise when they paralysed their Cégeps and Universities and forced the government to withdraw its anti-student measures. In 2011, a great movement led by a coalition comprising a wide array of groups, from farmers, to suburbanites, to environmentalists and First Nations compelled the abandonment of shale gas exploitation projects. Some citizens built encampments in several cities, including Montréal and Québec, in the wake generated by the Occupy movement. As a final example: the student and popular movement of 2012 lasted for more than 5 months, actively mobilizing at least 500,000 people (of a total population of less than 8 million), and forced the resignation and the eventual electoral defeat of the governing party.

These moments of activism were certainly the result of continuous mobilization work of popular organizations, student associations, women’s collectives, ecological groups, trade unions and others. In parallel, those organizations consolidated broad coalitions (the most important being the “Red Hands coalition”) where the majority accepted to support each other’s struggles. Québec Solidaire emerged over the same period, and appears to be the beginning of a political alternative that coalesces not only political parties, but also certain sectors of the popular movement.

Here we are, in 2015, facing a new polarization. The 1%, analysing its recent defeats, re-tuned its organizations and unified its various factions around a coherent plan to try and win back the progress achieved by the popular sector. This alliance expresses itself through various right wing political parties with quasi-identical programs, all strongly supported by the few corporations monopolizing the mass media. Together, they promote two priorities in the struggle for ideas. They first defend the quasi-iconic “necessity of austerity,” inevitable for Québec to avoid becoming like Greece or Venezuela! The dominants have not really won this battle, notably because their proposal relies on false arguments that even the IMF recently rejected.

Hence the second battlefront: security. According to the state, Québec, and Canada as a whole, are threatened by a terrorist invasion. A few discrete and isolated events are used to stigmatize a great part of the population (migrants, refugees, people somehow related to Arab and/or Muslim cultures). It is this war of all-against-all that justifies the misuse of public funds toward militarization and also, if not mostly, to justify the adoption of numerous freedom-killing laws like the ones adopted in the United States and many Europeans countries. This is purposefully devised to blind us from other issues.

From One Spring to Another and Beyond

Facing this new offensive, the popular movement is getting mobilized. Since October (2014), over 700 protests have taken place from one side of the province to the other, in big cities and remote villages. Media cannot ignore marches of 150,000 people (November 2014), and 80,000 (April 2015), but they conceal the work being done outside of big cities by unlikely coalitions comprising unions, students, and several other sectors, even including elected municipal officials. Indeed, the attempted state re-engineering being pursued by the current government includes an actual slaughter of rural regions, where numerous institutions ranging from schools to healthcare facilities will be closed in the name of ‘austerity’.

A “coalition of coalitions” coordinates these movements toward a great day of action on May Day. It also projects several actions over the course of the summer eventually leading to an important workers’ strike next fall.

The polarization is still alive. To counter the popular movement, the Québec state uses fear, and exploits the movement’s hesitation and internal divisions. Unlike 2012, students have not been able to sufficiently expand their strike. Sub-groups attempted ill-prepared localized “commando” actions. This strike, which was devised to generate wider support, did not achieve its goals despite the tens of thousands of students who showed their pugnacity and resolve, notably through the Association pour une Solidarité Syndicale Étudiante(ASSÉ).

The deepening and extension of movements depends on several factors, notably the linkages between the student movement, the citizenry, and the 350,000 employees of the public sector who all have to cope with the austerity measures. These measures will create a tremendous retrogression for working conditions and wages, not only in the public sector, but for all wage earners. So far the three main union federations (CSN, FTQ, CSQ) are still evaluating their course of action to act upon those policies.

It remains impossible to predict the future, but without romanticism or ingenuity it still makes sense to think of the current movement as being engaged in a “longue durée” struggle. As we say: we are not running a sprint, but a marathon.