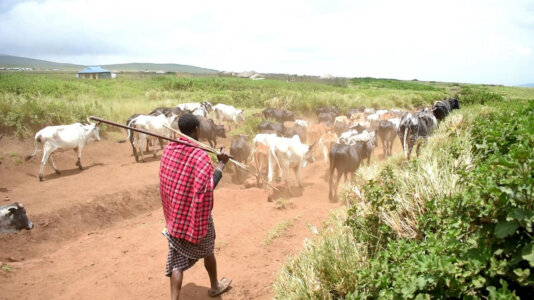 The Maasai’s Peaceful Fight Over Their Homeland

Above photo: A Maasai herding its cattle in the Ngorongoro Conservation Area.

Native to the north of the country, Tanzania’s Maasai people have been protesting against the government’s renewed efforts to strip them of the right to occupy and use their ancestral lands. What would it take to defend their homeland?

“I am born to live my life,” says Denis Moses Oleshangai, a Maasai youth activist hailing from northern Tanzania, in the Ngorongoro province’s village of Endulen. “But to live my life I need to achieve my dreams, so I will be fighting even if there is any danger, or obstacle for community and myself.”

In recent years, many Maasai activists were arrested for speaking out. In 2017, around 200 Maasai houses were burned in Loliondo, their livestock confiscated. Last year, the government announced the destruction of the buildings in Ngorongoro, but ultimately withdrew in the face of widespread protests.

In addition, the Maasai of Ngorongoro have been facing a slew of other restrictions affecting their livelihoods. Traditionally cattle herders, now they are banned from grazing their animals on nutrition-rich lands, which has resulted in the higher mortality of their livestock and has also translated into impoverishment and malnutrition among the community. Consequently, many children died, leaving people in despair.

“Maasai face a choice between life and death,” says Joseph Moses Oleshangai, another lawyer and activist from Ngorongoro. “We resist peacefully, and also raise awareness as many people have been accustomed to these violations.”

“Our culture could be wiped out, that’s why both youths and elders unite,” he explains.

The Maasai of Ngorongoro are denied access to many of the local rivers and are blocked from constructing new houses and schools. Only a few have access to running water, which forces them to fetch it from distant dams and rivers. “This is discrimination,” several Maasai elders argued.

Under mounting pressure, the authorities provided them with limited amounts of maize and salt-licks, which are essential for their livestock. Lab tests have, however, attested to the contamination of the latter. “No government leader has ever made an apology. No one has been held accountable,” says Denis.

Last year, following the beatings of 8 Maasai herders by the park’s rangers and the killing of a few of their sheep, Denis has sought justice for the victims by filling the report to the police station. The perpetrators were, however, quickly released and faced no consequences.

In general, “Maasai are not protesting for political change, but they shall rely on independent courts, so they joined hands with some big political figures,” Denis claims. “Now, it seems that the current constitution and legal order is the problem.”

“Other people in Tanzania also face violations, but not of this magnitude,” Joseph comments. “Only if there is a good constitution and order, there will be accountability. Everything needs a serious overhaul.”

The Ngorongoro Conservation Area (NCA), which is located between Serengeti National Park and the world-famous Kilimanjaro Mountain, is Tanzania’s most frequented reserve, bringing millions in profits annually through entry fees. The Maasai have been herding cattle in NCA long before the establishment of the park, co-existing peacefully with the abundant wildlife.

Some of the Serengeti-born Maasai agreed to move to Ngorongoro in 1958, after signing an agreement with the government. Today, the Ngorongoro residents are targeted by both government officials and some local medias for resisting the evictions.

“The perpetrators of these evictions are strong men and women,” says Denis. “We are fighting top officials, but also big institutions like UNESCO that made wrong recommendations. It really requires sacrifice and determination.”

Throughout the decades, eviction of the Maasai from their ancestral lands has been an incredibly thorny issue. The government has envisioned turning Tanzania’s northern region into several game reserves dedicated to hosting foreign elite hunting clubs. The Ortelo Business Corporation, which is owned by the United Arab Emirates royal family and has been involved in hunting excursions in Tanzania for many years, declined to comment.

Last year, based on governmental reports, UNESCO recommended that the Maasai be evicted from their lands due to the pressure inflicted by human presence and livestock grazing. This has stirred extensive protests by Maasai communities in Tanzania and beyond.

A 2018 independent study debunked the government’s claim on the booming number of livestock. “We lost 70% of the livestock in the drought year of 2017, and few were able to acquire new cows,” Denis explains. “The government has falsely claimed that since then the number of livestock has grown at the very fast rate, and today exceeds one million.”

Following numerous protests and inquiries, UNESCO, which inscribed the NCA on the World Heritage List for its natural values in 1979 and for its cultural values in 2010, has very recently changed its stance on the issue, declaring that they do “not ask for the displacement of the Maasais,” as interpreted by the government.

Since gaining independence in 1961, Tanzania has been ruled by Chama Cha Mapinduzi (CCM), the country’s dominant ruling party and the longest reigning party in Africa.

“Under Magufuli [Tanzania’s previous president], the country was at the U-Turn in democratic development,” Joseph says. “Everyone succumbed to him, except the Maasai, because we never depended on anyone but ourselves.”

Tanzania’s government continues to deny its citizens the right of peaceful assembly; as a result, activism rates are low across the country, Joseph says.

“Civil societies can learn from us the art of resistance. The only way to bring democracy is when the people ask government for accountability and the Maasai have shown the way,” he adds.

The Maasai have organised meetings and conferences away from their homeland, trying to draw attention to their plight. Avaaz, an activist network, has created an online petition to stop the evictions.

Joseph, Denis and other Maasai activists have also engaged on social media, online TV channels and journalists. Recently, however, many local media have chosen either to stay away from the subject or to criticise the communities in line with the government’s stance.

“The Maasai never claim the money from the lucrative tourism sector,” Denis says. “We are also not against conservation. We simply do not want to be evicted from our homeland.”

“The NCA is not only for the Maasai, but is there any national interest in evicting 100,000 people?” he asks.

For all of them, activism constitutes an important method to defend the rights of the community.

“Freedom is never voluntarily given by the oppressor; it must be demanded by the oppressed,” is Denis’ favorite quote by Luther King.

“It’s our duty to fight. I am happy to be a lawyer and be a part of the change in creating a transparent society,” he says. “[But] all citizens need to join hand in fighting for change.”