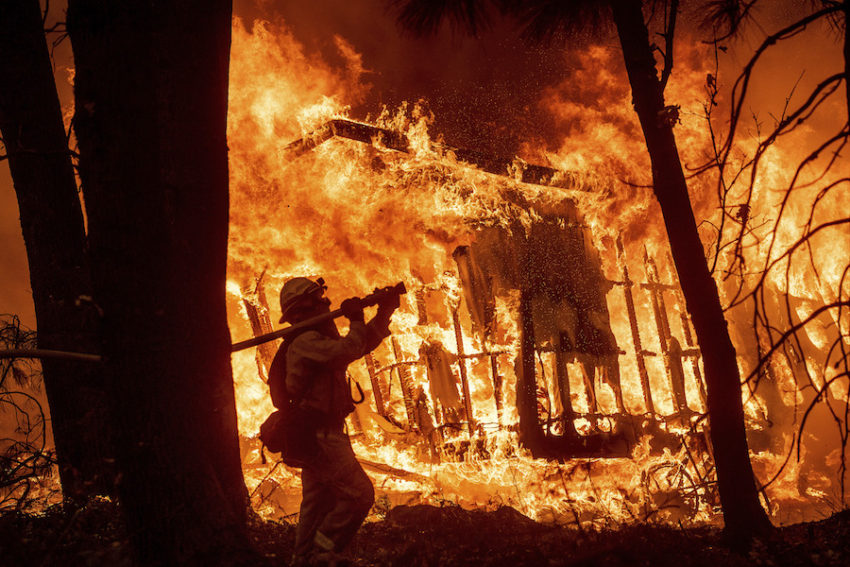 The Mainstream Media Is Lying About The California Fires

I don’t like accurately predicting the future. But it happens to me sometimes. And it’s never a good thing.

Not once have I predicted that I would stumble upon a great sum of money or that a friendly squirrel would mysteriously leave a fresh, delicious scone on my windowsill. No, the things I’ve said that have come true years later have always been utterly awful. And the latest one has to do with California.

This week, Donald Trump has continued to blame the horrific fires in California on forest mismanagement—basically saying that if the parks service had just raked up a few more dry leaves, then countless people, homes and buildings would not have been incinerated. I unintentionally predicted this kind of idiocy. I said something similar in a 2011 stand-up comedy album titled “Chaos For The Weary.”

To paraphrase, I said, “You notice no matter how close they say the major effects of global warming are, it doesn’t change how we all behave. … Soon they’ll be saying, ‘People in California are ON FIRE!’ and everyone will be like, ‘They probably live in a very fiery area. They’re probably storing dry stuff in their homes—like old magazines and elderly people.”

And sure enough, here we are. People in California are on fire, and the president is saying it’s because they stored too many dry pine needles around their homes. Trump is able to do this because most of the mainstream media are allowing him to fill a void—a void that represents the answer to these questions: “Why is this happening? Why is our nation turning into one of the lower circles of hell?”

Don’t get me wrong—the corporate media have extensively covered that California is ON FIRE. They have. They just can’t bring themselves to say the words “climate change” very often. No. It gets caught in their throat like a dry falafel puck. They look like they want to say it but just can’t—like a dog that wants to tell you it has a thorn in its paw. But it’s just impossible.

Take, for example, “NBC Nightly News.” You can’t get a finer news program anywhere (in the building where they tape). I watched a full six-minute segment last week covering multiple California fires, the destruction, the loss of life; they even had reporters on the ground. And yet throughout the entire report, they never uttered the words “climate change,” “global warming” or even simply, “We are fucked.” Instead, they made it sound like fires are a tragic yet common occurrence, and the cities will rebuild.

Never speaking the words “climate change” while whole towns literally go up in flames is like covering the drowning death of someone and never mentioning he was being waterboarded at the time. The real cause of these fires is at least half the story, if not more.

They won’t be in the history books—because in 20 years the history books will be ON FIRE. And the great fires of 2018 will look like nothing but a warm day with a piña colada. Here’s an example of what I mean: A headline from HuffPost read, “California’s Wildfires This Year Have Been Breaking Records—The state has experienced some of the biggest and deadliest fires in its history this year.”

Sounds pretty accurate, doesn’t it? The only problem is that article is from December 2017. LAST year. Did they go down in the history books? How often does everyone huddle under the blankets and take turns telling scary tales about the 2017 fires?

Acting like each year’s fires are a fluke that will never happen again—that in and of itself is denying climate change. It is lying to the American people in order to cover up that we are promoting a system based on big oil, big factory farming and big environmental destruction. A new Media Matters reportfound the mainstream media only say “climate change” in reports about these recent fires 4 percent of the time.

Now, some of you may be thinking, “You can’t prove these fires were caused by climate change.” And you’re right. I can’t. But the Union of Concerned Scientists can.

They said, “The effects of global warming on temperature, precipitation levels, and soil moisture are turning many of our forests into kindling during wildfire season.” The scientists also pointed out that wildfires are increasing and that the wildfire season is getting longer in the U.S. In terms of forest fires over 1,000 acres in size, in the 1980s, there were 140. In the 1990s, there were 160. And from 2000 to 2012, there were 250. And as mentioned before, 2017 was California’s worst wildfire season. … Until 2018.

So if they’re not willing to talk about the obvious causes of our pop-up infernos, what was “NBC Nightly News” reporting on? Well, they spent a good amount of time on the firefighters—correctly informing viewers that these men and women are heroes, and they’re putting their lives on the line to try to save people they’ve never met. Good job, NBC. You only missed one thing. You somehow failed to say that many of the firefighters you highlighted are PRISONERS LOCKED AWAY IN CALIFORNIA’S CORRECTIONAL SYSTEM!

Estimates are that 30 percent of the state’s firefighters are prisoners, and it’s clear from the uniforms that many of the ones NBC filmed were indeed inmates. Sure, they volunteered for that job, but many of them are locked up for small crimes and see no way out of the misery and hardship of prison other than to “volunteer” for fire duty. It’s kind of like how I “volunteered” to give my wallet and shoes to that guy with a gun when he casually noted that he liked my wallet and shoes.

Furthermore, the inmates are working as firefighters for roughly $1 per hour.

ONE DOLLAR PER HOUR.

They get paid less than the amount of money most people are willing to bend down to pick up if they see it in a puddle. But NONE of this is said by “NBC Nightly News” even as they show video of the inmates fighting fires. This would be like showing Nike sweatshop workers in Indonesia and saying, “These fine craftsmen are making your shoes. Oh man, do they love making shoes. They volunteered to do it.”

Are you starting to get the point? Kate Snow’s job—like most of those in mainstream media—is to cover up your reality. Her job is to make you think we live in a system that can recover from this carnage WITHOUT large-scale changes, without a new economic paradigm that doesn’t reward waste and planned obsolescence and profiting off the lives of others. Generally speaking, the job of mainstream corporate outlets is to ignore the harsh reality that our endless consumption and furious appetite for fossil fuels are burning our country, turning it into a desert wasteland—and the easiest response is to throw slave labor at the problem.

On the other hand, it’s the job of you and me to see through the propaganda, through the spectacle and the bullshit, and to fight for a better world.

Maybe it will help if I predict that 20 years from now we all will have woken up from this mass delusion and switched to a sustainable, green, egalitarian economic system.

It’s about time I had a positive prediction come true.