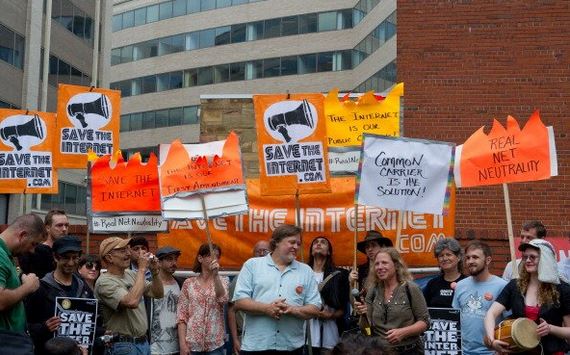 The Man Who Will Dismantle Net Neutrality ‘With A Smile’

NOTE: Popular Resistance, as a member of a broad coalition, was heavily involved in the fight to put reclassification of the Internet as a common carrier on the table and to get it passed by the Federal Communication Commission in 2014-15 in order to protect net neutrality. The new chairman of the FCC, Ajit Pai, was ardently against net neutrality then and continues to be against it now. It is too early to know how he will destroy net neutrality, but we must signal our opposition early and be prepared to take action to defend Internet freedom.

FreePress has a tool that you can use to send a message to the FCC. The messages will be delivered in person before the next public meeting.

Click here to send your note to the FCC.

The well-liked Ajit Pai was a smart pick by President Trump to lead the FCC. But advocates fear his deregulatory policies will hurt consumers.

Washington, DC – Ajit Pai, the new chairman of the Federal Communications Commission, doesn’t let a little thing like a hurricane stop him from his obligations.

When the rest of the East Coast was taking cover from Hurricane Sandy in 2012, then-FCC Commissioner Pai was sitting in his kitchen at his home in northern Virginia, delivering a keynote speech via video conference to attendees at the 4G World Trade show in Chicago.

Pai had been scheduled to give his keynote to the small trade show in person. But Sandy shut down travel to and from Washington, Pai offered to do the address remotely.

“When he was on the big screen, you could see the trees and wind whipping wildly in the midst of the hurricane,” said Fred Campbell, the director of the free-market think tank Tech Knowledge and adviser to former FCC Chairman Kevin Martin who helped organize the show. “He calmly delivered his speech and acted as if it was no big deal.”

For people who know him well, this is no surprise. Pai often goes out of his way to be nice. He’s the kind of person who remembers co-workers’ birthdays or your kids’ first names. It doesn’t matter if you’re a congressman from California or the parking attendant at the lot near the FCC’s headquarters, Pai offers a folksy and sincere greeting to all. He always has a kind word for colleagues, even when they stand on the opposite side of the aisles.

“He made the chairman’s life miserable,” said Gigi Sohn, a former adviser to the previous head, Tom Wheeler, in reference to their constant ideological clashes. “But I like him. Everyone likes him.”

This nice guy is no pushover, though. The 44-year-old chairman has already introduced a number of programs and steered the FCC in a different direction from his predecessor. And he’s still gearing up for his biggest move: the takedown of many of the regulations that protect net neutrality, the concept that all internet traffic must be treated as equal. Supporters of the regulations say loosening the rules will only tighten the control that broadband and wireless companies wield today, likely resulting in higher prices for consumers and fewer choices in services.

“He’s a great guy to have a beer with,” Sohn said in an interview last week. “But don’t be fooled. He’s in favor of dismantling net neutrality and other consumer-friendly policies, and he’ll do it with a smile.”

The rules put in place to enforce net neutrality have proven divisive. Wheeler, President Barack Obama, online players like Netflix and consumer groups have said they’re necessary to ensure that internet providers don’t abuse their powers. Republicans and the cable and telecom industry believe the rules are too onerous and choke off innovation and investment, and they sued the FCC for enforcing them.

Pai is among those who opposed the regulations. Opponents characterize him as an old-school, free-market conservative who “never met a mega-merger he didn’t like or a public safeguard he didn’t try to undermine,” said Craig Aaron, president and CEO of the consumer advocacy group Free Press.

But Campbell said he thinks Democrats and consumer advocates have painted a far too negative portrait of Pai. While Pai is looking for ways to cut regulations, that doesn’t necessarily mean he is anticonsumer.

“There’s an implicit assumption that regulation always benefits consumers,” he said. “And that deregulation hurts consumers. But that’s an unfair characterization.”

The FCC didn’t make Pai available for an interview.

Pai is the son of parents who immigrated from India to practice medicine in rural Kansas. He attended Harvard University and in 1997 earned a law degree from the University of Chicago.

For a man in his mid-40s, Pai already has a packed resume. He spent most of his career in government, including positions at the FCC, the Justice Department and the Senate Judiciary Committee, where he worked under the leadership of then-committee chairman, Sen. Jeff Sessions, who was sworn in as attorney general on Thursday.

It was while serving as an FCC commissioner over the last four years under Wheeler that Pai made his mark. He was a sharp critic of Wheeler, and ahead of the vote on net neutrality regulations in 2015, he accused the chairman of a “secret plan to regulate the internet” that “opens the door to billions of dollars in new taxes” on broadband services.

Pai also accused Wheeler of misleading the public and bending to the whims of President Obama in crafting the net neutrality rules. He consistently voted with the Republican minority on the commission, and claimed Wheeler sparked partisan drama.

Days after his inauguration in January, President Donald Trump elevated Pai to the chairman’s seat, with the Republican party now controlling two of the three votes at the commission. (Two seats on the commission are currently vacant awaiting appointments from President Trump. One will be a Democrat and the other will be a Republican, to ensure a Republican majority.)

Pai’s qualities stand in contrast with those of the man who appointed him. Where President Trump is an abrasive outsider who has picked online fights with stars like Rosie O’Donnell and retailer Nordstrom, Pai asked his nearly 22,000 Twitter followers what shows to stream after binge-watching “Game of Thrones.” He’s a well-mannered Washington insider known for peppering his speeches and statements with pop culture references, like a quote from Emperor Palpatine from “Return of the Jedi.”

One thing he has in common with Trump is a willingness to move quickly. In his first two weeks in the new job, Pai’s stopped nine companies from providing discounted high-speed internet service to poor people, a decision he defended earlier this week as a way to ensure the subsidy program is not abused. He ditched a proposal to open up the set-top box market, and in federal court he stopped defending the agency’s rules to cap phone rates in prisons.

He also revoked several reports and orders Wheeler had pushed through after the election, arguing “these last-minute actions, which did not enjoy the support of the majority of commissioners at the time they were taken, should not bind us going forward.”

But the biggest target on Pai’s hit list is the FCC’s net neutrality rules. Pai has made no secret of his belief that the FCC overstepped its authority when it reclassified broadband as a public utility, which supporters said was a necessary move to provide the legal justification for the rules.

Exactly how or if he will tear down the regulation is unclear. Pai said at his first press conference that he supports an open internet, but wasn’t a fan of Wheeler’s legal maneuverings.

A repeal of the rules by the FCC could also face legal challenges, since a federal appeals court last year upheld the rules and the FCC’s authority.

Pai already signaled that he has no intention of enforcing the rules. Last week, he closed an investigation into AT&T’s and Verizon’s zero-rating practices, which allow customers to watch video from certain applications from their mobile devices without it counting against their monthly data caps. In December, the FCC said the companies’ plans violated the net neutrality rules because they prioritized some services over others.

Net neutrality will likely consume much of Pai’s attention in the early part of his time as chairman. But Pai also has other policy objectives. One of his top priorities is bringing broadband to all Americans.

He’s particularly interested in ensuring rural communities, like where he grew up in Kansas, have access to the same cutting-edge technology as big cities. At his first FCC meeting as chairman, he introduced the “Broadband Deployment Advisory Committee,” or BDAC, which will identify older FCC regulations that it sees as blocking broadband expansion.

“One of the most significant things that I’ve seen during my time here is that there is a digital divide in this country — between those who can use cutting-edge communications services and those who do not,” Pai said in January while addressing the FCC staff for the first time as chairman. He went on to say that the agency should “do what’s necessary to help the private sector … bring the benefits of the digital age to all Americans.”

Even though consumer advocates fear Pai’s agenda and the direction he intends to take the FCC, few would argue he isn’t suited for the job.

Unlike some of Trump’s more controversial appointments like Secretary of Education Betsy DeVos, who many critics said was unqualified for the job, or Environmental Protection Agency head Scott Pruitt, who once sued that agency, Pai is both qualified for the job and respects the agency he heads up, said Reed Hundt, a former FCC chairman, who served under Bill Clinton in the 1990s.

The first thing people comment on when asked about Pai, who can easily rattle off specific sections of arcane federal telecom law, is his intellect.

The telecom and cable companies were enamored of his appointment.

“No one is more prepared to reframe the agency to address the needs of this rapidly changing marketplace,” AT&T said in a statement. David Cohen, Comcast’s chief lobbyist, called him “a terrific appointment for the American consumer and the companies the FCC regulates.”

But for consumers, hoping for policies that will keep their broadband and wireless providers in check, Pai could represent stormy times ahead.