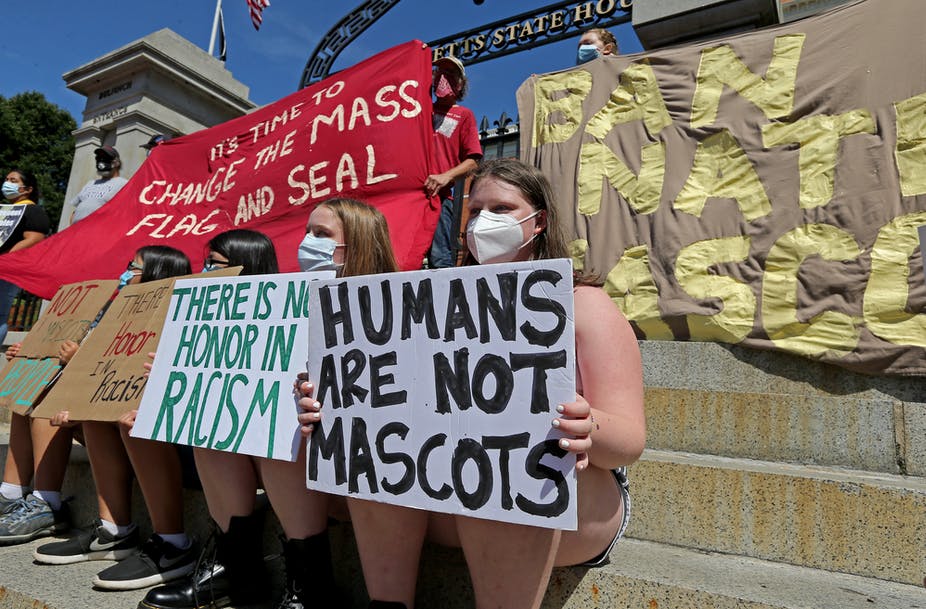 Above Photo: Change the Flag supporters protest on the steps of the statehouse on July 16, 2020 in Boston. Stuart Cahill/MediaNews Group/Boston Herald via Getty Images.

Given the violent history of English colonizers in New England, it’s a wonder why the state insignia of Massachusetts, fully emblazoned on today’s state flag, still includes a sword dangling over the head of a Native American.

It was a little more than 30 years ago when the Massachusetts Turnpike Authority got rid of its offensive logo that featured a pilgrim’s hat with a Native American arrow shot through the middle of it.

The state insignia still stands, and like many campaigns to rid schools and towns of demeaning mascots and public statues, the efforts to remove it starts with an accurate version of history. In the case of the Mass Pike logo, it started with a letter-writing campaign by second graders learning about the history of Plymouth Plantation in 1620.

The story of the current Massachusetts insignia starts with the 17th century seal of the Massachusetts Bay Colony. This insignia depicted an almost naked Native American, covered in some leaves, with a speech bubble stating: “Come over and help us.”

This earlier seal was replaced by a few others, but in 1895, the image of a Native American was reintroduced to the state flag. At first glance, the current seal appears less offensive. The Native American is dressed at least, and the speech bubble was deleted. But there is a sword dangling over the Native American’s head.

This sword is modeled after the weapon used by Miles Standish, who was in charge of Plymouth Plantation’s military affairs. As English colonial records show, Standish led several violent battles against Native Americans. 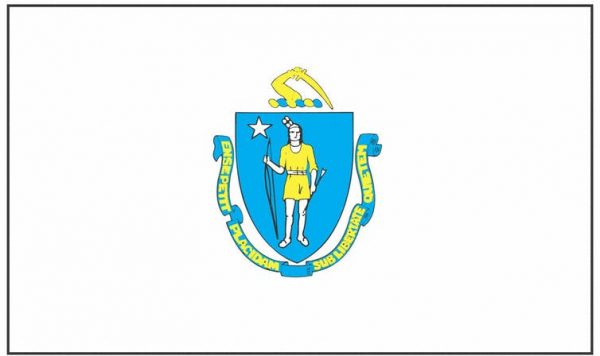 During one such fight, a Native American was decapitated and his head was displayed on a pike as a trophy outside of Plymouth, a common practice in early modern English warfare. Moreover, the belt on the image is based on the one worn by Metacom, a tribal leader of the Pokanoket Tribe and the Wampanoag Nation who was called King Philip by English settlers. Metacom led an anti-colonial resistance movement in the 1670s in what is known as King Philip’s War.

Again, and following an established pattern in the region, after Metacom was killed, his head was impaled on a pike at Plymouth and left displayed there for two decades.

Given the central role that violent warfare against Indigenous peoples played during the colonization of New England, the state motto, “By the sword we seek peace, but peace only under liberty,” raises questions about the accuracy and sensitivity of the state’s choice of images and words to represent its history and values.

Native American groups such as the United American Indians of New England have been critical of the state seal and other inaccurate Indigenous representations for decades. The seal is not the only target of protests.

The insignia and mottos of several Massachusetts towns, as well as statues, buildings and sports mascots across the state, have caused controversy. The town seal of Andover, which depicts an Indigenous leader who supposedly sold land for a change of clothing, is one example. The Hannah Duston statue in Haverhill has also been a source of debate. It depicts a 17th century New English woman who, after her capture by Native Americans, led the killing and scalping of 10 sleeping Native Americans, the majority of them children, women and elderly.

Of course, similar discussions occur on a national level about how we remember the past. Just take the recently abolished Mississippi state flag, which included Confederate symbolism, or the debates surrounding controversial statues of Confederate soldiers.

What has been limited in the past to street demonstrations is now a legislative priority for Massachusetts Gov. Charlie Baker. He recently created a “Special Commission Relative to the Seal and Motto of the Commonwealth.” According to the website describing the special commission’s first hearing, held on July 19, 2021, it is charged with not only making “recommendations for a revised or new design of the seal and motto” but also with creating “an educational program on the history and meaning of the seal and motto.”

Baker’s initiative underscores Native American groups’ efforts to bring about legislative change and create more respectful representations of Indigenous peoples. But the recommendations of the all-volunteer committee were due on Oct. 1, 2021. To this date, they have not been submitted, and it is unclear when they will be.

While Native American activists and allies are keenly aware of this disturbing New England history, my experience as a public speaker and scholar of Native American history suggests many residents in Massachusetts have little awareness of the seals’ symbolism and the region’s past.

Given this reality, the state has another option in addition to legislative acts – provide more resources for public education, including historic signage and markers in public spaces.

Separate from the commission, a campaign to educate the public might prove to be a more constructive way to tell the story of Native Americans as well as English colonists. This could be achieved through partnerships among Native American and educational nonprofit organizations and primary, secondary and university educators, as well as the state Department of Elementary and Secondary Education.

Through public talks and teacher workshops, of which I have given close to 20 in 2021, I have seen a need for a more expansive initiative. Many Massachusetts residents are interested in learning more about the legacies of New England colonization and how they affected Native Americans. More important, educators are eager for resources to teach this difficult subject.

In Massachusetts, and throughout the United States, providing resources to eliminate demeaning depictions of Native Americans would go a long way toward critically coming to terms with the country’s violent past.