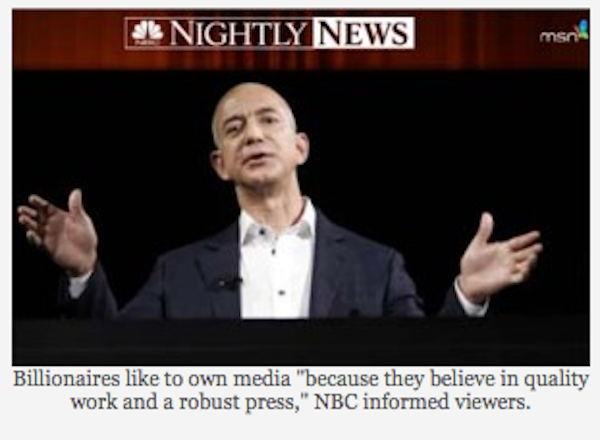 “Poverty and income inequality, Scott, are shaping up to be key issues, not just here in the capital this year but at the White House as well.”

With poverty at 15 percent, inequality rising and Republican politicians talking about addressing the problem by cutting federal programs that help the poor, one might expect poverty to occupy a solid spot on media agendas.

This isn’t the case, according to a new FAIR study of nightly network news shows. The study looked at ABC World News, CBS Evening News and NBC Nightly News for a 14-month period (1/1/13– 2/28/14) in the wake of the 2012 elections. FAIR examined stories in the Nexis news database that included and discussed the terms “poverty,” “low income,” “food stamps,” “welfare” or “homeless.” (Stories that included only passing mentions of these terms, without even a minimal discussion, were excluded.)

A total of 23 such segments were found, three of which were “rip and read” briefs, anchor-read stories containing no sources. The other pieces included a total of 54 sources, less than half of which—22—were people personally affected by poverty. That means, on average, someone affected by poverty appeared on any nightly news show only once every 20 days.

By comparison, over the same period the network news shows aired almost four times as many stories, 82, that included the term “billionaire.” There are 482 billionaires in the US, compared to nearly 50 million living in poverty, according to Census standards, which some scholars say greatly undercount the poor (Extra!, 9/12).

Stories on the rich often painted them in a favorable light. NBC Nightly News (8/5/13) aired a story about the recent trend of billionaires, including Warren Buffett and Jeff Bezos, buying up newspapers—in “many cases,” anchor Brian Williams explained, “because they believe in quality work and a robust press.”

ABC World News (1/26/14) aired a story on billionaire Tom Perkins’ claim that there’s a war against the rich in the US. In the piece, Perkins compared criticism of the wealthy to Kristallnacht, the murderous 1938 Nazi rampage against German Jews.

An average of just 2.7 seconds per 22-minute nightly news program was devoted to segments where poverty was mentioned. This overstates the coverage, as many of these segments were not primarily about poverty, but included only a brief discussion of the subject. For instance, in a 130-second CBS Evening News segment about Congress passing a bill to get air traffic controllers furloughed by the sequester back to work, Rep. Steny Hoyer (D-Mary-land) was quoted in an 14-second soundbite criticizing the narrowness of the bill:

Seventy thousand children will be kicked out of Head Start. Nothing in this bill deals with them. Four million fewer Meals on Wheels for WIC. Six hundred thousand people dropped off WIC, nothing in here for them.

CBS Evening News featured the most segments discussing poverty, with 12, followed by NBC with eight. Throughout 2013, NBC featured a poverty-focused feature called “In Plain Sight,” underwritten by the Ford Foundation*, that accounted for five of the network’s eight poverty segments. (Much of the feature’s content was online-only.) ABC discussed poverty in just three stories in the 14-month period—a rate of one story every 20 weeks. The depth of coverage varied widely, from some relatively long and informative segments that shed light on conditions and remedies, to segments that were almost uselessly brief or even dismissive.

Contrast that with an awkward, 40-word “rip and read” by ABC World News anchor Diane Sawyer (2/4/14), who seemed to minimize the $8 billion in cuts to the EBT program (better known as the food stamp program) included in the recently passed Farm Bill:

After a two-year fight today, the Senate passed a farm bill which cuts $8 billion from the food stamp program. But that’s far less than the $40 billion Republicans wanted to cut. And the president is expected to sign this bill.

In a longer segment that included some of those affected, it would have been harder to look on the bright side of an $8 billion cut in food aid.

In 2007, FAIR (Extra!, 9/07) conducted a similar study, using the same search terms and parameters. The results show very little change. The recent study shows a tiny increase in the frequency of poverty stories: In 2007, there were 58 stories over the course of a 38-month study, for a rate of 1.5 poverty segments each month on the three networks combined. The current study shows 23 segments on the same shows over the course of 14 months, for a rate of 1.6 stories each month.

In 2007 (9/07), we quoted the Tyndall Report‘s finding that there were just 2.5 seconds of poverty coverage in the average 22-minute nightly newscast in the months leading up to Hurricane Katrina in August 2005. FAIR’s 2007 study looked at how well network news fulfilled the promise of television journalists like NBC‘s Brian Williams, who, after witnessing the crucial role economic hardship played in the suffering caused by Hurricane Katrina and the government’s response to it, vowed to make an extra effort to pay attention to poverty (Extra!, 8/06).

According to the 2007 study, that effort resulted in the average nightly news increasing coverage slightly, to four seconds per newscast. FAIR’s current study shows that the coverage, at 2.7 seconds per nightly newscast, has nearly returned to its 2005 low point.

FAIR’s study (Extra!, 9/12) of how poverty was covered during the 2012 political campaign cited a dodge journalists occasionally employ to justify not covering a crucial issue: How can we pay attention to something politicians aren’t talking about? And it was true that the almost nonexistent coverage of poverty in the campaign corresponded with a failure of either major party to make poverty an issue.

That has not been the case during the period of the current study. While Democrats may have been silent, Republicans have attempted to make an issue of poverty, arguing for cutting federal poverty programs and transferring their funds to the states (CBS Evening News, 1/8/14). Now that politicians are talking about poverty, media have run out of excuses.