The More Valuable Your Work Is To Society, The Less You’ll Be Paid For It

One of the most frequently heard complaints from supporters of the Occupy Wall Street movement—particularly the ones working too much to spend much time in the camps, but who could only show up for marches or to express support on the Web—ran along the lines of: “I wanted to do something useful with my life; work that had a positive effect on other people or, at the very least, wasn’t hurting anyone. But the way this economy works, if you spend your working life caring for others, you’ll end up so underpaid and so deeply in debt you won’t be able to care for your own family.” There was a deep and abiding sense of rage at the injustice of such arrangements. I began to refer to it, mostly to myself, as the “revolt of the caring classes.” At the same time, occupiers in Manhattan’s Zuccotti Park regularly reported conversations with young Wall Street traders who’d drop by and say things to the effect of: “Look, I know you guys are right; I’m not contributing anything positive to the world, the system is corrupt, and I’m probably part of the problem. I’d quit tomorrow if you could show me how to live in New York on a less-than-six-figure salary.”

I spoke to people who gave testimonies echoing similar dilemmas: Annie, who noted how many women taking care of preschoolers were ultimately forced to quit and find office jobs to pay the rent, and Hannibal, the medical researcher, who summed up his experience in the medical field with the formula “the amount of money I can charge for doing the work I do is almost perfectly inversely correlated with how useful it is.” That there’s a real problem here can be demonstrated by a simple thought experiment I proposed in a 2013 article that led to this book (On the Phenomenon of Bullshit Jobs: A Work Rant): imagine if a certain class of people were to simply vanish. Let me expand on this for a moment. If we all woke up one morning and discovered that not only nurses, garbage collectors, and mechanics, but for that matter, bus drivers, grocery store workers, firefighters, or short-order chefs had been whisked away into another dimension, the results would be equally catastrophic. If elementary school teachers were to vanish, most schoolchildren would likely celebrate for a day or two, but the long-term effects would be if anything even more devastating. And while we can no doubt argue about the relative merits of death metal versus klezmer music, or romance novels versus science fiction, there’s no doubt that even if the sudden disappearance of certain categories of authors, artists, or musicians left certain sectors of the population indifferent or even happy, for others the world would become a far more dismal and depressing place. 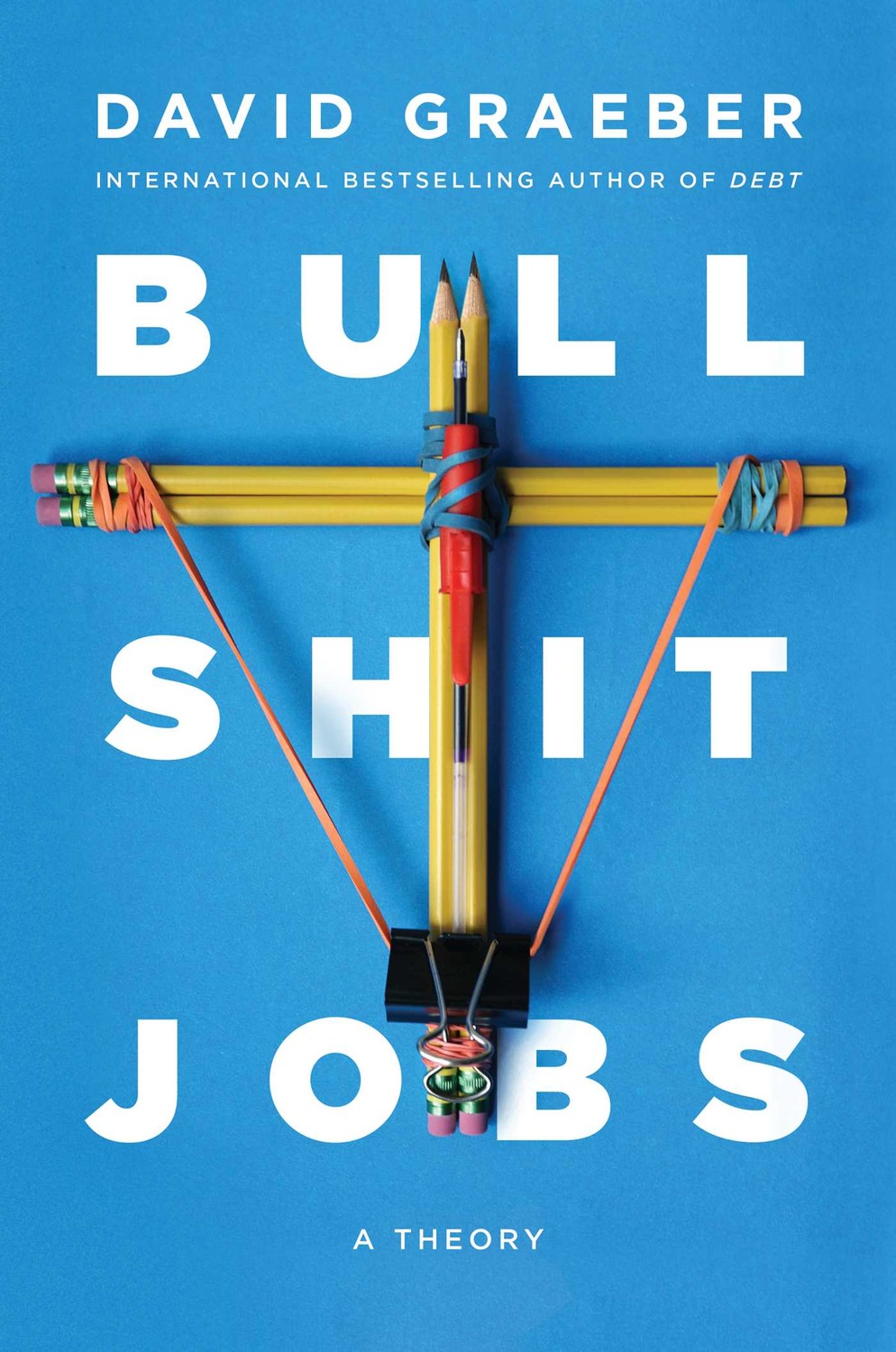 The same cannot be said of hedge fund managers, political consultants, marketing gurus, lobbyists, corporate lawyers, or people whose job it is to apologize for the fact that the carpenter didn’t come. I spoke to Finn about his software licensing firm: “If I showed up on Monday and the building had disappeared, not only would society not care, I wouldn’t, either.” And there are certainly office buildings in the world—I’m sure anyone reading this book can think, just off the top of her head, of several— that, were they to simply vanish, would leave the world much better off.

Yet in many of these are precisely the people who get paid the very highest salaries.

In fact, it often happens that, at the very top of organizations, apparently crucial positions can go unfilled for long periods of time without there being any noticeable effect—even, on the organization itself. In recent years, Belgium has gone through a series of constitutional crises that have left it temporarily without a sitting government: no prime minister and no one in charge of health, transportation, or education. These crises have been known to continue for considerable periods of time—the record so far is 541 days—without there being any observable negative impact on health, transportation, or education. One has to imagine that if the situation were to endure for decades, it would make some sort of difference; but it’s not clear how much of one or whether the positive effects would outweigh the negative ones. Similarly, at time of writing, the Uber corporation, considered one of the world’s most dynamic, has seen the resignation not only of its founder, Travis Kalanick, but a host of other top executives, with the result that it “is currently operating without a CEO, chief operating officer, chief financial officer, or chief marketing officer”— all without any apparent effect on day-to-day operations.

Similarly, there’s a reason why those who work in the financial sector, and who have extremely well-paid occupations more generally, almost never go on strike. As Rutger Bergman likes to point out, in 1970 there was a six-month bank strike in Ireland; rather than the economy grinding to a halt as the organizers had anticipated, most people simply continued to write checks, which began to circulate as a form of currency, but otherwise carried on much as they had before. Two years before, when garbage collectors had gone on strike for a mere ten days in New York, the city caved in to their demands because it had become uninhabitable.

Very few economists have actually attempted to measure the overall social value of different professions; most would probably take the very idea as something of a fool’s errand; but those who have tried tend to confirm that there is indeed an inverse relation between usefulness and pay. In a 2017 paper, US economists Benjamin B. Lockwood, Charles G. Nathanson, and E. Glen Weyl combed through the existing literature on the “externalities” (social costs) and “spillover effects” (social benefits) associated with a variety of highly paid professions, to see if it were possible to calculate how much each adds to or subtracts from the economy overall. They concluded that while in some cases—notably anything associated with creative industries—the values involved were just too subjective to measure, in other cases, a rough approximation was possible. Their conclusion: the most socially valuable workers whose contributions could be calculated are medical researchers, who add $9 of overall value to society for every $1 they are paid. The least valuable were those who worked in the financial sector, who, on average, subtract a net $1.80 in value from society for every $1 of compensation. (And, of course, workers in the financial sector are often compensated extremely well.)

Here was their overall breakdown:

This would certainly seem to confirm a lot of people’s gut suspicions about the overall value of such professions, so it’s nice to see it spelled out, but the authors’ focus on the most highly paid professionals makes it of limited use for present purposes. Schoolteachers are probably the lowest-paid workers on the list, at least on average, and many researchers get by on very little, so the results certainly don’t contradict a negative relation between pay and usefulness; but to get a real sense of the full gamut of employment, one needs a broader sample.

The closest I know to such a study that does use such a broader sample was one carried out by the New Economic Foundation in the United Kingdom, whose authors applied a method called “Social Return on Investment Analysis” to examine six representative occupations, three high-income, three low. Here’s a summary of the results:

The authors admit that many of their calculations are somewhat subjective, as all such calculations must be, and the study focuses only on the top and bottom of the income scale. As a result, it leaves out a majority of jobs, which are mostly midrange in pay, and in most cases, at least, the social benefit is neither positive nor negative but seems to hover around zero. Still, as far as it goes, it strongly confirms the general principle that the more one’s work benefits others, the less one tends to be paid for it.

There are exceptions to this principle. Doctors are the most obvious. Physicians’ salaries tend to the upper end of the scale, especially in America, yet they do seem to play an indisputably beneficial role. Yet even here, there are health professionals who would argue they’re not as much exceptions as they might seem—such as a pharmacist I spoke to who was convinced most doctors contribute very little to human health or happiness but are mainly just dispensers of placebos. This may or may not be the case; frankly, I don’t have the competence to say; but if nothing else, the oft-cited fact that the overwhelming majority of improvement in longevity since 1900 is really due to hygiene, nutrition, and other public health improvements and not to improvements in medical treatment, suggests a case could be made that the (very poorly paid) nurses and cleaners employed in a hospital are actually more responsible for positive health outcomes than the hospital’s (very highly paid) physicians.

There are a smattering of other exceptions. Many plumbers and electricians, for instance, do quite well despite their usefulness; some low-paid work is fairly pointless—but in large measure, the rule does seem to hold true.

The reasons for this inverse relation between social benefit and level of compensation, however, are quite another matter. None of the obvious answers seem to work. For instance: education levels are very important in determining salary levels, but if this were simply a matter of training and education, the American higher education system would hardly be in the state that it is, with thousands of exquisitely trained PhDs subsisting on adjunct teaching jobs that leave them well below the poverty line—even dependent on food stamps. On the other hand, if we were simply talking about supply and demand, it would be impossible to understand why American nurses are paid so much less than corporate lawyers, despite the fact that the United States is currently experiencing an acute shortage of trained nurses and a glut of law school graduates.

Whatever the reasons—and myself, I believe that class power and class loyalty have a great deal to do with it—what is perhaps most disturbing about the situation is the fact that so many people not only acknowledge the inverse relation but also feel this is how things ought to be. That virtue, as the ancient Stoics used to argue, should be its own reward.