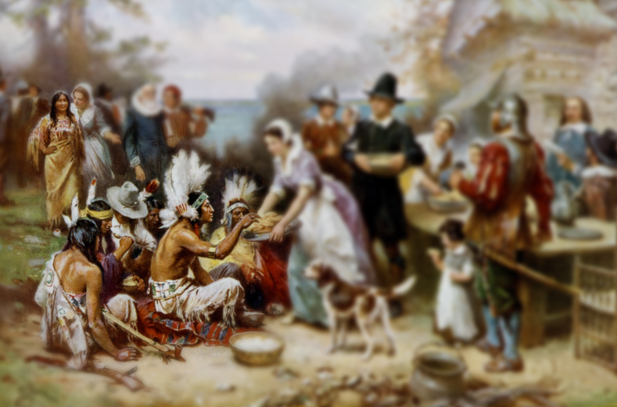 The Myth Of Thanksgiving

Thanksgiving is the favorite holiday of many US Americans; unlike the rather boring or divisive holidays that honor Columbus, Presidents, Martin Luther King, Jr., Independence, veterans and war, the birth of a religion, and a new year, Thanksgiving is centered on sharing food with family and friends. Individuals and families travel long distances at great expense to be with one another. It might be surprising to learn that the cherished tradition of Thanksgiving is, in fact, the most nationalist of all holidays because it narrates the national origin myth. The traditional meal, as we know, consists of the foods cultivated by Indigenous farmers—corn, squash, pumpkin, sweet potatoes, and turkey.

The US origin story of a covenant with God goes back to the Mayflower Compact, the first governing document of the Plymouth Colony. It is named for the ship that carried the hundred or so passengers, half of them religious dissidents, to what is now Cape Cod, Massachusetts, in November 1620. This compact marked the beginning of settler democracy, which from its inception sought the elimination of the Indigenous. Behind the black clothed and solemn “Pilgrims,” was a corporation of shareholders, the Virginia Company, accompanied by armed and seasoned mercenaries on a colonizing project ordered by the English King James. If any local Natives were present at a colonizers’ celebratory meal, they were surely there as servants, and the foods were confiscated, not offered as a gift.

“Thanksgiving” became a named holiday during the Civil War, but neither Pilgrims, nor Indians, nor food, nor the Mayflower—all essential to today’s celebration—were mentioned in Lincoln’s 1863 proclamation.

It was during the Great Depression that the Thanksgiving holiday was transformed into a nationalistic origin story to bind a chaotic society experiencing economic and social collapse. But this idea of the gift-giving Indian, helping to establish and enrich what would become the United States, is an insidious smoke screen meant to obscure the fact that the very existence of the country is a result of the looting of an entire continent and its resources.

In 1970, on the 350th anniversary of the English settlers—“Pilgrims”—occupying land of the Wampanoag Nation, the United American Indians of New England led a protest of the Thanksgiving holiday, which they called a “National Day of Mourning.” Every year since that time, the National Day of Mourning has taken place at Plymouth Rock. They rightly accuse the United States government of having invented a myth to cover the reality of colonialism and attempted genocide. By Thanksgiving 1970, Native Americans from many Indigenous nations had been occupying Alcatraz Island for a year. It was the height of renewed Native resistance to US colonial institutions and calls for sovereignty and self-determination, which have continued and seen many victories as well as new obstacles. In 2007, after three decades of Indigenous Peoples’ lobbying, the United Nations General Assembly passed the “Declaration on the Rights of Indigenous Peoples.”

Thanksgiving needs another transformation, a day to mourn US colonization and attempted genocide and celebrate the survival of Native Nations through their resistance.