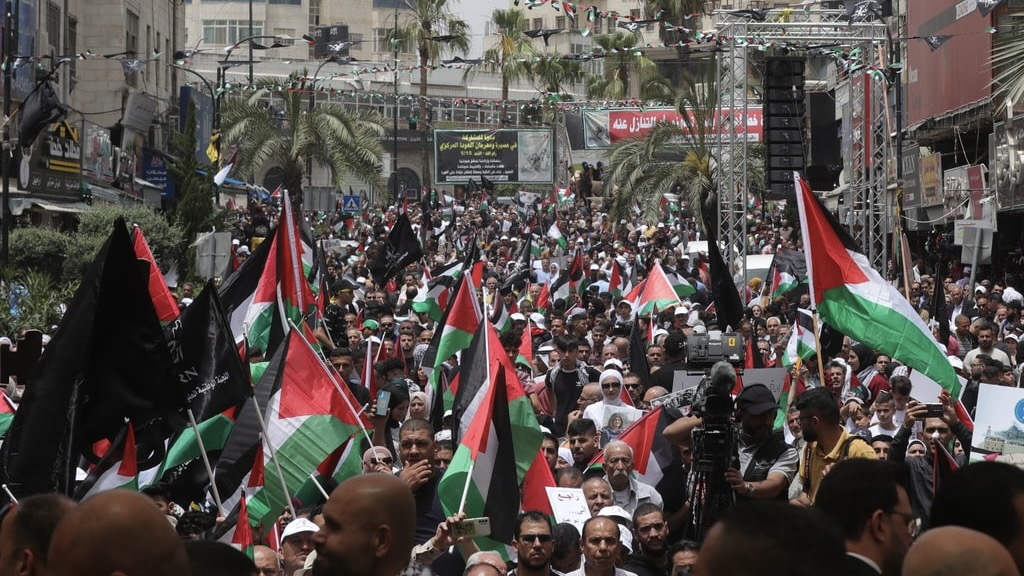 The Nakba Never Ended, And Palestinian Resistance Hasn’t Either

Above Photo: Thousands of Palestinians commemorate the 74th anniversary of the 1948 Nakba in downtown Ramallah, center of the occupied West Bank. Mohammad Abu Zaid.

Palestinians continue to resist the continued attempts to displace, dispossess, and expel them from their native land by the Israeli state.

A few days before Palestinians were set to commemorate the 74th anniversary of their forceful displacement from their ancestral lands, known as the Nakba or catastrophe, the Israeli Supreme Court rejected a 23-year-old petition by the residents of Masafer Yatta in the occupied southern West Bank and allowed the Israeli military to demolish hundreds of their houses arguing that they are in “firing range”. The incident is part of a systemic policy of the Israeli state to grab more and more Palestinian lands and force the Indigenous Palestinians to live as a refugees in their own country. This everyday Nakba, however, fails to dampen the will of Palestinians to fight for their freedom, land, and right to return.

Since 1948, when the largest single event of forced displacement, ethnic cleansing, and violence against the Palestinian people took place, tens of thousands more Palestinians have continued to face the violence of the settler-colonial Zionist project. The map of Palestinian land continues to shrink while Israeli state institutions continue to rule in favor of illegal Israeli settlement expansion and further displacement of Palestinians.

Arwa Abu Hashhash, a political activist from Palestine told Peoples Dispatch, “we consider that the Nakba is a continuous process since 1948 until today, and it has many manifestations (displacement, killing, arrest, land grab, water theft..and many more). The Israeli occupation keeps killing and displacing the Palestinian people on a systematic basis and on a daily basis.”

“Masafer Yatta is just an example we are living today of the displacement that Palestinians are subjected to on an ongoing basis… Sheikh Jarrah is another example, where dozens of families live under the threat of eviction from their home,” she emphasized.

January 2020 figures of United Nations Relief and Works Agency for Palestine Refugees in the Near East (UNRWA), indicate that there are 6,293,390 Palestinian refugees in the Arab world alone which includes refugees living in occupied Gaza and West Bank. There are over a million more such refugees, not necessarily registered with UNRWA in West Asia. At the time of the Nakba, at least 700,000 Palestinians were forced to leave their homes in places which now fall inside Israel.

On May 11 of this year, the Neftali Bennet government issued a fresh order to construct over 4,000 new homes for settlers in the occupied West Bank. 3,000 more settlements were approved in October last year.

Bassam Al-Salhi, the general secretary of Palestinian People’s Party told Peoples Dispatch, despite the destruction of their entire social fabric, “the Palestinian people rose from the impact of the Nakba to regroup themselves and launch again their national movement and renaissance as a people occupied.” He added that the Palestinian people “are still struggling for their legitimate rights to self-determination, the state, the return [to Palestine], and against the colonial apartheid project in Palestine.”

Arwa Abu Hashhash asserted, Palestinians know that “living under the Israeli occupation means living under the threat of displacement, killing and violence at any moment.” They have no other option but to resist and so they are doing.

For the last two years, Palestinians have resisted the Occupation Forces in every occasion, whether it be against their repeated attacks on Al-Aqsa, aggression on Gaza, or raids on Palestinians villages in Jenin and other places in the occupied West Bank.

With the brutal assassination of Palestinian journalist Shireen Abu Akleh and the violent attacks on mourners at her funeral, once again the world has seen the sheer violence of the Zionist project and the Israeli state. While it continues to enjoy financial and political backing from the United States, United Kingdom, and other global north countries, more and more, the people of the world are standing in solidarity with Palestine and rejecting the actions of Israel.