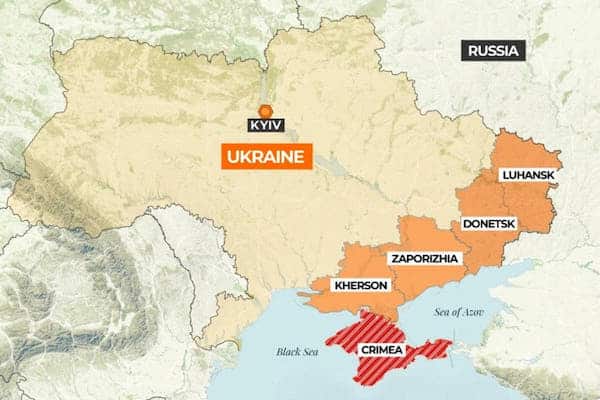 The Narrative Of Sham Elections

Every mainstream media outlet described the referenda in September in the Donetsk, Lugansk People’s Republics (LPR and DPR), Kherson Region and part of Zaporozhye as a “sham” and therefore “rigged.” The results were certainly not what one finds in Western style party political contestations:

So, it is very easy to pass these results off as “rigged” to an audience that has not investigated beyond what main stream Western media choose to report. But to equate what was going on there with what is going on in the West is sheer idiocy. To see why the vote went the way it did, follow the reports of Patrick Lancaster, Eva Bartlett, Graham Phillips, or others on the ground; or if you don’t trust them just consider how deeply entrenched in 2010 the support for Yanukovych was in these areas (around 90%), and how ethnic Russians had been treated since the Maidan, and who therefore fled Eastward into these regions (a million or so fled to Russia).

Also recall that Zelensky, a Russian-speaking Ukrainian, was voted in because he was supposed to be able to unify the nation by mending economic and political relations with Russia. He couldn’t, because the polarization of the country had become so much worse since the Maidan. The Maidan meant that never again would Eastern Ukrainians electorally determine their own political and economic future.

Be that as it may, the question of whether these elections were a sham or not is easily addressed—because there were international observers throughout the election process, whose reports we provide below:

The international observers who participated in the observation of the referendum on the accession of the Donetsk and Lugansk People’s Republics and the Kherson and Zaporozhye regions to the Russian Federation took part in a special briefing at the Civic Chamber of the Russian Federation. They spoke about their impressions of the plebiscite.

Alena Bulgakova, Deputy Chair of the Coordination Council for Public Oversight over Voting under the Civic Chamber of the Russian Federation, opened the meeting. She thanked the foreign guests for their willingness to learn the truth about the situation in the regions against all odds.

“For the residents of the DPR, LPR, Zaporozhye, and Kherson regions, the referendum is a right that they have earned with blood. The events that have been taking place for eight years have hardened the character of the people to the point that they are no longer afraid of anything. The people have made their decision. It is important to each of them because they are determining not only their own fate, but also the fate of their children and loved ones,” she emphasized.

Alexander Kofman and Alexey Karyakin, Presidents of the Civic Chambers of DPR and LPR, noted that Ukraine itself succeeded in making Donbass want to secede. They stressed that the referendum was a long-awaited event for the republic’s residents.

Maxim Grigoriev, Chair of the Coordination Council for Public Oversight over Voting under the Civic Chamber of the Russian Federation, pointed out that the U.S. and European countries do not recognize the referendum results for political reasons.

“They were well aware of what was going on during those eight years of civil war in Ukraine, they were well aware of how many children had died, they were aware of how the Kiev regime was torturing people, killing people, what it was doing, just as they are aware that it is Western weapons that are now shooting at civilians in those republics that voted to separate from the Kiev regime, to be part of Russia,” he pointed out.

During the first three days of the referendum, Donetsk was shelled 115 times, Alexander Malkevich, Deputy Chair of the Coordination Council for Public Oversight over Voting under the Civic Chamber of the Russian Federation stated.

“This is hatred, hatred against people who have made their choice. Over the past six months, the residents of Kherson and Zaporozhye regions have finally seen the true attitude of the Kiev regime toward them. The bombings, shelling, terrorist attacks, and murders. And from Russia’s side – care, repair of roads, payment of pensions, etc.,” the speaker stated.

The people of Donbass want to vote and self-determine, and this must be encouraged, stressed Modli Kulikani, Chairman of the international relations subcommittee of the African National Congress Youth League.

“Nelson Mandela said: freedom for some is not freedom. We have an obligation to promote freedom around the world, and so we came to see that the voting process is legitimate, that people vote and participate voluntarily. We found that most people in Zaporozhye couldn’t wait to express themselves because many times the elites spoke for these people. The most important thing for us was to understand what people really wanted. We can say that the referendum was free and fair,” he stated.

“Ballots against bombs,” as William Parra, an independent journalist from Colombia, called the referendum. He stressed that the people of Donbass and the liberated territories expect the international community to respect their choice.

“To me it’s just a way out for people wanting to get out of the death game, expecting it to end faster. We expect peace and freedom for these people. The most important thing here is to call on the international community to respect their choices,” he stated.

No one can say that voting was done at gunpoint, said Purnima Anand, an international observer from India.

“Everyone came to the referendum to express support for what is being done in the Russian Federation in the face of the world community. We support this transparent referendum in our difficult times. We need to understand the pain that people in eastern Ukraine are experiencing. I think the UN Security Council and Russia will come to an agreement in the near future. We wish for peace and justice for all humanity, especially for Donbass,” she added.

Michael Radachovsky, political advisor to the European Commission, noted that there were no violations in terms of voting procedures at the polling stations he visited.

“We would like to thank the organizers of the referendum and of course everyone who gave their vote and expressed their position. The voting system was impeccably organized, there were no violations or attempts to falsify the election results,” the speaker added.

Other representatives of foreign countries also expressed their support for the referendum and the decision of the residents of Donbass and the liberated territories.

So, who is lying about these elections? The many international observers, or our leaders and our media who imagine that they always occupy the moral high ground? You decide.