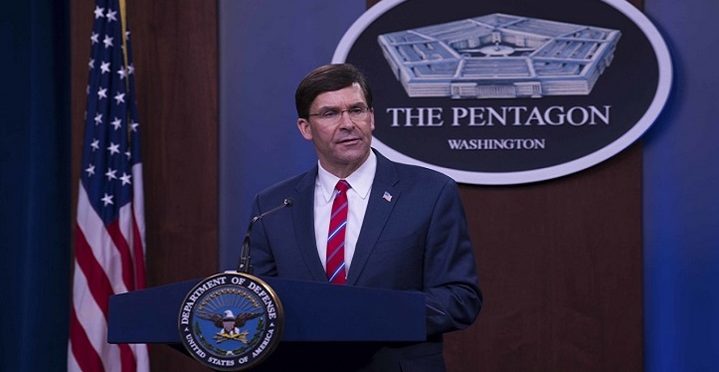 The National Security State Left Us Defenseless Against Coronavirus

Responsibility for pandemic preparation was privatized under the Obama and Trump administrations.

It’s time to face down the national security state that wasted trillions on imperial wars and abandoned Americans to fight coronavirus alone.

Donald Trump’s failure to act decisively to control the coronavirus pandemic has likely made the Covid-19 pandemic far more lethal than it should have been. But the reasons behind failure to get protective and life-saving equipment like masks and ventilators into the hands of health workers and hospitals run deeper than Trump’s self-centered recklessness.

Both the Obama and Trump administrations quietly delegated state and local authorities with the essential national security responsibility for obtaining and distributing these vital items. The failure of leadership was compounded by the lack of any federal power center that embraced the idea that guarding for a pandemic was at least as important to national security as preparing for war.

For decades, the military-industrial-congressional complex has force-fed the American public a warped conception of US national security-focused entirely around perpetuating warfare. The cynical conflation of national security with waging war on designated enemies around the globe effectively stifled public awareness of the clear and present danger posed to its survival by the global pandemic. As a result, Congress was simply not called upon to fund the vitally important equipment that doctors and nurses needed for the Covid-19 crisis.

At the heart of the growing coronavirus crisis in the US is a severe shortage of N95 respirators and ventilators. Those items should have been available in sufficient numbers through the Strategic National Stockpile (SNS), which holds the nation’s largest supplies necessary for national emergencies. But the stocks of crucial medical have not been maintained for years, largely because Congress has not provided the necessary funding.

Congress has been willing to dole out loads of cash after pandemics hit the US. When the H1N1 flu crisis hit the United States in 2009, and close to 300,000 Americans were hospitalized, Congress appropriated $7.7 billion in special funding, including support for building up the SNS. That allowed the stockpile to provide 85 million respirators and millions of ventilators to hospitals around the country, especially during the second half of the yearlong crisis.

But since that 2009-10 crisis ended, the stockpile of such vital equipment has never been replenished. In 2020 the stockpile holds only 12 million N95 respirators – as little as 1 percent of what is now needed by health workers – and just 16,000 ventilators, compared with the estimated 750,000 people at a minimum who will need a ventilator because of the Covid-19 pandemic.

These numbers are so scandalously low in relation to what is needed that senior officials Department of Health and Human Services have refused to reveal publicly how many they have in stock.

The failure to maintain those items in the stockpile was not the result of any lack of warning about the serious risk of a global pandemic that could be worse than any since the 1918 Spanish flu. It has been obvious that the frequency and ferocity of such rapidly spreading flu pandemics has been steadily rising throughout the 21st century.

The parade of recent pandemics began with SARS in 2002-3, continued with the much more serious H1N1 pandemic in 2009, and escalated with the spread of MERS IN 2012. Each one involved influenza viruses.

The H1N1 pandemic infected nearly 61 million Americans and hospitalized 274,000, causing 12,500 deaths. Another epidemic of the Ebola virus spread across much of Africa in 2014-16 but made only a slight appearance in the United States.

George Poste, a former director of Arizona State University’s Biodesign Institute with close ties to the US military-intelligence apparatus, warned in 2018 that even though the horror of the 1918 flu epidemic had not been repeated, it was “inevitable that a pandemic strain of equal virulence will emerge.”

Then, a week before Trump’s inauguration, Obama’s outgoing homeland security adviser, Lisa Monaco, organized a simulation based on how the administration would respond to what she called a “nightmare scenario”: a flu pandemic that forces a halt to international travel and causes a stock market crash and for which there is no effective vaccine.

In May 2018, Luciana Borio, the director for medical and biodefense preparedness on the NSC staff, declared publicly that a flu pandemic that we “know cannot be stopped at the border” was the leading health security threat, and that the United States was not prepared for it.

But neither the NSC office nor the NSC itself produced a major initiative to focus political attention on the pandemic threat. The office’s role, as described by Beth Cameron, who oversaw it, was limited to closely monitoring global health threats to provide early warning of any potential pandemic.

So when arch-militarist John Bolton promptly downgraded the office after becoming Trump’s national security adviser, it made little difference.

Responsibility for domestic preparedness for a pandemic has always belonged not to NSC but to the Department of Health and Human Services (HHS). HHS organized a month-long simulation in 2019 involving a number of federal offices that ultimately demonstrated how seriously unprepared the government was to cope with a pandemic. Following such an exercise, it should have been obvious that a new stockpile of necessary medical gear was urgently needed.

However, the HHS made no serious effort to replenish the country’s diminished stockpiles of masks, ventilators, and other critical supplies. And even if it had, it would have had to have competed with a much more powerful military-industrial complex for funding, and almost certainly would have failed.

Deeply entrenched bureaucracies and defense contractors dominate the federal government. Thanks to hefty campaign contributions and other benefits to members of Congress who control budgetary decisions, the national security state is easily able to secure its demands. In contrast, no such lobbying complex exists to ensure the country is adequately prepared for a pandemic.

In fact, as Greg Burel, the director of the US strategic stockpile from 2009 to 2021, explained, HHS and the Strategic National Stockpile lost all responsibility for sending N-95 masks and ventilators to state and local health services and hospitals in a national health emergency. Hospitals and state and local health departments must, therefore, compete with one another to obtain limited commercially available suppliers after they are already knee-deep in a pandemic.

Responsibility for the preparation for the most significant threat to US security – a pandemic that would upend the economy and society as a whole – was thus privatized under both the Obama and Trump administrations.

At the same time, a bipartisan consensus emerged around shoveling $15 trillion in taxpayer money into wars that had little to do with national security in any true sense and focused instead on the perpetuation of American empire.

The catastrophic human consequences of the failure to provide these essentials for a minimally adequate response should become the basis of a nationwide political movement that takes on the national security state and its deadly grip on Congress.

Multi-billion-dollar weapons systems may have provided lucrative kickbacks to members of Congress and spacious Northern Virginia McMansions to arms industry lobbyists, but they have not provided an iota of security from coronavirus.

Such a movement would have seemed impossible only a few weeks ago. But after decades of preemption of resources for the parochial interests of a self-serving national security bureaucracy and its elite political allies, it is clear that most Americans have been abandoned before a pandemic their leaders dismissed and ignored.

A simple insistence that the actual security interests of the American people be served, rather than those of militarists who have hijacked the concept of national security for their own self-interest, is paramount.

A movement demanding this radical shift could be driven by the very reasonable expectation that untold hundreds of thousands could die during a series of viral outbreaks throughout the next decade. As Dr. Peter Daszek, the president of the EcoHealth Alliance and a leading expert in predicting their impact of pandemics, recently told the Wall Street Journal, “We’re going to be hit with a much bigger one sometime in the next 10 years.”

Gareth Porter is an independent investigative journalist who has covered national security policy since 2005 and was the recipient of the Gellhorn Prize for Journalism in 2012.  His most recent book is The CIA Insider’s Guide to the Iran Crisis co-authored with John Kiriakou, just published in February.