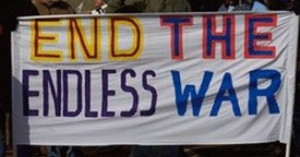 The Never Ending US Wars

Here’s a footnote to America’s present wars that’s worth pondering for a few moments. The U.S. Air Force is running out of ordinary bombs, smart bombs, and in some cases missiles. No kidding. The air war over Syria and Iraq that began in August 2014 and is now two-and-a-half years old has eaten through America’s supply of bombs.

The usual crew of weapons makers evidently can’t produce such munitions fast enough to keep up, so the U.S. military is, for instance, cutting into its stockpiles of smart bombs in Asia to send some to the Middle East and Africa simply to keep pace with demand — and, according to recent reports, it may nonetheless be failing to do so. Consider this a longer term problem since, in the era of Donald Trump, the generals are increasingly running their own wars, which, if the daily drumbeat of news about them is accurate, are only ramping up further.

Everywhere you look, from Yemen to Iraq, Syria to Somalia, the American military is growing more assertive as civilian casualties rise and constraints of any sort, whether on special operations raids, drone strikes, or the use of the most powerful non-nuclear bomb in the U.S. arsenal, fall away.

Only last week, for instance, came news that Trump’s generals plan to put recommendations on his desk soon to turn the tide in America’s longest war, the largely forgotten one in Afghanistan, which the U.S. military now refers to as a “stalemate.” (Who cares that, on the ground, the Taliban has in recent months seemed increasingly ascendant and the U.S.-trained, U.S.-supplied, and U.S.-backed Afghan military increasingly battered?)  Those recommendations — so claims acting Assistant Secretary of Defense for Special Operations Theresa Whalen — will help the U.S “move beyond the stalemate.” This will evidently be done by sending 3,000 to 5,000 more U.S. troops there to train the Afghan military.

Yes, you read that right. Almost 16 years after the invasion and “liberation” of Afghanistan in 2001, the solution to the never-ending war there is to send in a few thousand more U.S. military personnel to work with a force filled with “ghost soldiers,” into which this country has already reportedly poured $71 billion and which has suffered both staggering casualties and startling desertion rates in recent years. Just off the top of your head, tell me how you think that’s likely to go. And oh yes, once those troops are there, one thing that will certainly be needed: more bombs and missiles to support their activities.

All of this is part of what TomDispatch regular Army Major Danny Sjursen, author of Ghost Riders of Baghdad: Soldiers, Civilians, and the Myth of the Surge, refers to today as the U.S. military’s “more” strategy.  With the generals ascendant in the Trumpian universe and all those stars twinkling in Washington’s firmament, “more” is distinctly in the saddle. Whether in Afghanistan or in Syria and Iraq, where that massive air campaign against the Islamic State is now well into its third year, it has lent a significant hand to the rubblization of major cities across both of those countries. (In Syria, the Russian and Syrian air forces have offered a similarly helping hand in the process, as has ISIS with its suicide vehicles and booby-trapped buildings.)

As a result, while the Islamic State is not yet defeated, the region is now in genuine chaos, overrun by millions of uprooted refugees from countries increasingly in ruins and in disarray.  In other words, what started as a “war” against al-Qaeda, a modest-sized group of fanatics largely located in Afghanistan (with scattered cells of followers elsewhere), has now become a catastrophe stretching from Afghanistan to the former state of Libya in North Africa and beyond.  As ever, the American solution to this crisis, as Sjursen points out, is: more!