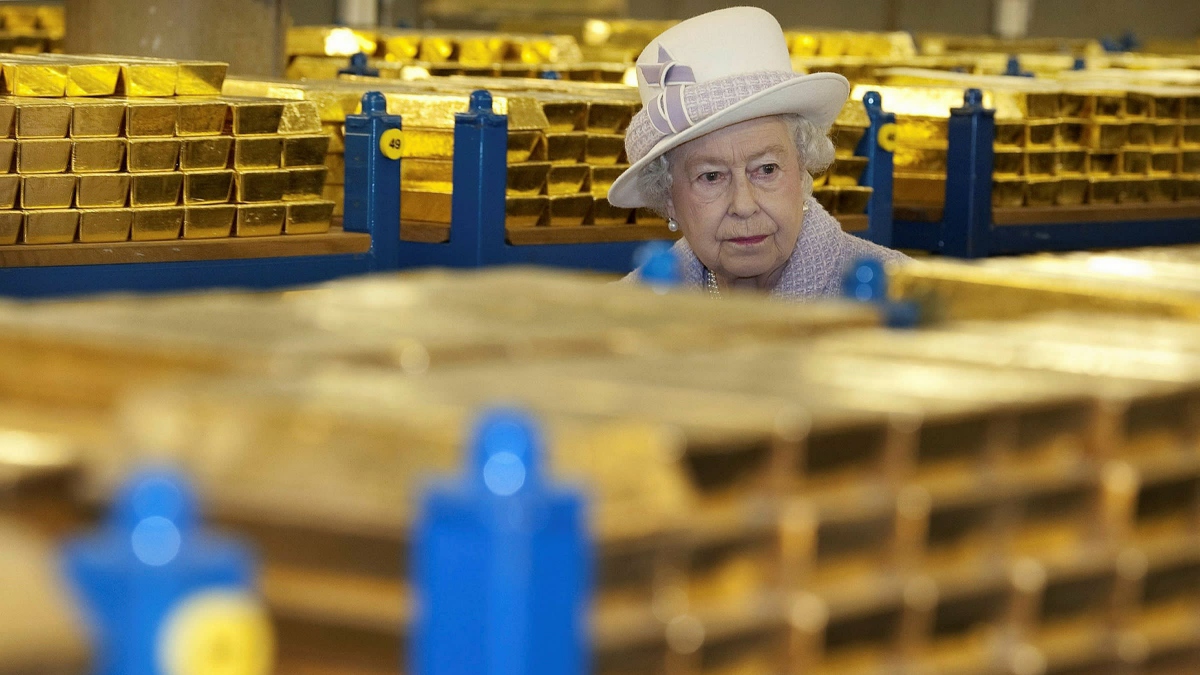 The New Pirates Of Ancient Albion

London’s refusal to return Venezuela’s gold is a mere continuation of its historical colonialist plundering.

The English High Court ruled earlier this month that the virtual and self-proclaimed “interim president” (Washington’s puppet) Juan Guaido and not the Venezuelan state should administer the 31 tonnes of gold reserves stored in the UK (1). This debacle proves that national and international law are no longer worth a dime, and represents a contemporary act of stale piracy by ancient Albion (2).

The trial in England for Venezuela’s blocked assets began in London on June 22 and concerned US $1.3 billion of state property. For decades, successive governments, even before Chavez, used the country’s gold bars in the Bank of England’s underground vaults in international financial transactions.

Twenty percent of the world’s gold is kept in these vaults, in what is a legacy to colonial-time dynamics. Most of it has been left under lock and key by governments of more than 30 countries, which pay a commission for the storage.

Today, the Bank of England refuses to fulfill its contractual obligation to return these bullions. Is this “lawfare” or just another way of plundering nations’ belongings, simply to use them against them to fund invasions, subjugation and the offering their natural resources to transnational companies?

For obvious reasons, the unruffled British sectors belonging to Her Majesty’s government do not consider expropriating the assets of the bloodthirsty sheikhs who control the “democracy” of Saudi Arabia, but rather follow the same manual as Donald Trump, who also handed over CITGO, the US-based subsidiary of Venezuela’s state-run oil company PDVSA, to Guaido himself.

Furthermore, when Trump needed to take control over Bolivia’s gas and lithium, he did not hesitate to use the Organization of American States (OAS) – and its hitman Secretary Geneal]Luis Almagro – to declare an electoral fraud that never existed and deliver the country to the partners of Bolivia’s genocidal aristocracy. Let us remember that Guaido was sworn in and recognised by the US at the beginning of 2019 in the same fashion, with several countries linked to the US recognising his “authority”. One doesn’t have to be a seasoned connoisseur of the situation to know that none of the members of Guaido’s so-called Central Bank “administration” reside in Venezuela: they all live in the United States, except one who is in Colombia.

The UK government is one of the scoundrels involved in this scenario. As large landowners, racists, pirates, exploiters and looters, they have a stale tradition of criminal ancestry.

Piracy is not new to the UK government, and we must remember that it still retains several colonies in our region: Anguilla, Bermuda, the Cayman Islands, South Georgia and the South Sandwich Islands, Malvinas Falkland Islands, Pitcairn Islands, Turks and Caicos Islands, British Virgin Islands and the British Antarctic Territory.

What can you expect from a thalassocratic empire (a state whose domains are mainly maritime) that was formed through looting, piracy, plundering, trickery and slavery, and whose leading members come from yesterday’s privateers and today’s globalised buccaneers? A quick visit to the Looting Museum of London, also called the British Museum, demonstrates the range of objects plundered from other nation’s ancient cultures, evidence not of different cultures but of barbarism and imperial robbery.

After Pope Alexander VI divided the Americas between Spain and Portugal, the French and English monarchs, as well as the Lords of Holland, began a race to contest New World hegemony.

In order to cut off communications between the Americas and the Iberian peninsula, they began to deal with naval highwaymen – who in times of war with other kingdoms are called privateers and in times of peace are called pirates. This led to an uninterrupted battle lasting three centuries that culminated in global British hegemony.

In 1576, pirate Andrew Barker stormed Venezuela’s Margarita Island, which was also looted in 1583 by William Hawkins. In 1596, Leonard Berry entered eastern Venezuela, and the following year privateer Charles Leigh did likewise. The Dutch also joined the looting, and amid another flurry of assaults on the Venezuelan coastline, English privateer Charles Leigh lashed out against the same region in 1602, with pirate Robert Harcourt also storming Trinidad and the Orinoco basin in 1608. In the following year, Thomas Roe invaded through the Amazon and Orinoco rivers.

In 1595, Sir Walter Raleigh – seafarer, privateer, writer, courtier and English politician, who popularised tobacco in Europe – ventured once more into Trinidad, his men stormed the Orinoco River, and the knight was defeated in his project to make eastern Venezuela an English colony.

Raleigh’s 1595 book, The Discovery of the Large, Rich, and Beautiful Empire of Guiana, propelled the legend of El Dorado, which gave rise to numerous editions and translations, as well as new books related to the legend. He coined the vanguard slogan of the English empire: “Whoever owns the sea, owns the whole world.”

Even Colombian Nobel Prize winning author Gabriel García Marquez mentioned the legend in his book One Hundred Years of Solitude, saying that it was he (Raleigh) who gave his accordion to Colombian legend and founder of the local vallenato music Francisco el Hombre. But it is, perhaps, Uruguayan writer Eduardo Galeano, who best explains the relationship of the time: “Devious financial deals abducted countries and cooked them up if they failed to pay the ransom. The global economy is the most efficient expression of organised crime.”

“International agencies that control currency, trade and credit practice terrorism against poor countries, and against the poor of all countries, with a professional frigidity and impunity that humiliate the best of those who resist,” Galeano reminds us.

But greed, which never dies, will keep the plundering plan alive until the Essequibo Strip, a fundamental and inalienable part of Venezuelan territory, is snatched from the country by imperialist forces in complot with transnational pirates such as US oil giant Exxon Mobil, which has recently carried out illegal oil exploration in the strip’s territorial waters.

Twenty-first century pirates no longer need to storm foreign ships, now they storm banks, too. This was the case with the disappearance – or rather the theft – of Libya’s US $300 billion of foreign reserves, US $168 billion of which was in gold. The promised humanitarian aid never arrived after Muammar Gaddafi was murdered and the country was destroyed.

Large part of Venezuela’s gold was repatriated between 2011 and 2012 by President Hugo Chavez, and the nation is currently the top Latin American country in terms of gold reserves, with 161.2 tonnes in total, of which 31 tonnes (19.2 percent) have been kidnapped by the Bank of England.

Part of this gold was formerly held by US based bank Citibank, which should have returned it after they ended operations in Venezuela. However, Citibank decided to hand it over to their English peers, alluding that Trump’s sanctions impeded it from repatriating the assets back to Venezuela, essentially invoking a modern day letter of marque (3).

“It is theft. Due to actions like this, the most famous pirates in the 18th century were the English privateers, they all followed the British Crown (…) The UK violates international law and intends to steal Venezuelan resources,” Caracas’ Foreign Minister Jorge Arreaza has said.

As the Bank of England is allegedly only the custodian of the gold, Venezuelan authorities have proposed that “these resources should be used on the basis of an agreement with the United Nations Development Programme (UNDP) to purchase medical equipment and supplies needed to deal with COVID-19.”

With what right, based on what law, on whose account does this new Holy Alliance of NATO-occupied countries called the European Union sanction Venezuelan officials or recognise usurpers not voted in by anyone? – asks Venezuelan writer Luis Britto Garcia.

Evidently, the long-standing habit of being perpetually occupied by foreign troops makes them EU countries forget what sovereignty and independence mean, despite the absolutists of the Old Continent being rid of colonial-era offices like Captain General or Viceroys in the America (or are they?). “I propose sending them a copy of our Declaration of Independence, to see if they dare to show us theirs,” challenges the Venezuelan intellectual Britto Garcia.

The finances of the privileged and almost mute royal family of Queen Elizabeth II are increasing, and many citizens are upset. The costs of maintaining the royals grew by more than 40 percent between 2018 and 2019, reaching US $104 million.

Time passes, and yet the UK maintains its most typical trait: piracy.

(1) The English High Court’s ruling did not explicitly assign control of the gold to Guaido’s team, but rather blocked Maduro’s attempt to control it, essentially leaving it in limbo for now. However, it has been reported that Guaido’s ad-hoc Central Bank board is due to file for control promptly.

(2) Albion is an alternative name for the island of Great Britain which has fallen out of common use in English. However, it is more precisely used to refer to Scotland in most Celtic languages.

(3) A letter of marque and reprisal was a government license in the Age of Sail that authorised a privateer or corsair to attack and capture vessels of a nation at war with the issuer. Once captured, the privateer could then bring the case of that prize before their own admiralty court for condemnation and transfer of ownership to the privateer. A letter of marque and reprisal would include permission to cross an international border to conduct a reprisal and was authorised by an issuing jurisdiction to conduct reprisal operations outside its borders.

Aram Aharonian is a Uruguayan journalist, a founding member of TeleSur and the president of the Foundation for Latin-American Integration (FILA). He also leads the Latin-American Centre for Strategic Analysis (CLAE).