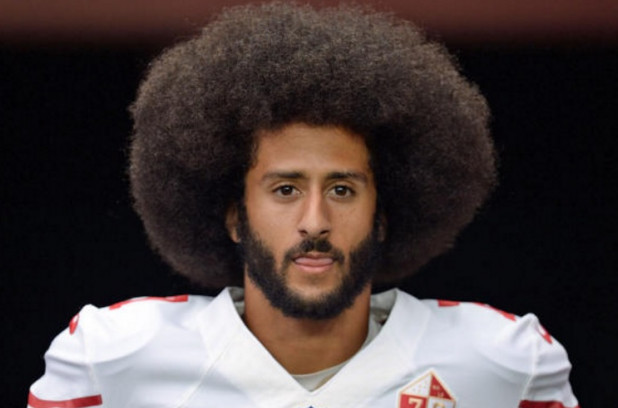 The NFL Player’s Association just picked a free agent quarterback as their Week 1 MVP for his charity work, even though he didn’t even make it onto the field.

Colin Kaepernick has been blackballed by the NFL’s ownership – 97% of which is composed of enormously wealthy, mostly conservative white males – over his controversial stand to peacefully protest racial injustice by kneeling during the national anthem while playing for the San Francisco 49ers last year. Kaepernick guided the Niners to a Super Bowl just four years ago, turning in a stellar performance while his team came up just short against the Baltimore Ravens.

Now, he’s still making good on his pledge to donate $1 million to charity, even though he’s unemployed. The Chicago Tribune reports:

The NFLPA found particularly impressive, Kaepernick’s continued donations to charity, including a Sept. 7 gift of $100,000 split between four organizations.

Kaepernick, who some say hasn’t been signed by an NFL team due to his political activism, gave $25,000 each to DREAM, a New York City after-school program that promotes sports in urban neighborhoods, the Gathering for Justice’s War on Children, a forthcoming initiative to tackle child incarceration, United We Dream, an organization focused on empowering immigrant youth and the Coalition for the Homeless.

“Kaepernick followed this up three days later with a Back to School Backpack Giveaway at the Lower Eastside Girls Club of New York, which connects girls and young women to entrepreneurship opportunities, healthy meals and STEM workshops,” NFLPA said in a statement.

His goal, as set forth last year, was to donate a total of $1 million to organizations that help minorities and other oppressed communities. Earlier this month, Kaepernick said he had so far donated $900,000.

The NFL’s ownership still wants to pretend that politics and sports have nothing to do with each other, but let’s just take a look at the most egregious example of a team putting politics over winning; the New York Jets.

I mean, they really, really suck.

The Jets suck because they don’t have a serviceable, NFL quarterback.

It’s so bad, that pundits began asking what Jets fans would call the team’s attempts to lose every game this year, in order to draft a good quarterback, in July!

Yet, the New York Jets refuse to sign Colin Kaepernick, even as a backup, because they don’t want politics to be a distraction.

Perhaps it has something to do with President Trump appointing the owner of the New York Jets – major campaign donor and racist old fart Woody Johnson – as his Ambassador to the United Kingdom. Apparently, that’s not too political for the team to endure, but Kaepernick would distract Jets fans too much, ostensibly with winning football games.

Instead, Johnson’s team is treating long-suffering Jets fans to a washed up 38-year-old NFL has been as their starting quarterback, and keeping not one, but two other backups so awful, that couldn’t beat out their journeyman starter. But all three of the Jets quarterbacks are white, and likely none will take a stand for civil rights, so their fans will have to make due.

The Jets’ bad decisions have caused ticket prices to drop by 70% since moving to a new stadium in 2010, but even still they’d even prefer to make the political decision this year to lose even more money than hiring Colin Kaepernick to presumably try and win a few more games.

This isn’t the first time that the NFL has had to overcome institutional racism as a league, for example when they instituted the Rooney Rule in 2003 to bring more African-Americans into the ranks of Head Coaches and front offices.

It’s long past time that the NFL’s owners cease blacklisting Colin Kaepernick while teams are putting a putrid product on the field.

Here’s a video from ESPN with the best explanation why Colin Kaepernick is being unfairly punished by the NFL for speaking out on important social issues:

This clip of Max Kellerman speaking on Colin Kaepernick and racial injustice as a whole is a must-watch.pic.twitter.com/QbhhlYH2dx