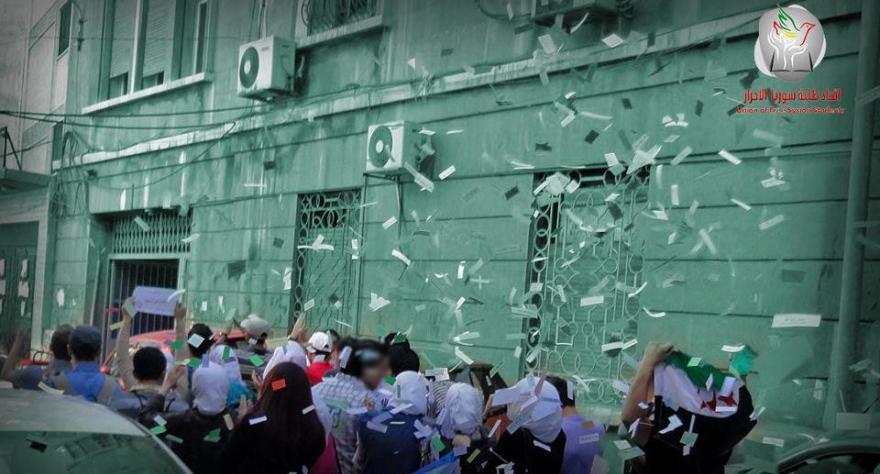 The Nonviolent Roots Of Syrian Rebellion: Students United Against Tyranny

Above: Students throw scraps of paper with the names of besieged cities and detainees near the Parliament in Damascus. Source: The UFSS´s Facebook page.

When a group of students staged the first demonstration at the Damascus College of Science in April 2011, they could not imagine that would be the beginning of the future Union of Free Syrian Students (UFSS). The Union, which has played a fundamental role in the Syrian uprising, remains one of the most relevant youth groups developing civil resistance in the country.

The birth of the Union of Free Syrian Students

“At that first demonstration, 50 of us had planned to gather to demand freedom, justice and dignity,” one of the organizers said to Syria Untold. “We were amazed when we saw hundreds of students show up.”

After that first protest, which was recorded and widely shared online, professionalization and self-protection became a goal for the students. It became clear that there was an urgent need to protect demonstrators by concealing their identities on camera, which led to an increasing effort in hiding people´s faces on pictures and videos.

As the regime’s crackdown against protesters increased, the group called for boycotting practical exams in solidarity with revolting areas like Daraa, Banias and Duma. More than 90 percent of the students at the University of Science joined the boycott and refused to sit their exams.

The success of those initiatives, together with the need for professionalization and self-protection, led the students to form a Union, in an attempt to consolidate and amplify the scope of their work. In October 2011, the UFSS was born, and most Syrian universities with revolutionary activities throughout the country established a branch.

The main goal of the Union was to organize civil disobedience at the university and encourage others to break the wall of fear and join the uprising. They challenged the Syrian Student Union, a body that has been closely linked to the regime, and to which they refer to as “the regime´s fifth column.” Though the Student Union’s duty should have been to protect students, it did the exact opposite, aiding in the arrest of those involved in the on-campus movements. In its initial stage, the Damascus branch of the Union was mostly confined to the university, with demonstrations and sit-ins on campus and some marches on Mezzeh street and by the Iranian embassy. At that time, student Lehman Qadri was arrested.

The next stage involved taking the initiatives off campus. In collaboration with other groups and local coordination committees, they focused on “flash demonstrations,” protests under five minutes long in central districts of the country. These demonstrations were bustling with creativity, with protesters demanding the release of all political prisoners, the end of tyranny and the overthrow of the regime through witty banners and slogans.

On more than one occasion, demonstrators threw graduation caps in the air after marking them with freedom slogans. As the crackdown against every form of opposition continued, the Union increased the scope and creativity of its work. They raised the independence flag over several bridges, parks and districts throughout the country, posted independence flag stickers, placed speakers that amplified freedom slogans and songs throughout campus, poured red paint on the streets, threw scraps of paper with the names of besieged cities and detainees, and broke their pencils in solidarity with students arrested by the regime, among many other campaigns.

Among the most renowned campaigns of the Damascus branch is the Freedom Pigeons campaign, which consisted of releasing pigeons carrying the names of detainees to fly over Damascus. Activists wrote the names of many of the early detainees in Syrian jails and tied the papers to the legs of pigeons, which were later smuggled to the mountain of Qasioun, overlooking the capital.

At the same time, they continued boycotting exams in solidarity with the cities under siege, and organized campaigns against tyranny in the most important markets of Damascus, such as Bab Srije, Medhat Pasha, and Shaalan, where they threw leaflets and posted stickers on stores to raise awareness among merchants and salespersons.

Evolution as a response to militarization and extremism

Over time, the students became increasingly professionalized and specialized, associating with other work groups and committees in areas such as health aid, media outreach, and verification, documentation and archiving of regime violations against students in Syria. Students of chemistry in the College of Sciences put their education to good use. They began manufacturing some of the items needed at medical points, a project which was funded by members of the Union themselves. For example, they helped field hospitals by manufacturing the chemical additives needed in blood bags. They also put together special flammable material that would burn for a longer time to allow the activists to scupper away after a demonstration by making a barrier of fire between them and the regime’s thugs. Longer-lasting fires meant more time to get away from security forces, and a decreased chance of them getting caught and arrested.

Another task the revolutionary chemistry students took on was filling balloons with helium so they could fly over the city. Initiatives were not limited to public universities but gradually spread to private universities, such as Qalamon, which staged a large sit-in in November 2012.

The Union has faced endless obstacles and an increasing crackdown by the regime. Many of its activists have been killed, arrested and detached from university life.

In addition to that, the Union has started running out of funds to continue their work. The situation has led to the Islamist agenda waved by groups such as the Islamic State of Iraq and Syria (ISIS) affecting the Union’s activities. By the end of 2012, Islamist banners and slogans could be seen on campus next to the independence flag and the students’ freedom demands.

Today, most of the Union’s work focuses on humanitarian and health aid, as well as on reporting and media activities. They evolve in response to the reality on the ground, which has evolved from a peaceful civil uprising to increasing militarization and Islamization, amid international indifference. In spite of everything, the Union, as many other civil activists, continues to resist all those trends, aiming for a future of freedom, justice and dignity.

Founding statement for the union of Free Syrian Students

Since the beginning of the peaceful popular revolution in Syria in 15 March, students were one of the firsts to participate in demonstrations demanding freedom and dignity in the face of oppression, dictatorship, corruption and a single-party governance system that controls all aspects of the government. All of which have been enforced and practiced by the Syrian regime for decades now.

This revolution was confronted by the Syrian regime from the first day, using their army and intelligence forces as well as gangs of thugs. This spread the demonstration to larger areas, making the revolutionists more determined to march forward with this revolution until the regime’s downfall, for it lost its legitimacy since the first bullet was fired at peaceful unarmed demonstrators.

Since the illegitimate regime continues killing, displacing and detaining people, affecting tens of thousands of victims; and since we were never distant from the nationalist movements throughout modern history, proving to the world that students are the heart of revolutions and its everlasting fuel, we believe that it is time revolution reaches the fences of all our universities.

In conjunction with the launch of the new academic year, we find it important to have an organization body that groups all revolutionary students. Consequently, we are launching the Union of Free Syrian Students to be the democratic, political and syndicalistic station in the life of the free Syrian students’ movement.

The main goals of the Union of Free Syrian Students are:

• Work closely to organize demonstrations and general strikes inside universities and schools, and outside them in civilized and humanitarian ways while being committed to the peacefulness of these activities.

• Work together with the rest of the revolution’s groups, unions and committees in order to topple the regime that has already lost its legitimacy, while maintaining national unity in the process.

• Work on building a civil state that has a democratic and pluralistic system to ensure freedom, justice and equality for all citizens

Victory to our revolution

Shame and disgrace to the killers

Freedom for our detainees