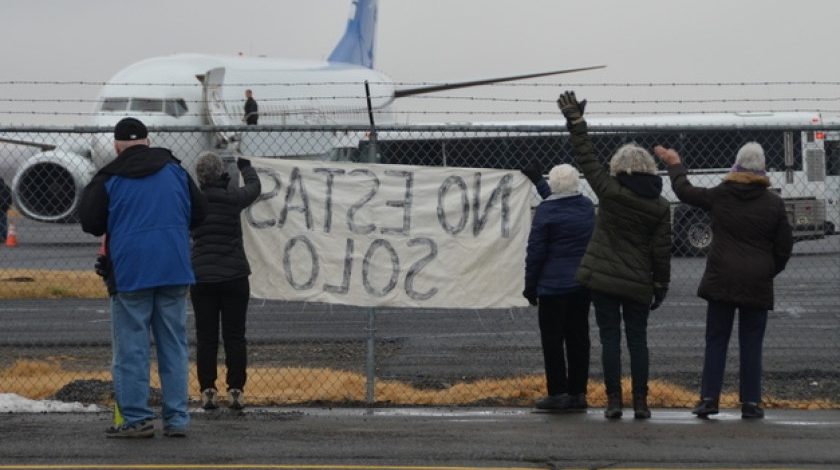 The Northwest Turns Up The Heat On ICE

Yakima, Wash. — A man in handcuffs locked to a belt chain trudged up metal stairs, eyes fixed on the door of a U.S. Immigration and Customs Enforcement charter plane bound for El Paso.

He turned and brightened when gusts carried the shrill tone of a whistle blown by one of a dozen activists 50 yards away. “No estas solo!” — You are not alone! — the activists yelled across the tarmac from behind chain-link and barbed-wire fencing.

Awkwardly, the man with a goatee and glasses — one of 51 unidentified detainees dispatched on a recent Tuesday by ICE — twisted his right wrist to wave.

Much of the focus on President Trump’s immigration crackdown has been at the U.S.-Mexico border, which has seen a surge of Central American asylum seekers hoping to cross into the United States. But more than 1,000 miles to the north, ICE finds itself bedeviled by activists, attorneys and politicians in the Pacific Northwest who are determined to gum up the machinery of immigration enforcement.

Their efforts have “significantly impacted” the agency’s ability to carry out its mission this year, according to Tanya Roman, ICE spokeswoman for Washington, Oregon, Idaho and Alaska. “State and local efforts thwarting ICE operations serve only to create additional security concerns and add significant delays and costs to U.S. taxpayers,” she said in an emailed statement.

None of these steps appeared to perturb ICE officials as much as a decision in April by western Washington’s King County to ban agency flights from Seattle’s Boeing Field. County Executive Dow Constantine said in his order that deportations raised troubling human rights concerns, “including separations of families … deportations of people into unsafe situations … and constitutional concerns of due process.”

ICE officials, turned down by other Northwest airports, were forced to switch the flights to Yakima, more than 100 miles to the southeast. Incoming and outgoing detainees are bused for hours across a snowy mountain pass between the central Washington farming hub and an ICE detention center in Tacoma.

The flights from Boeing Field had transported more than 34,000 detainees since 2010, according to public records obtained by the University of Washington Center for Human Rights. Planes most often flew to either Mesa, Ariz., or El Paso. From there, deportees were delivered to domestic detention centers, bused across the Mexican border or put on connecting flights to other countries.

ICE persists with its mission despite “severe challenges” that the flight relocation and other restrictions pose, Roman said. “We will continue to do our sworn duty to seek out dangerous criminal aliens and other immigration violators,” she said.

In a statement reacting to the Oregon courthouse arrest ban, ICE said it had turned to arresting immigrants at courthouses because of policies preventing county jails and state prisons from transferring inmates to the agency. “A courthouse may afford the most likely opportunity to locate a target and take him or her into custody,” Roman said.

“Federal immigration officials are arresting people with no criminal history at all,” Ferguson said at a news conference. “As a result … individuals are refusing to participate in our justice system.”

Resistance to Trump’s immigration policies began in the Northwest soon after his election.

“We saw people rallying on the immigration issue who were so horrified by what they were seeing, whether it was the Muslim ban or cruel and misguided policies at the southern border,” said Enoka Herat, ACLU police practices and immigrant rights counsel in Seattle.

She was referring, in part, to Trump’s moratorium on admissions to the U.S. by people from a list of predominantly Muslim countries. The administration also came under fire for its family separation policy on the border and, later, its “Remain in Mexico” program, which keeps Central American asylum seekers waiting in Mexico.

Inslee signed an executive order in February 2017 restricting state agencies from helping to enforce federal immigration laws. But a year later, the Seattle Times reported that the Department of Licensing in Washington, a state that allows undocumented immigrants to get driver’s licenses, routinely gave ICE personal information that agents used to arrest and deport people.

Inslee told the department to stop sharing the data.

Refugee-rights groups formed a coalition after Trump was elected called the Washington Immigrant Solidarity Network, which has grown to include more than 100 organizations. The network operates a statewide hotline taking information on ICE and Customs Border Patrol raids and detentions. It trains and dispatches teams of lawyers and volunteers.

“When a call comes in about a raid, a team will go and begin to document by taking pictures, documenting the number of officers there, what types of vehicles they’re driving and who they are questioning,” said Brenda Rodríguez López, solidarity network coordinator. “The team meets with families, provides them with moral support, connects them to local resources and accompanies them to court hearings.”

Activists follow detainees through the process, protesting conditions at the Northwest ICE Processing Center in Tacoma, a facility run by the GEO Group where as many as 1,500 people are held. Longtime Seattle-area resident Maru Mora-Villalpando, who leads weekend protests outside the center, is herself an undocumented immigrant, a status that she doesn’t hide as she needles ICE.

At a demonstration in October, Mora-Villalpando said that about 200 detainees were staging a hunger strike to protest conditions at the center, where inmates said they had found maggots in food. Roman said that allegations of the center’s kitchen being shut down and meals not being served were “false, and simply another attempt from local advocacy groups to deceive the public.”

Mora-Villalpando tracks detainees on behalf of their family members as they leave the center and head for deportation. She receives spreadsheets tabulating numbers of deportees from the Yakima Immigrant Response Network, a group of volunteers who observe the ICE flights.

At the Yakima airport, Michael Collins, a retired medical clinic business manager, takes photos of each detainee getting on or off a flight. He erects a camera tripod in a city-designated viewing area by the airport fence.

“It’s just an act of witnessing, but I think it’s very important,” said Collins, 71, who participated in the civil rights movement in his native St. Louis. “It’s an opportunity to stand up against the cruelty that’s taken over the government.”